Today’s Comment opens with several big and broad crises, including the global energy crunch, China’s clampdown on private firms, and Chinese debt issues.  We also cover other foreign and U.S. developments, and we wrap up with the latest on the coronavirus pandemic.

Global Energy Crisis:  As natural gas, crude oil, and other energy prices continue to rise in response to recovering demand and faltering supplies, we see many new examples of the negative economic and political impact.

Chinese Financial Industry:  In an exclusive report, the Wall Street Journal said President Xi launched a sweeping examination of major state-owned banks, investment funds, and financial regulators to determine whether they’ve become too chummy with private firms, such as the technology giants that Beijing has been working to rein in over the last year.  China’s top anticorruption agency leads the examination and focuses on 25 financial institutions at the heart of the Chinese economy.  It is part of his broad effort to steer China’s economic system away from Western-style capitalism in the run-up to a leadership transition late next year when Xi is expected to sidestep convention and continue his rule beyond the usual two five-year terms.

Japan:  Even though much has been made of new Prime Minister Kishida’s trial balloon regarding a hike in the country’s capital gains tax, which has weighed on Japanese equities despite the prime minister’s effort to walk back the idea, both the ruling Liberal Democratic Party and the opposition are arguing for greater income redistribution ahead of the October 31 parliamentary elections.  In a recent parliamentary debate, Constitutional Democratic Party leader Yukio Edano vowed to provide those with low incomes a yearly ¥120,000 cash handout along with other immediate financial benefits and effectively exempt from income tax individuals whose annual salary is about ¥10 million or less per year.

United Kingdom:  Prime Minister Johnson’s office confirmed that Chancellor of the Exchequer Sunak is considering a rescue plan to help the steel industry and other energy-intensive sectors through a winter of soaring gas prices.  Sunak is reportedly considering a proposal that will include loans and other support with a value in the low hundreds of millions of pounds.

U.S. Debt Limit:  The House of Representatives today is set to vote on last week’s Senate-passed legislation raising the federal government’s borrowing limit into December, temporarily staving off default while lawmakers battle over setting a new ceiling for U.S. debt.  The bill would increase the debt ceiling by $480 billion, an amount that the Treasury Department has said would allow the U.S. to pay its bills through December 3, assuming it had also exhausted all of its cash-conservation strategies.

U.S. Fiscal Policy:  As Congressional Democrats debate how to cut the size of their big antipoverty and climate change bill, House Speaker Pelosi last night wrote in a letter to her colleagues that they should focus on providing rich funding for a limited number of initiatives, instead of spreading the available funding too broadly or for too short of a period.

Green Investing:  Against rising popular demand to clamp down on fossil fuel emissions, a renewed appreciation for nuclear energy and a roughly 37% jump in uranium prices has prompted hedge funds back into the sector for the first time since the Great Financial Crisis.  As one example of renewed interest, President Macron has said France would invest €1 billion in nuclear power by the end of this decade as Europe’s energy crisis spurs renewed interest in the source of power. 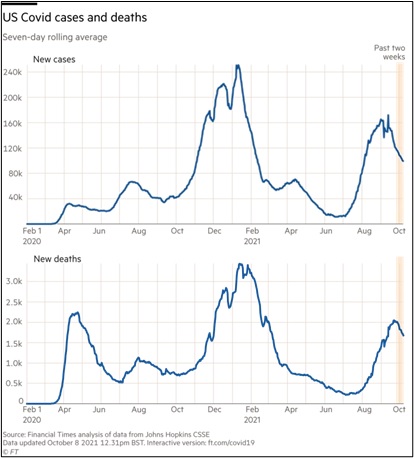