Good morning.  U.S. equity futures are up this morning.  A potential deal on the debt ceiling and relief on oil and gas prices have improved sentiment.  Our coverage begins with an examination of these two factors.  Up next is crypto news and an update on China, followed by the international roundup.  We close with economics and policy and the pandemic update.

What’s behind the rally?  Two developments seem to be lifting equity sentiment this morning. 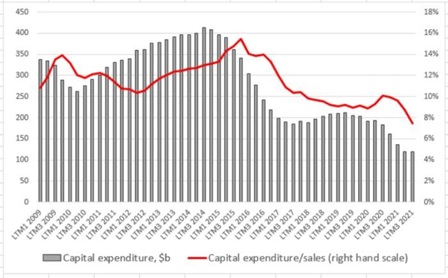 This chart shows the capital expenditures of public energy firms.  Since 2014, there has been a clear reduction in investment.  For energy firms, the fear is stranded assets.  If a future investment could decline to zero value in a few years, there is little sense in making that investment.  And, since hydrocarbons are a depleting energy source, slowing investment means less supply.  Higher prices should not be a shock to anyone.  If the goal is to reduce hydrocarbon consumption, the increase in price aids in that goal.  In fact, it could be argued that ESG has effectively created a carbon tax, but the revenue from the tax is going to energy companies instead of governments.  The problem for politicians is that higher prices are unpopular.  Even with changes in governments, we suspect this trend is in place.

Crypto:  The SEC wrangles with Congress and the DOJ sets up a task force.

International roundup: The German Greens/FDP have picked the SDP, and Putin faces a new internal threat.

Economics and policy:  Powell looks safe, and there is new hope regarding malaria.

COVID-19:  The number of reported cases is 236,612,988, with 4,830,359 fatalities.  In the U.S., there are 44,060,356 confirmed cases with 707,797 deaths.  For illustration purposes, the FT has created an interactive chart that allows one to compare cases across nations using similar scaling metrics.  The FT has also issued an economic tracker that looks across countries with high-frequency data on various factors.  The CDC reports that 480,427,985 doses of the vaccine have been distributed with 398,675,414 doses injected.  The number receiving at least one dose is 216,012,495, while the number receiving second doses, which would grant the highest level of immunity, is 186,385,751.  For the population older than 18, 67.5% have been vaccinated.  The FT has a page on global vaccine distribution.  The Axios map shows definitive improvement in the spread of the disease.