[Posted: 9:30 AM EDT] It’s Fed day!  The FOMC meets today but it is one of those meetings without new forecasts (“dots”) or a press conference.  Thus, we are expecting no change in rates or in the statement.  We are seeing some consolidation in equities this morning after a strong rally yesterday.  Here is what we are watching this morning:

More on the midterms: We have some additional observations about the impact of the midterm elections:

Waiting didn’t help foreign nations—China and the EU were stalling on trade talks, perhaps hoping for a Democratic Party sweep of Congress that would reduce the power of the White House.  Although this was a long shot, the costs of waiting weren’t all that high.  But, given the result, we would look for more serious negotiations to begin.  The U.S. will likely meet with China at the G-20 and we would expect EU negotiators to move faster now.[1]  The EU will be particularly concerned with the potential for auto tariffs.

The bond market is worried about GOP fiscal management, or worse—Yesterday, we noted the market volatility surrounding shifts in election forecasts that led to some violent moves in the Treasury market.  To reiterate, 528, Nate Silver’s site, shifted the odds of a GOP hold on the House that led to a spike in Treasury yields.  The forecast was being driven by partial results and, in retrospect, was probably too sensitive to this data.  The jump in yields was either due to fears of further fiscal expansion or rising inflation expectations.  Comparing the TIPS yield to the nominal leads one to conclude that financial markets are starting to view the GOP as the party of reflation.[2]  We note that in yesterday’s trade the two-year yield rose while longer duration yields fell, despite a sloppy 30-year T-bond auction.  The flattening of the curve in the aftermath of the election suggests that fixed income investors view divided government as a check on spending and further tax cuts, and thus were willing to buy the long end of the curve.

How to think about investigations—The president wasted no time ridding his administration of AG Sessions.  There is much media frenzy over the appointment of a temporary head of the Justice Department and the Mueller investigation.  For now, we don’t expect these events to have much impact on financial markets.  The firing of Mueller won’t stop the House from investigating the White House.  The news on this front will be the focus of cable news but financial markets will still focus on the economy; turmoil means there will be less chance of tax law changes.  If the investigations begin to undermine confidence, then it will be time to worry.  But, there is no evidence to suggest that is in the offing.

Red states are supporting populism—Arkansas and Missouri both passed minimum wage hikes.[3]  Earlier this year, the latter state repealed right to work.  Although both are generally reliable GOP states, their voters are openly rejecting the free market ideology of the libertarian wing of the Republican Party.  We should also note the president hinted yesterday that he might be willing to claw back some of the recent tax cuts on higher income households to give the middle class more tax relief.[4]  In other words, investors should note that the GOP may not be a reliable partner in supporting the interests of capital as time passes.

The regulatory world is becoming less tech friendly—The incoming Congress will be populated with Democrats skeptical of the tech companies on privacy and the GOP is opposing the monopoly power of the platforms.  As time passes, the perception of the tech firms has steadily moved from their leaders being seen as folk heroes to being seen as predatory.  The risk of increasing regulation is rising.[5]

China’s trade data: China’s trade data for September did not show any significant effects from recent tariffs.  Import growth was robust, up 21.4% from last year, well above the consensus growth of 14.5%.  With import volumes up 15.4%, there may be some anticipatory buying underway.  China’s surplus with the U.S. hit a new record; more interestingly, China is running nearly balanced trade with the rest of the world. 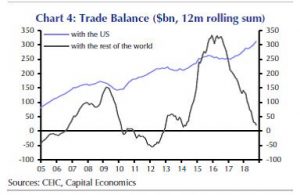 These numbers will tend to trigger tough rhetoric from the Trump administration and raise worries about further tariff measures.

Italian budget negotiations: The EU has raised its forecast for the Italian budget deficit, mostly by assuming a lower growth rate than Italy did in its budget calculations.[6]  Both parties appear to be in a standoff.  We still expect the EU to offer some concessions to Italy but the rhetoric makes it hard for the EU to compromise.  Meanwhile, Italy is using Brexit for leverage, suggesting it will support the British in their negotiations over leaving the EU.  Since the EU side needs unanimous approval, Italy’s threat may require the EU to offer concessions on the budget to secure its Brexit position.[7]

U.S. crude oil production continues to surge, rising 0.4 mbpd this week to 11.6 mbpd.  Although refinery runs did rise to 90.0% of capacity, it was only a 0.6% increase from last week.  Oil imports rose 0.2 mbpd, while exports fell 0.5 mbpd.  Needless to say, it was a bearish report.

We are approaching the end of the inventory build season.  Refinery operations should rise in about two weeks, which should reverse some of the recent inventory gains.

Based on inventories alone, the fair value for crude oil is $63.71.  Using the EUR as the independent variable, oil prices are fairly valued at $55.21 per barrel.  Using both, fair value is $57.61.  Simply put, the most bearish factor for oil now is dollar strength.  We do expect oil inventories to begin their seasonal decline into year’s end soon, which may offer bullish support in a deeply oversold market.  But, the dollar needs to weaken in order to stage a major rally.