[Posted: 9:30 AM EST] We are seeing significant market moves this morning, with equities and the dollar sharply higher but Treasuries and gold lower.  The proximate cause for the swings came from FBI Director Comey, who indicated in a letter to Congress that the newly discovered emails would not change the bureau’s earlier decision not to pursue prosecution.  Although the story of the emails remains to be told (how did they get copied to a “house” computer and what was Anthony Weiner trying to accomplish?), apparently there isn’t anything new here.  This doesn’t mean investigations have ended for the Clintons.  There is some interest in the activities of the Clinton Foundation that will likely continue.  However, there isn’t going to be anything in the emails that will affect this election.

We still think this election is probably closer than the polling data or the betting numbers suggest.  We note that early voting among Hispanics was very strong in Florida; at the same time, African American early voting in a number of states, including Michigan, is reportedly soft.  The University of Iowa’s Electronic Markets have partially recovered from the earlier Comey announcement.

This chart shows the “winner take all” bet.  For example, the current bet on Sen. Clinton is just under 70 cents; if she wins, you would receive a dollar.  Last week, Clinton’s numbers plunged from 90 cents to around 55 cents, but have since recovered.

In the Senate, the same source is narrowly predicting a GOP House and Senate.

If this is the outcome, it would be a situation of gridlock, pretty much what we have now.

The market reaction to this news is rather striking.  Perhaps the most interesting is the dollar’s movement.  The dollar fell after the earlier Comey announcement, which struck us as a bit odd.  First, Trump wants to aggressively move against foreign trade, which would, if successful, lead to a smaller trade deficit.  The trade deficit (or, more accurately, the current account deficit) is the supply curve for dollars.  A narrower deficit shifts the supply curve toward the origin and, assuming a normally sloped demand curve, leads to dollar strength.  In addition, if Trump were to get a large fiscal spending package through, it would likely push up interest rates (this is what boosted the dollar in the Volcker years).  Thus, the dollar’s weakness appears to be due more to uncertainty rather than based on policy.

In other news, the FOMC appears to be on track for a December rate hike.  Current odds from the fed funds futures show a 76% likelihood.  Much was made over the rise in hourly earnings, which is up to 2.8%. 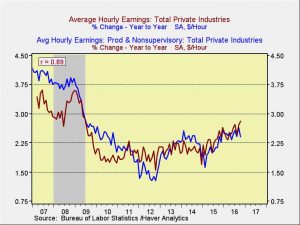 This chart shows the overall hourly earnings data with the hourly earnings growth for non-supervisory workers.  Although the two series are tightly correlated, it is worth noting that wage growth for the latter actually fell to 2.4% from 2.7% in September.  If wages for non-supervisory workers remain depressed, it would suggest the FOMC should move slowly because wage pressures are not all that strong.

Finally, OPEC is claiming a victory of sorts, with leaders indicating that the cartel has agreed to use outside sources to determine production levels.  Most nations prefer to use their own output numbers which they skew to their liking.  For example, when quotas are being set, they want to indicate they are producing more so they can claim a higher quota (or cut back less when production is being cut).  On the other hand, when output compliance is being questioned, they want to say they have lower output.  According to reports, cartel members have agreed, in principle, to use outside sources.  In practice, this could be difficult because there is often disagreement among various reporting groups.  Without using an average or some adjustment mechanism, it would not be surprising to see states use different sources to their advantage.  Thus, the news is progress but it is still unclear if the Saudis will cut without participation from Iraq and Iran.