[Posted: 9:30 AM EDT] It was a very quiet overnight session.  Media attention is focused on the midterms.  Here is what we are watching this morning:

Midterms: We have already discussed the election at length.  Here is our simple guide.  The consensus outcome is a Democratic House and a Republican Senate.  If this outcome is the result, market action shouldn’t be significant.  If the Democrats take both houses, we would expect a pullback in equities on fears that there will be a parade of investigations and perhaps an attempt to reverse the tax bill.  This fear is overblown.  We suspect the Democratic Party establishment is cool to impeachment and thus will try to quell the more aggressive tendencies of the party’s left-wing populists.  And, never forget, the president can veto bills.  If the GOP holds both houses, expect an initial equity rally on ideas that even more tax relief may be coming.  However, some of that bullishness will be tempered by fears of further trade impediments.  Our expectation is the consensus.

Although this year’s midterm pattern in equities hasn’t exactly followed the average pattern, it should still be noted that equities tend to have strong gains after the midterms.  Such seasonal studies should always be taken as guides; Ned Davis, a well-known market analyst, used to suggest that the pattern, and not level, was the important factor to watch. 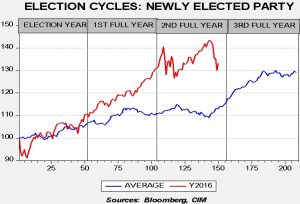 It’s notable that the real pattern break was last year, when the big rally in stocks was due to the passage of the tax bill.  The midterm year is usually rather flat.  Although we did make new highs, it has arguably been a sideways year.  If the pattern holds, we should see a strong market into the middle of next year.  Why does this pattern exist?  In general, there are two factors behind it.  First, the election fosters some degree of uncertainty and getting the results ends that uncertainty and supports sentiment.  Second, the incumbent president is interested in re-election and thus pushes for economic stimulus to avoid the worst political outcome, a recession into the election year.

Iran sanctions: Although eight nations have been granted waivers for buying Iranian crude oil, it’s not clear how they will pay for it.  S.W.I.F.T. has confirmed that it is severing ties with Iran’s banks.[1]  This will make it nearly impossible for the nations able to buy Iranian crude to easily pay for it.  European leaders are trying to create an alternative messaging network but are struggling to make progress.  One factor is that no nation is keen to house the network, fearing that nation will become a target for U.S. sanctions.[2]  It’s apparent that the EU won’t have a workaround in place as sanctions go into effect.

China and U.S. trade: There are growing hopes of a thaw developing between the U.S. and China over trade as the G-20 meeting looms on November 29.  The two parties are holding security talks which were previously delayed.[3]  American business leaders offered optimistic comments as well.[4]  Although we are not convinced that a major reduction in trade tensions is in the offing, some minor deals are possible.  The U.S./China issue is existential, the problem of a rising power threatening an established hegemon.[5]

Natural gas prices: Yesterday, natural gas prices rallied strongly as a significant cold front is expected to bring wintery weather to the central and eastern regions of the U.S.  Inventories are at their lowest levels since 2014 on a seasonally adjusted basis.  In that year, Henry Hub prices peaked at $6.55 per MMBTU. 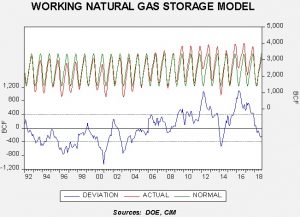 This chart shows natural gas inventories with a seasonal adjustment factor.  The lower line on the chart shows the deviation from normal.  The growth of shale oil produces natural gas as a by-product and that extra supply has tended to keep prices low.  This year, rising exports to Mexico and LNG processing has offset production, leading to the lower inventory situation.  A key factor in yesterday’s rally was the early cold snap.  In general, inventory managers want to keep storage for later in the winter; therefore, when faced with early cold weather the supply usually comes mostly from current production, which tends to boost the price.  Overall, early cold weather has a bigger impact on natural gas prices than later cold weather, depending on the storage situation.  The combination of early cold weather and low inventory levels is bullish for natural gas.