[Posted: 9:30 AM EDT] Good morning!  Risk markets are under pressure this morning after the president maintained a hard line on Chinese tariffs.  Here is what we are watching today:

Chinese tariffs: In an interview with the WSJ,[1] President Trump indicated that he expects to lift existing tariffs on $200 bn of Chinese imports to 25% from 10%, suggesting it is “highly unlikely” he would delay their implementation.  He also said that if talks with Chairman Xi don’t bear fruit, he would likely apply tariffs to the rest of China’s imports.  That would be another $267 bn in goods; it is not clear if the rate on the proposed new tariffs would be 10% or 25%.  One of the key points the president made offers an insight into his thinking—he had a message to companies wondering how to cope with tariffs.

“What I’d advise is for them to build factories in the United States and to make the product here,” Mr. Trump said in the interview. “And they have a lot of other alternatives.”[2]

President Trump’s vision for America is a pre-1978 version where the economy is deglobalized and most production is performed in the U.S. by highly paid American workers.  Although this would be better for U.S. labor it will (a) almost certainly contract profit margins, and (b) lead to higher inflation.  We have been warning our readers for some time that we are likely moving into an equality cycle and leaving an efficiency cycle.  That quote adds to evidence that this shift is underway.  The eventual outcome will likely be less inequality but higher inflation.

GM (36.75, +1.72): As a reminder, we don’t discuss individual companies in this report unless the news surrounding them have macro implications.  Yesterday, Mary Barra, the CEO of General Motors, announced sweeping plant closures and layoffs.[3]  In total, seven production plants will close and 14,000 workers will lose their jobs.  The layoffs represent 4.8% of the firm’s North American workforce.  The company is reacting to a weakening global auto sales market (China rescinded a tax break in January; the cut in 2016 led to a jump in car sales in that year but since then sales have been weak[4]) and excess capacity.  GM, much like Ford (F, 9.40, 0.27), is abandoning the sedan market to foreign nameplates and focusing on trucks and SUVs.  GM is also trying to divert revenue to future auto technology.

Extending the equality and efficiency theme, we note that both President Trump[5] and Senator Sherrod Brown (D-OH)[6] have criticized the move.  The juxtaposition of a GOP president and a hard-left Democrat senator holding the same position is notable.  To be fair, Ohio was a key state in the president’s capture of the Electoral College and plant closures in the state would likely trigger a response from its senators.  But, the real key is that we may be entering a world in which firms will be less able to freely allocate capital where costs are most favorable.  Again, we are not saying that company pursuit of profit is the highest value.  But, we think it does show that worries have diminished about triggering inflation by restricting supply.  We describe this process as “intergenerational forgetfulness.”  Simply put, it means that the memory of the 1970s inflation is steadily aging out and this memory is being replaced by low inflation and increasing concern about inequality. 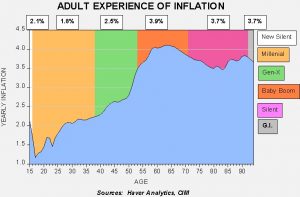 This chart shows the adult experience of inflation for Americans by age.  We start adulthood at 16 years old.  Although the thought of such an early start to adulthood is somewhat humorous in the present day, for the population at the right end of the chart adult responsibilities were taken on at a much earlier age.  Note that the baby boom has the highest lifetime experience of inflation, an average of 3.9%.  The aggressive anti-inflation policies that began in 1978 successfully lowered inflation, so successfully, in fact, that now a large contingent of Americans see no issue with inflation.  For adult Americans under the age of 50, the average inflation rate is 2.1%; older than 50, it is 3.7%.  Thus, it makes sense that there is less fear of causing inflation by undermining supply-favoring policies as there are simply fewer Americans that have experience of high inflation.

While we think we are early in this process, the direction appears rather clear.  However, that doesn’t mean that inflation is necessarily imminent.  A new study from the San Francisco FRB makes a strong case that the recent lift in core PCE was due to factors unrelated to the cyclical trends in the economy.  Instead, the article indicates that the recent rise was due to one-off events and core inflation is likely to fall below target as these factors wane.  This report would argue for a cautious approach to policy tightening.[7]

Trouble on the farm: Two items of note here.  The Minneapolis FRB reports[8] a rise in Chapter 12 bankruptcy filings.  This part of the bankruptcy code is mostly constructed for farmers and combines the corporate features of Chapter 11 with the filing simplicity of the household Chapter 13 structure.  The weakness in the farm belt is mostly due to weak commodity prices which is forcing consolidation.  Thus, smaller farms are facing trouble and being forced to either restructure or sell out.  The report notes an increase in non-performing agriculture loans in the Ninth Fed District.  The second item relates to soybeans.  It is no secret that China has retaliated against U.S. tariffs by applying tariffs to U.S. soybeans.  China is buying its supplies from other sources, mostly South America.  Although the logistics are not seamless, U.S. farmers have been picking up sales from former customers of South America who are now focusing on China.  At the same time, China has been experimenting with feed mixes for its hogs to use less protein, which would reduce demand altogether.  However, a new fear has emerged—African swine fever is apparently spreading through China’s hog herds.  The disease is usually fatal for hogs and the spread of the fever is starting to affect overall Chinese soybean imports.[9]  This news will add increased pressure on grain prices and add to farmer woes.

Update on the Kerch Strait: As we reported yesterday, Russia used a tanker to block a bridge arch on the Kerch Strait, a narrow waterway that links the Black Sea to the Sea of Azov.  Three Ukrainian naval vessels were attacked and taken by the Russians.  The Ukraine parliament declared a month of martial law.[10]  Although there is some concern that conditions could deteriorate, neither side likely wants an escalation.  The fact that this occurred just before the G-20 meeting may be an indication that both sides want to remind the world that the Ukraine situation has not been resolved.  But, we would not expect a hot war to emerge from this event.

A couple of housing charts: We are seeing a rise in household refinancing, with the majority of borrowers taking cash out of the transaction.[11] 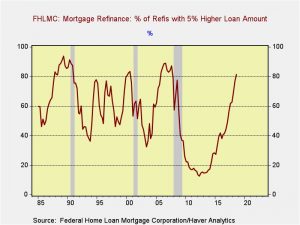 The above chart shows that 80% of new loans are for more than 5% of the previous loan amount; since the data began in 1985, a reading over 80% occurs about 18.5% of the time.  However, what is surprising is that these refinancing loans are clearly occurring with the express purpose of equity withdrawal as these borrowers are giving up lower mortgage rates. 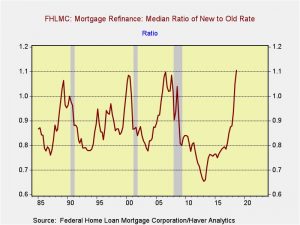 A ratio of one would indicate a swap at the same rate.  The current ratio is now the highest on record.  As the referenced WSJ article suggests, homeowners are returning to cash-out refinancing because they have not been able to generate enough income to pay down other debt or make other purchases.  As these charts show, however, activity at these levels has become problematic in the past.  This is an area we will continue to watch closely.