[Posted: 9:30 AM EDT] Happy Monday!  Risk markets are higher this morning on hopes of a détente between China and the U.S. on trade and on hopes that the FOMC will signal some dovishness.  Thanksgiving has passed and the West is gearing up for Christmas.  Here is what we are watching today:

Tensions at the Kerch Strait: Russia used a tanker to block a bridge arch on the Kerch Strait, a narrow waterway that links the Black Sea to the Sea of Azov.  Although both Ukraine and Russia technically share jurisdiction over the area, Russia, with control of Crimea, effectively holds power over the strait.  Both nations have disputes over territorial waters, making the region a potential hotbed for conflict.  According to reports, three Ukrainian naval vessels approached the bridge but were blocked by the tanker.  Later, Russian warplanes and coast guard vessels fired on the Ukrainian vessels and seized the three Ukrainian ships.[1]  Russia claims the Ukrainian ships illegally entered Russian waters after Russia had told the Ukrainian vessels that the strait was temporarily closed[2]; Ukraine obviously disputes this narrative.  NATO is backing Ukraine on this issue and the latter has asked for an emergency U.N.S.C. meeting.  Ukrainian President Poroshenko is asking parliament to impose martial law which would make it easier to mobilize.

The below map shows the strait.

Will tensions escalate from here?  Only if NATO (which means the U.S.) decides to make a strong response.  We don’t expect that to occur.  The White House is not likely to directly defend Ukraine over this skirmish and the Europeans don’t have enough power to do so.  What is worrisome about this incident is that it could be a probing tactic by Putin to gauge the West’s resolve.  If he can get away with this, he may try a similar tactic with the Baltics at some point.  For now, financial markets, with the exception of Russian financial assets, are mostly ignoring this event.  But, it could make the G-20 meeting later this week a bit more interesting.[3]

Italy relents?  Italy’s governing coalition is hinting it may reduce its deficit target to avoid a confrontation with the EU commission.[4]  Although we have our doubts that the deficit will actually be reduced, there is the potential for enough “window dressing” to allow the official numbers to improve and, at least for now, ease tensions between the EU and Italy.  Financial markets rallied on the news.

Macron’s woes: French President Macron is facing continued widespread protests over his government’s decision to raise fuel taxes.  The policy was designed for environmental reasons but car owners in France are not happy with the decision.  Although the numbers are down from last week, the persistence of the protests are somewhat unusual.  This weekend’s action was mostly in Paris, which is also a departure from last week, when they were more widespread.[5]  Our take on the protests is that the participants are mostly working class and the concern is primarily financial.  The West is facing widespread populism, a revolt of the bottom 90% against globalization and deregulation.  Macron’s political movement was, in some regards, part of this reaction.  He built a party from scratch, defeated the established center-left and center-right and prevented a populist surge from either the left or right.  However, winning elections is one thing, governing is another.  He is trying to govern as a center-right supporter of free markets when the bottom 90% want to be protected from the forces of globalization and deregulation.  The administration’s response to the protests has been to mostly berate or ignore them.  That may prove to be a mistake.

Brexit update: The EU approved the Brexit deal.[6]  Now, PM May faces the difficult task of moving a reluctant parliament to accept the arrangement.[7]  She has a couple of weeks to cobble together a coalition of Conservatives and Labour to pass the measure.  Although there is little enthusiasm for the deal, it isn’t obvious that a better deal can be arranged.  We would not be shocked to see the first vote fail, which could lead to another try—an outcome we refer to as the “TARP method.”  The first TARP vote failed but market reaction concentrated the minds of legislators to pass the measure.  If this deal fails, the next step would be May’s resignation followed by either hard Brexit (leaving without a deal, likely causing significant economic disruption) or another referendum.  We are leaning toward the second referendum outcome, but we do think the odds that the current form passes may be higher than most think.  Although a hard Brexit is still a possibility, it is probably the least likely outcome.

Taiwan swings toward China: In local elections over the weekend, the China-leaning KMT party won going away, rejecting the separatist Democratic Progressive Party (DPP).[8]  Taiwan President Tsai Ing-wen resigned from DPP party leadership following the drubbing.  Presidential elections are coming in a year and these local elections raise the possibility that the island will return to KMT rule.  In general, the DPP tends to find support among local Taiwanese who would prefer independence, whereas the KMT finds support among the Chinese Nationalists whose ancestors fled the mainland after Mao won the civil war in 1949.  Power tends to swing between the two parties.  Neither has been able to maintain power but the KMT’s recent performance does ease some of the potential tensions that have been rising under President Tsai.

Trump and the Fed: Financial markets have been hinting that the FOMC should be considering at least a pause to prevent further weakness in the financial markets.  Chair Powell will be giving a speech Wednesday evening on Fed policy and emerging markets and there is hope of a dovish tone.  Meanwhile, the WSJ[9] reports that the president is unhappy with Powell and is blaming Treasury Secretary Mnuchin.  As we stated numerous times after the election, there was a battle going on between the GOP establishment and the populists.  That battle is still underway; Mnuchin, along with Kudlow, represent the former.  To some extent, the president has been balancing these two forces.  His stump speeches are pure populist but his governing is mixed.  The tax cuts and deregulation generally favor the establishment, whereas the immigration and trade policy are populist.  One issue we have been watching since Trump’s election is relations with the Fed.  Presidents since Truman have, at times, been at odds with the central bank.  It is powerful, independent and can wreck a president’s political position by bring a recession.  Trump is not unique but appears so because since the early 1990s there has been a détente between the two forces—presidents leave the Fed alone and the Fed promises to be careful.

Our concern has been that President Trump might take a page out of President Nixon’s playbook and force the Fed to deliver easy policy.  He has already undermined the truce via tweet.  Nixon got his way with the Fed by creating a crisis for Chair Arthur Burns (his administration leaked that Burns wanted a doubling of his pay) and then offered to support Burns in return for easy policy.  We thought we would get something similar with Trump picking easy money governors but instead the president, mostly under Mnuchin’s guidance, delivered center-right establishment picks for governors.  It appears the president has finally figured out he didn’t get what he wanted and is turning on his treasury secretary.  If the president can browbeat the Fed into delivering easy policy and this causes financial markets to worry that the Fed won’t stand up to inflation threats, then it could unanchor inflation expectations and lead to a much weaker dollar and higher bond yields.

Oil: Oil prices have taken a beating over the past few weeks; rising inventories are the primary culprit, although a steady series of presidential tweets are playing a role as well.  There seems to be a notion floating around that the Saudi crown prince, now indebted to the White House for not pressing the Khashoggi incident, will be beholden to Washington.  Recent production numbers from the kingdom support this idea.[10]  Perhaps…but, at the same time, there isn’t anything coming out of the Kingdom of Saudi Arabia (KSA) to suggest it wants prices to continue to fall.  At the same time, continued declines in oil prices do appear to be President Trump’s goal.

Does this make sense?  There is evidence to suggest that lower gasoline prices lift consumer confidence.  But, it isn’t the most important factor.

The above chart on the left shows consumer confidence and the unemployment rate (the latter with an inverted scale).  The two series track each other closely and correlate at the -75% level.  To measure the impact of gasoline prices, we scale gasoline prices by the hourly wages of nonsupervisory workers.  This gives us a measure of how many gallons of gasoline a worker can purchase for an hour’s worth of work.  The recent decline in gasoline prices has lifted the number to 8.3 gallons; however, this measure has been falling since 2016 and has not prevented consumer confidence from continuing to rise.  The evidence suggests falling unemployment plays a bigger role.

At the same time, oil and gas drilling has become more important to the U.S. economy. 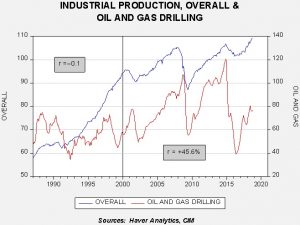 This chart shows the relationship between overall industrial production compared with industrial production from oil and gas drilling.  From 1987 to 2000, the correlation was nil, suggesting that the impact of oil and gas drilling was minimal for overall output.  However, since 2000, the correlation has risen to +45.6%.  This suggests that if oil prices remain low, oil and gas production will likely decline and weaken the overall economy.  In general, the impact on the U.S. economy from lower oil prices is probably still positive, on balance, but the positive benefits are less than they used to be.

Finally, oil prices have fallen to a level where they are undervalued. 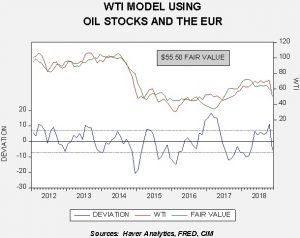 Our EUR and oil inventory model suggests fair value of $55.50 and is nearly a standard error below fair value.  In the past, such valuation usually leads to at least consolidation.  Seasonally, we should see inventories decline into year’s end and these fundamental factors, coupled with a deeply oversold market, should lead to a bounce in crude oil in the near term.