[Posted: 9:30 AM EST] Equities continue to move higher in the post-election environment.  This rise is coming in the face of virtual certainty that the FOMC will raise rates next month.  We may be starting to see a shift in market sentiment away from the focus on monetary policy toward economic growth. 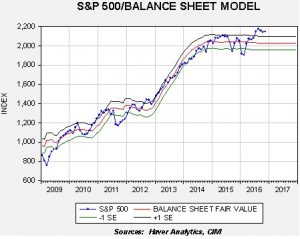 This chart shows a model of the S&P 500 using the Fed’s balance sheet as the independent variable.  Since 2009, the relationship has been quite close; the mostly sideways market seen since 2014 is consistent with tapering.  However, since the middle of the year, we have seen equities persistently exceed the upper band of the model.  Either equities are overvalued (fair value based on this model is 2029) or the relationship is starting to break down.  We are leaning toward the latter.  Both presidential candidates were calling for fiscal expansion with Trump’s admittedly vague promises expected to be larger than Clinton’s.  If we are shifting toward economic growth and away from policy, it means the FOMC may be able to raise rates and have less impact on equities than the past few years would have suggested.  On the other hand, equities may become more sensitive to economic growth and if there are delays in fiscal expansion or we fail to see growth pick up, equities could be vulnerable to weakness.  In the near term, however, hopes are high that Trump and a GOP Congress will be able to move on policy changes.

We do note that President-elect Trump gave a statement yesterday in which he indicated the U.S. would formally remove itself from the TPP group.  Japanese PM Abe indicated that TPP is “meaningless” without the U.S.  We would agree.

Meanwhile, optimism surrounding OPEC remains elevated.  Nigeria was the most recent cartel nation to comment on the proximity of a deal.  However, in the past hour, oil prices have begun to slide.  We have probably reached a price point that OPEC must now deliver.  If they fail to negotiate a credible deal, oil prices will be vulnerable to a sharp decline.  Given the EUR/WTI relationship since 2012, a 1.06 €/$ exchange rate translates into a WTI price of $35.80.