[Posted: 9:30 AM EST] Episode #3 of our Confluence of Ideas podcast is now available.

Financial markets this morning can best be described as “becalmed.”  Not much is moving   We cover the Fed minutes and the recent gyrations with trade.  OECD downgrades 2020 growth.  Yesterday’s energy data is recapped.  Here are the details.

Fed minutes:  The minutes had no discernible impact on financial markets.  Here are the general takeaways from the report:

So, overall, probably not more rate cuts this year, but the odds of a hike are very low.

Trade:  Reports surfaced yesterday that the trade talks could go into next year.  This sent equities lower although the major indices did recover from the worst levels of the session.  If it turns out the trade deal isn’t going to happen, what will be the outcome for equities?

Here is a technical assessment of the potential decline:

This is the S&P 500 from the summer of 2017.  With a couple of violations, the index has moved in a broad upsloping channel since the initial peak after the tax cut passed.  Clearly, last year there was a serious violation of the channel; another one occurred recently.  If the trade talks are doomed, a pullback to the September lows is likely, or a bit more than 10% from the recent high.  Falling to the lower line of the channel would put the index around 2800.  That’s probably a reasonable set of parameters for the market over this issue.

Here are the most recent developments on trade.  There is breaking news that the U.S. may not implement tariffs scheduled for Dec. 15th if the Phase I talks fail.  The White House has not confirmed this report.  This decision, if true, would suggest that the White House realizes that adding tariffs to all Chinese imports will affect consumer goods and may be rather unpopular.  If so, this might mean that the last leg of tariffs may never be implemented and thus tariffs have become a less potent threat.  China has invited the U.S. negotiating team to Beijing for new talks; the U.S. is reluctant to go without clear evidence China is willing to meet U.S. demands.  President Trump has blamed China for the lack of progress on trade.  China is promoting continued talks.  In a warning, former Secretary of State Kissinger warned that if the U.S./China trade conflict isn’t brought under control, the potential exists for it to spiral into a scenario similar to WWI; we would agree with this assessment.

On Dec. 10th, the WTO appeals courts will stop functioning due to the lack of judges.  The U.S. has prevented new appointments, effectively ending the WTO’s ability to resolve trade disputes.  If the WTO collapses, it will likely mark the end of the post-WWII (but especially the post-Cold War variant) globalization.

Hong Kong:  The House has passed the Senate’s Hong Kong bill;  given the overwhelming support in Congress, the president is expected to sign the bill and then deal with the fallout from China.  China is warning that this measure will weaken relations.  About 100 protestors remain holed up at the Hong Kong Polytechnical University.  Although there has been speculation that Hong Kong could evolve into another Tiananmen-style outcome, what we are seeing instead is a steady militarization of the Hong Kong police and a rising escalation of violence on both sides.  It appears Beijing is content to allow the local authorities to do what is necessary to quell the violence, but the PRC does not want to use the PLA to secure the city.  This doesn’t mean that eventually the military doesn’t move in but there is clear reluctance to do so.

Global growth:  The OECD is warning that the world is heading toward a low growth rut due to trade disputes and low investment rates.  It is projecting 2.9% GDP growth for the world in 2020; any level under 3% is generally considered a recession. 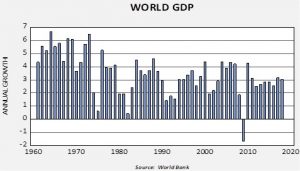 United Kingdom:  The Labor Party released its most radical policy program in a generation, including massive nationalizations, higher taxes on businesses, huge borrowing for public investment, and increased spending on public health and other social services.  The lurch to the left has soured many Britons on the party ahead of the December election, but the policies may even be too much for the workers the Labor Party embraces.  Union leaders and some Labor insiders have reportedly pushed back internally against a proposed windfall profits tax on oil companies operating in the North Sea, fearing the tax would cost union jobs.

Japan:  Prime Minister Abe’s push to amend the country’s pacifist constitution to allow a stronger military hit a roadblock, as parliament members agreed to cancel a discussion of a required change in Japan’s referendum law.  With only two weeks left in the parliamentary session, the move basically prevents any movement on the issue for the rest of the year.

Canada:  Prime Minister Trudeau has announced a significant shake-up to his cabinet.  Most important, Foreign Affairs Minister Chrystia Freeland, who led the country’s negotiating team during the recent U.S.-Mexico-Canada trade deal, has been elevated to the role of deputy prime minister in charge of provincial and territorial affairs.  That could help Trudeau overcome the nascent separatist sentiment in Alberta and Saskatchewan that has developed in response to his national carbon tax and other environmentalist policies.  By developing Freeland’s expertise in domestic issues, it should also help set her up for a run at the prime minister’s role in the future.

Colombia:  While political protests have burgeoned in Chile, Bolivia, and Ecuador, and as political and economic problems have intensified in Venezuela, Brazil, and Argentina, it seemed Colombia was a bastion of stability.  Today, however, unions and anti-government protestors have launched a massive national strike to protest some of the same issues that have caused unrest elsewhere in South America, i.e., corruption, inequality, and political rigidity.  The spread of the unrest to Colombia, and the potential for a violent government response will be negative for South American assets going forward.

In the details, U.S. crude oil production is unchanged at 12.8 mbpd.  Exports rose 0.4 mbpd while imports rose 0.2 mbpd.  The rise in stockpiles was mostly in line with expectations.

This chart shows the annual seasonal pattern for crude oil inventories.  We are approaching the end of the autumn build season, which implies we will see a modest drop during the month of December before the usual seasonal rise in Q1.

We continue to monitor the autumn refinery maintenance season.

This week’s rise is normal, but utilization remains below average.  Run rates should continue to rise into the new year.

Based on our oil inventory/price model, fair value is $56.79; using the euro/price model, fair value is $49.14.  The combined model, a broader analysis of the oil price, generates a fair value of $51.12.   We are seeing the divergence between dollar and oil inventories narrow as the dollar weakens and oil stocks rise.  We expect the Saudi IPO process to support oil and any positive news on the trade front would be supportive for oil prices as well.