[Posted: 9:30 AM EDT] The overnight news was relatively light, but here are the events we’re keeping an eye on today:

Changes at the Fed: Yesterday, the FOMC decided to maintain interest rates at their current levels but hinted at a possible rate increase in December.  The Federal Reserve cited strong economic growth as the reason for further monetary tightening.  Currently, the upper bound fed funds rate is 1.25%, which is relatively low compared to the neutral rate of 3.0%.  As a result, we expect rate increases to continue into 2018.

In other Fed news, President Trump is expected to nominate Jerome Powell, a Federal Reserve governor, for the Federal Reserve chairman position.  If confirmed, Powell would be replacing Janet Yellen after her term ends in February.  He is not expected to have a tough time getting confirmed in the Senate as he has a good relationship with Republicans and Democrats alike.  In 2011, Powell made a name for himself for his contribution in brokering a deal between the Obama administration and Congressional Republicans to raise the debt ceiling.  Trump’s selection of Powell would be considered a relatively safe choice as Powell has close ties with the Republican establishment.  Powell’s colleagues describe him as being neither dovish nor hawkish, but moderate.  That being said, there are some Senate Republicans, including Vice President Mike Pence, who would prefer that President Trump select John Taylor, who is known to be hawkish.  Accordingly, it is widely believed that he would maintain Yellen’s approach of gradual interest rate rises.

Updates on tax reform: The tax reform package is expected to be revealed later today.  Reports suggest that the House is struggling to come up with legislation that is palatable to all factions of the GOP and the White House.  Recent attempts at proposal changes to make the bill more appealing have been complicated by the president’s doggedness over key reforms.  Trump has tweeted his disapproval of a possible phase-in period for corporate tax cuts, increased taxes on 401(k)s and retention of the Obamacare individual mandate.  There are fears that Congress might replicate the failure of their Obamacare repeal if they insist on meeting all of Trumps demands.  That being said, there have been a few concessions made as of late—it is believed the corporate tax rate will likely be temporary, the top individual tax rate will remain unchanged and mortgage rate deductions will be capped at $500,000.  As of right now, we are not confident that tax reform will be complete before the end of the year.  We will continue to monitor this situation.

Rate hikes in the U.K.: Today, in a 7-2 vote, the Bank of England decided to raise its benchmark interest rate for the first time in a decade, while still maintaining its asset-buying program.  The move is likely in response to elevated levels of inflation.  Core CPI is 2.5%, which is higher than the 2.0% target set by the central bank.  In addition, the BOE has signaled that it will likely raise interest rates two times before the year 2020.  Even though the rate rise was expected, BOE policymakers have expressed concern as to the effect it might have on GDP, which has been relatively weak compared to some of its European peers.

This chart shows current crude oil inventories, both over the long term and the last decade.  We have added the estimated level of lease stocks to maintain the consistency of the data.  As the chart shows, inventories remain historically high but have been declining.  In fact, inventories are now at their lowest level since mid-2015.  We also note that the SPR fell 0.8 mb, meaning total oil supplies fell 3.2 mb. 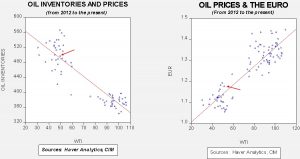 Based on inventories alone, oil prices are overvalued with the fair value price of $54.23.  Meanwhile, the EUR/WTI model generates a fair value of $62.89.  Together (which is a more sound methodology), fair value is $59.60, meaning that current prices are below fair value.  Recent oil price strength has narrowed the degree of undervaluation.