Good morning and happy World Philosophy Day!  The winter surge in the pandemic is weighing on risk markets this morning.  We update the progress of the Eurobond; delays have cropped up.  We also update the EU’s stance on tech firms.  There is a lot of news on China, including rising tensions with Australia. We update the pandemic news.  Brexit is coming to its deadline, and a deal remains elusive. We are seeing South Korean interest in U.S. real estate.  Mexico and the U.S. come to an agreement on the arrest of the former defense minister.  We close with economic odds and ends.  And, being Thursday, the Weekly Energy Update is available.  The next report will be published on December 3.  Here are the details:

EU:  The proposed Eurobond has hit a snag; Poland and Hungary oppose the program’s requirement for following the “rule of law” to receive funds.  The EU has been critical of both countries for their actions to undermine the independence of the judiciary, and both nations fear they will be shut out of funds from the EU budget.  Thus, they are using their veto to stop the budget from passing.  Our position is that the issuance of a Eurobond will be bullish for the EUR; if the budget fails, we will have to reconsider our position.  We still believe that a deal will eventually be struck.  But, the requirement of unanimity remains a stumbling block for Europe to act decisively.  We do note that the actions Poland and Hungary have taken are unpopular within the EU, so making a deal could be difficult.

China:  Here are the highlights on China.

COVID-19:  The number of reported cases is 56,394,215 with 1,352,188 fatalities.  In the U.S., there are 11,531,451 confirmed cases with 250,548 deaths.  For illustration purposes, the FT has created an interactive chart that allows one to compare cases across nations using similar scaling metrics.  The FT has also issued an economic tracker that looks across countries with high frequency data on various factors.  The map below shows infection rates by county.  What is striking is that the coasts are seeing much lower infection rates, which may reflect growing natural immunity.  The coasts suffered the brunt of the virus in the spring; now, the interior is facing rising infections. 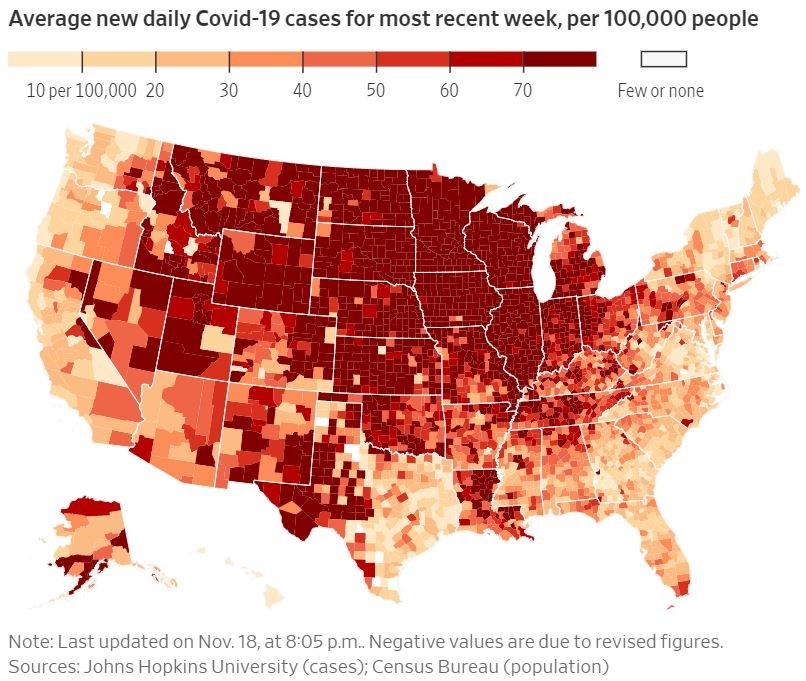 Brexit:  As EU leaders meet today, there will be no briefing on Brexit because of the lack of progress.  Although we still expect a deal to be made, there is evidence that the EU stance is hardening, which may restrict the ability of negotiators to reach an agreement.  The GBP has weakened on these reports.  Meanwhile, U.K. industry is warning that, even with an agreement, it will need six months to prepare border checks.

Real estate:  South Korean investors have been flocking to U.S. commercial real estate this year.  The combination of dollar-low interest rates and hedging costs has encouraged South Korean institutions to increase their exposure to the U.S. real estate market.  These flows act to partially offset the loss of Chinese real estate investment.

Mexico:  In mid-October, the U.S. arrested Salvador Cienfuegos, Mexico’s former defense minister, on charges he was working with drug cartels.  At the time, the arrest was controversial; it’s not that the charges were not necessarily true, but the diplomatic damage it incurred was significant.  After further consideration, the DOJ decided to drop the charges against Cienfuegos.  It isn’t clear whether this decision will reverse the damage to relations with Mexico.

Economic odds and ends:  Here are a couple of items worth noting.

For the first time since 2013, S.W.I.F.T. reports that the EUR was the most used currency for global payments in October.  However, the dollar remains the dominant reserve currency, used in 85% of all forex transactions and 61% of foreign reserves.