Happy Monday!  It’s a short week as the U.S. prepares for the Thanksgiving holiday on Thursday and a slow day on Friday.  Here is what we are watching today:

BREAKING: Nissan (NSANY, 17.95) Chairman Carlos Ghosn has been fired by the company and arrested by Japanese authorities on charges of income misconduct.[1]

Pence v. Xi: VP Pence and Chairman Xi gave dueling speeches at the APEC summit over the weekend, with the U.S. and China offering differing views of each nation’s trade position.  Pence, in his speech, detailed a hardened U.S. trade position[2] and suggested that China’s broader policies, including the “one belt, one road” initiative, was creating debt traps for Asian nations.  It should be noted that last week President Trump deemed China’s recent offers on trade to be “unacceptable.”[3]  Later, Xi defended his nation’s trade and foreign investment policies and criticized the U.S. for its recent turn on tariffs.[4]  For the first time ever, APEC did not issue a joint closing statement, a clear indication of the growing dispute between the U.S. and China.[5]   These sharpened positions tend to weaken the case that the U.S. and China will come up with a deal at the G-20.[6]

At the same time, it isn’t exactly clear whether Pence is actually expressing policy or taking on the “bad cop” role.  Last Friday, President Trump signaled a more conciliatory stance which led to a bounce in equities.  That position appeared to be undermined by Pence’s speech.  However, we doubt the president would allow his VP to go independent on policy.  We note that Pence played a similar role with North Korea, setting a hardline stance at the Winter Olympics that was reversed by President Trump meeting with Kim Jong-un a few months later.  Pence’s speech and the apparent failure at APEC may simply be a bargaining position.

In addition, there was one rather interesting note that came from a former trade negotiator, Long Yongtu, who criticized the Xi administration’s decision to target soybeans, describing the action as “unwise.”[7]  Long led China’s negotiating team when it joined the WTO.  It is very unusual for former officials to criticize current government policy and may signal growing unease with Xi’s confrontational strategy with the U.S.  Although Xi does appear to be clearly in power, this move by Long bears watching.

Macron’s woes:[8]  French President Macron is facing widespread protests over his government’s decision to raise fuel taxes.[9]  The policy is designed for environmental reasons but car owners in France are not happy with the decision.  There has been at least one fatality and over 400 injured.[10]  At least 2,000 separate demonstrations have occurred in France over the weekend.[11]  Although we doubt they will bring down the government, it does show how Macron is struggling to govern in the face of growing unpopularity.  Although Macron’s issues pale in comparison to those in Germany, Ireland, the U.K. and Italy, these events show the fragility of European politics.

Tech under fire: The technology sector has always had close ties to the Democratic Party.[12]  The GOP was never all that comfortable with the tech ethos.  However, both sides of the political spectrum are turning on tech.[13]  Recent polls show a growing and broad dissatisfaction with social media.[14]  We see this as important because one of the keys to steady disinflation has been the lack of regulation on technological innovation.

Is USMCA in trouble?  There are reports that the incoming Democrats want major changes to the recently negotiated new NAFTA agreement.[15]  It is doubtful that the treaty can be changed significantly without blowing up the arrangement.  We suspect the administration will move to a “take it or I’ll end it” stance; at that, we expect the Democrats to back down but we may see some market worries before the deal is eventually accepted.

Brexit update: PM May is on her way to Europe[16] to continue negotiations with EU officials.  However, we don’t expect any major changes, although Michel Barnier, the chief EU Brexit negotiator, indicated over the weekend that the transition could be extended to 2022 to ease pressure on businesses.[17]  Such an agreement would avoid the “backstop” measures on the Ireland/Northern Ireland frontier.  The hard Brexit group will see this extension as a way to stay in the EU indefinitely and thus will likely oppose the offer.  Spain is using the Brexit controversy to try to increase its control over the British colony of Gibraltar.[18]  One trend we are watching—the odds of a second referendum appear to be rising.  Another vote might make sense given the magnitude of leaving the EU, the uncertainty over what exactly voters approved at the first referendum and the inability of Parliament to make a clear decision on Brexit.[19]  We do note that there are increasing fears surrounding a hard Brexit.  For example, there are reports that food warehouses are running out of space as retailers engage in “just in case” inventory stocking.[20]

Unsubstantiated rumors suggest there have been 40 leadership challenge letters submitted, eight short of enough to trigger a leadership vote among the Tories.  While this group contends they can still do away with May without 48 letters, the inability to hit the number suggests this group may not have as much support as it looks.  Even though the U.K. PM remains in grave political danger, she continues to hold onto power.[21]

Fed waffling?  There is a growing sense in the financial markets that the FOMC may not make three hikes next year.  Recent comments from Vice Chair Clarida seem to suggest that the economy may need as little as two more hikes or maybe as much as six to achieve neutrality.[22]  Since 1987, when then-Chair Greenspan indicated that the Fed stood ready to supply liquidity to financial firms during the 1987 Crash, financial markets have essentially found that policy authorities generally come to their aid.  Part of this action is because the U.S. shifted from a safe but inefficient financial system that was constrained by regulation to one that is efficient but fragile with much less regulation.  What does concern us is that the FOMC appears to be abandoning the Phillips Curve framework (which is justifiable) without an obvious new framework, which may increase the odds of a policy mistake.

Saudis lead the cutback charge: The Kingdom of Saudi Arabia (KSA) feels like it was wrong-footed by the Trump administration, which pressed on the nation to boost output to offset Iranian oil sanctions only to see the U.S. grant extensive waivers.  In response, the KSA is leading the charge within OPEC to cut production by up to 1.4 mbpd.[23]  Recently, the KSA has increased its oil exports to the U.S., likely in a bid to lower WTI prices. 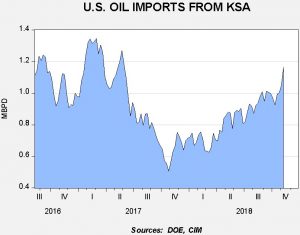 Note that since Q1, Saudi imports to the U.S. (on a four-week average basis) have been rising sharply.  According to reports, the Saudis are retaliating to the perceived “fake-out” by the administration and are planning to slash shipments to the U.S.[24]  Although oil prices have been under pressure in recent weeks, these actions by the KSA should, at a minimum, lead to market consolidation.  If the usual seasonal demand increase follows, we would expect prices to mount at least a modest recovery.