[Posted: 9:30 AM EST] It was another quiet night with lots of political speculation and some news.  Gen. Michael Flynn was apparently offered National Security Advisor, and Sen. Jeff Session has been offered Attorney General, according to the AP.  Meanwhile, in the markets, we are seeing some moderation in recent trends, which looks more like position-squaring in front of the weekend.

Reports from the OPEC meeting are mixed.  On the one hand, all the comments from the meetings seemed quite optimistic.  However, there is a noticeable lack of substance coming from the meetings.  Iran and Iraq both want a deal as long as they can produce as much as they want.  Nigeria and Libya want exceptions due to persistent unrest in these countries.  Russia wants a deal as well, but has indicated its contribution will be to freeze production levels at current record levels.  As is usually the case, OPEC will put together a deal if the Saudis are willing to shoulder most of the burden of market share loss.  For the most part, the Kingdom does not want the swing producer role.  The unknown here is whether financial conditions have deteriorated enough for the Saudis to accept the market share loss for higher prices, knowing full well that American shale producers, bolstered by a Trump presidency, will likely keep raising production on the back of higher prices.  Our expectation is that we get a widely trumpeted agreement with little substance.  If so, expect some market disappointment in oil, but probably not a drop much more than $40.  However, we are growing more concerned about the dollar’s strength, which, thus far, has not weakened oil as much as we would normally expect.  To some extent, the dollar rally is putting more pressure on OPEC to make a substantive deal.

With the release of CPI data, we can update our versions of the Mankiw rule model.  This model attempts to determine the neutral rate for fed funds, which is a rate that is neither accommodative nor stimulative.  Mankiw’s model is a variation of the Taylor Rule.  The latter measures the neutral rate by core CPI and the difference between GDP and potential GDP, which is an estimate of slack in the economy.  Potential GDP cannot be directly observed, only estimated.  To overcome this problem with potential GDP, Mankiw used the unemployment rate as a proxy for economic slack.  We have created four versions of the rule, one that follows the original construction by using the unemployment rate as a measure of slack, a second that uses the employment/population ratio, a third using involuntary part-time workers as a percentage of the total labor force and a fourth using yearly wage growth for non-supervisory workers. 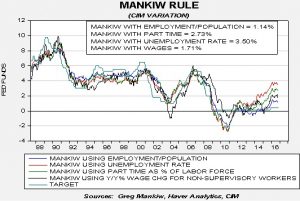