[Posted: 9:30 AM EST] In terms of market and economic news, it was a fairly quiet night.  Chair Yellen gave testimony before the Joint Economic Committee of Congress.  The prepared remarks were, for the most part, unremarkable.  There was no mention of the new president which, for Yellen, is probably prudent.  Until policies are actually enacted, there is no point in joining the speculation.

Meanwhile, speculation abounds about Trump’s cabinet and what will actually occur with stimulus and such.  The WSJ suggests that Trump may be leaning toward an infrastructure bank, which would probably have less impact than direct spending.  However, it is worth remembering that Trump appears to be a more “shoot from the hip” sort of manager.  He probably hasn’t completely made up his mind.  What appears to be going on now is an attempt by the populists among his advisors and friends to make major changes that were popular with the working class voters (trade impediments, immigration reform, major infrastructure spending), whereas the establishment center-right is trying to focus Trump’s precious political capital on tax reform and deregulation.  We suspect Trump will continue to allow the two sides to fight each other before making a decision on where he leans.  Thus, the current lack of clarity will likely be with us for another week or so.

The BOJ proved its mettle overnight; last month, the bank indicated it was changing its policy.  Instead of targeting a steady expansion of its balance sheet, it indicated instead that it would simply target the 10-year JGB at 0% and buy all the bonds necessary if yields rise above that level.  It worked like it was designed today; as the 10-year approached zero, the BOJ indicated it was in the market.  Yields promptly eased.  This program probably makes more sense and would become quite powerful if coupled with fiscal spending.

A cautionary tale is emerging from Europe.  Since the end of WWII, the U.S. has effectively demilitarized Europe.  After being the source of two world wars, the U.S. decided that the only way to ensure the continent wouldn’t do so again was to take over its security.  European militaries have, to a greater or lesser extent, atrophied over the years.  The further removed we are in time from this decision, the more current leaders have forgotten why this policy was implemented in the first place.  All that is seen now are the costs; the benefits of not fighting a land war in Europe (or, God forbid, a nuclear one) are mostly forgotten.  President-elect Trump has indicated he considers NATO questionable and thinks Europe should be responsible for its own defense.  Roderich Kiesewetter, a foreign policy spokesman for Merkel’s conservative coalition, suggested today that Europe may need its own nuclear deterrent if the U.S. is no longer willing to protect it through NATO.  If Europe remilitarizes, it would reduce some of America’s military burdens, but the cost would be that we may not be able to control European defense policy.  Although it seems inconceivable that Europe could behave in a belligerent manner, given the Cold War history, the first half of the 20th century offers a stark lesson as to what Europe is capable of.

This chart shows current crude oil inventories, both over the long term and the last decade.  We have added the estimated level of lease stocks to maintain the consistency of the data.  As the chart below shows, seasonally, we should see inventories tend to stabilize into the end of November and decline into year’s end.  This week’s rise worked against that seasonal pattern and suggests we are seeing importers catch up from this summer’s tropical storm disruptions. 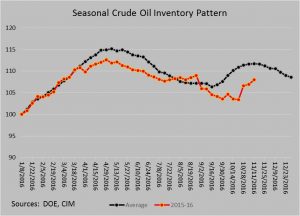 Based on inventories alone, oil prices are overvalued with the fair value price of $37.97.  Meanwhile, the EUR/WTI model generates a fair value of $43.10.  Together (which is a more sound methodology), fair value is $39.53, meaning that current prices are above fair value.  The divergence from fair value is due to hopes of an OPEC deal that would boost prices.  Saudi Arabian officials indicated today they are hopeful a deal will be done, which lifted prices this morning.  However, the current strengthening dollar and rising inventories make it clear that OPEC really needs to make credible cuts at the Nov. 30th meeting.  If it fails, oil prices could fall into the high $30s.