Happy Friday!  After a strong close in equities yesterday, we are giving some of the gains back this morning.  Trade worries continue to dominate.  This is what we are watching this morning:

Brexit: After yesterday’s high drama, things are remarkably calm this morning.  Hard Brexit Tories submitted no-confidence letters, the first step to trigger a leadership challenge to PM May.  So far, their efforts are falling well short of what is required; a total of 48 formal letters are needed to bring a leadership challenge but the group only has 20 and can’t seem to generate further interest.  After a flurry of cabinet resignations, the rest of May’s cabinet seems to be sticking.  PM May’s political obituary has been written dozens of times in recent months,[1] but she remains standing and, due to her ability to maintain composure and press on, she continues to survive.  Of course, part of her success is due to the fact that there isn’t an obvious replacement.  The hard Brexit group is a set of difficult personalities that don’t seem to like each other much and all assume they are the natural leader of the group.  Although they are loud and get lots of press coverage, they don’t seem to be all that powerful.  Another factor helping May is that it isn’t clear if a better deal is possible.  As we have noted over the past two days, Britain’s bargaining position is weak and the prospect of sending the economy into a deep recession, even if it is short in duration, isn’t an attractive position.

Still, there is no doubt that May doesn’t have the votes from her coalition to pass this measure.  She has been calling for a “free vote”[2] in Parliament.  Corbyn, hoping to bring down the government and become the next PM, won’t likely agree.  But, he may not be able to discipline his backbenchers who may vote with May on the measure.

What happens if the vote fails?[3]  There are five possible outcomes:

In the end, we think the U.K. will avoid a hard Brexit and maintain ties to the EU.  It should be noted that there is widespread dissatisfaction with the EU across Europe and, at some point, we would not be shocked to see other nations expand their sovereignty at the expense of the broader union.  But, a hard Brexit would almost certainly lead to an immediate negative outcome that all involved would likely try to avoid.

Trade truce: Equities rallied yesterday on hopes of a trade truce with China.[4]  Although we could see some sort of delay in tariff implementation, the anti-globalists within the administration do continue to have influence.[5]  We would not be surprised to see the president try to calm concerns over trade at the G-20, but we would not expect a major reversal.[6]  The WSJ has a good article about how President Trump’s views on trade have developed from his early years; his perception of trade as a “zero-sum” game are deep-rooted and we would not expect him to ever fully abandon them.[7]

Port facilities are reporting a surge in imports,[8] suggesting that firms are trying to beat the onset of tariffs by building critical inventories.  The chart below shows the contribution to GDP from goods imports and inventories.  Rising imports are a negative number in this calculation.  Note that in Q3 there was a surge in imports and a sharp rise in inventories.  We would expect a negative impact from inventory destocking, likely showing up in Q1 2019 GDP, but that would be partly offset by lower import numbers. 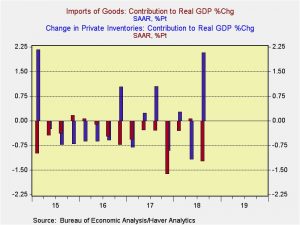 Gulen extradited?  NBC is reporting that the White House is considering extraditing Fethullah Gulen to Turkey in a bid to placate Turkish President Erdogan and get him to stop pressing on MbS and the Saudis.[9]  This would be a significant move if the U.S. follows through, although it should be noted that career officials at the DOJ oppose the move.  Giving up Gulen would be significant, a signal to other high-profile foreign refugees that they might not be safe in the U.S.[10]

Fed news: The Senate has confirmed Michelle Bowman as FOMC governor, taking the position reserved for community bankers.  This position tends to be a reliable voter with the chair as the position doesn’t usually attract candidates with strong monetary policy views.  Meanwhile, Nellie Liang and Marvin Goodfriend remain candidates for governorship.  Liang has been criticized for not being a strong enough supporter of deregulation, while Goodfriend has pretty much disappeared even though the administration hasn’t removed his name from consideration.  Goodfriend is something of a hawk on policy and thus we would not be surprised to see him replaced at some point.  President Trump has two vacancies remaining on the committee.

Chair Powell is launching a broad review of monetary policy and communication at the Federal Reserve.  It isn’t exactly clear what he intends to accomplish but we fear it means greater transparency.[11]

Foreign central bank news: The BOJ is sending persistent signals that it is concluding the costs of its unconventional monetary policy actions are outweighing the benefits.[12]  If the BOJ begins to reverse policy, the JPY could appreciate sharply.  In a speech yesterday, ECB President Draghi acknowledged that the Eurozone economy has been sluggish.  This may delay policy tightening further into the future.[13]  Finally, the PBOC is said to be considering its first rate cut in three years.[14]  Although the Chinese central bank has cut reserve requirements, it has avoided an actual rate cut, most likely to avoid currency weakness.  The fact that the PBOC is considering such measures suggests economic conditions are deteriorating.