It’s Thursday morning.  Today’s headlines are being dominated by Brexit.  Here is what we are watching:

Brexit: PM May suffered a significant blow overnight as two cabinet ministers resigned,[1] including her Brexit minister Dominic Raab and pensions secretary Esther McVey.  Losing Raab was particularly bad because he was supervising the negotiations over Brexit.  Over the past two and a half hours, May has been faced with withering criticism in Parliament.  It is hard to see how she survives the criticism.  A leadership contest has been called; if 48 Tory MPs agree, then a vote to remove her from power will follow.  However, if she survives (and she might, simply because there is no obvious alternative), she cannot face another similar challenge for a year.

Nevertheless, the stark reality this deal shows is that the EU held all the negotiating leverage all along.  There isn’t much of a compelling reason for the EU to quickly make a free trade agreement with Britain.  Both Frankfurt and Paris welcomed undermining London’s global financial role and the EU is big enough to restructure supply lines to exclude the U.K.  Although the Unionists in Northern Ireland are not necessarily comfortable with a hard border, they fear this outcome less than if the customs border becomes the Irish Sea, which would mean steady economic integration into Ireland and could mean eventual unification.  However, the rest of the U.K. would not relish a return to the Protestant/Catholic tensions that led to British troops being stationed in Northern Ireland for years to separate the two groups.

As we noted yesterday, a hard Brexit would be a clean break but would also lead to a deep recession with supply disruptions that could have potentially tragic outcomes.  May has tried to avoid this outcome by effectively joining the EU Customs Union (similar to Norway) as a “temporary” solution with no obvious deadline for actually leaving the customs union.  This outcome avoids the deep recession outcome but doesn’t really leave the EU.  In fact, it’s worse than staying in the EU because by staying in the customs union the U.K. would live by the same rules but get little say in creating those rules.[2]

The hard Brexit supporters are, to some extent, wildly overstating Britain’s leverage.  EU leaders have an incentive to make things difficult for the U.K. to act as a warning to nations like Italy (which, we note, is now looking to avoid fines[3] in its fiscal dispute with the EU).  It is difficult for a nation with the expansive history of Britain to discover that its status has fallen to the degree that it has little power.  Britain has much more power within the EU than it does outside of it.  There has always been a bit of separation between the British Isles and the continent as the British have always been sort of “half in, half out” of Europe.  The harsh reality is that the U.K. can either (a) have a decent economy while influencing the EU but not dominating it, or (b) risk irrelevance and a weaker economy but have much more independence.

So, where do we go from here?  The deal May negotiated is far from ideal for the U.K.  The deal, sadly, reflects less on May’s negotiating skills and more on the U.K.’s weak bargaining position.  We expect much opposition; there is nothing easier than criticizing an unfavorable agreement.  But, the other alternatives are (a) a hard break and serious economic disruption, (b) accept the deal May has negotiated,[4] or (c) hold a new referendum to better determine what the citizens of the U.K. really want.[5]  When the first referendum was held, it was a vote against the EU rules that the British knew compared to the idea of a “gauzy” glorious independence.[6]  Now that the latter outcome has been dispelled, another vote might make sense.

For now, the markets are taking today’s news as leaning toward a hard Brexit.  The GBP is down and Gilt yields are higher.  But, there is much more to come before the Brexit situation is resolved.

Chinese trade: There is some evidence of a thaw.  First, high level talks have resumed.[7]  Second, the Xi government has sent a formal response to U.S. reform demands, which may bring further talks.[8]  But, perhaps most importantly, the globalists suddenly seem to be on the ascendency.  On Tuesday, Larry Kudlow slammed trade advisor Peter Navarro, suggesting he had done the president a disservice by trying to restrict Trump’s ability to negotiate.  We surmise that Kudlow would not have made such strong statements without the president’s approval.  And, the lack of response from the White House following Kudlow’s comments suggests this is the case.  New reports suggest that Navarro is being muzzled.[9]  We view what is happening with White House trade policy is a microcosm of the “establishment v. populist” fight that has been part of the administration from day one.  President Trump tends to straddle the two groups, favoring one side or the other to achieve his goals.  When he wanted the tax bill, he favored the establishment.  His approval ratings didn’t rise with the tax bill, so he turned to trade, which did boost his ratings.  However, equity markets have suffered and perhaps this is leading to some moderation on trade, which would favor the establishment.  We would not expect a consistent policy direction in this area but look for vacillation depending on the short-term goals of the White House.

Facebook (FB, 144.22) and Amazon (AMZN, 1599.01): In this report, we only comment on specific companies when they have macro effects.  The NYT[10] has published an investigative report that reflects badly on Facebook, suggesting the company was less than forthright in its handling of the Russian election interference scandal.  And, Amazon is facing harsh criticism over its selection process for its second headquarters as regional governments offered all sorts of incentives to woo the facility[11] to a trillion dollar company (at least at one time).  The broader issue is that the perception of the tech sector has deteriorated over the past few years.  The fact that Nancy Pelosi, who is seen as a representative for the Bay Area technology industry, is facing what appears to be growing opposition to her winning the House Speaker role reflects this trend.  Overall, technology has been one of the key factors in disinflation; if the industry’s popularity weakens, it could face increased regulation.  If the goal is reflation, restraining and regulating the introduction of new technology is a necessary component.

Khashoggi update: The public prosecutor is seeking the death penalty for five of the 11 suspects involved in Khashoggi’s murder.[12]  As expected, the prosecutor did not implicate the crown prince.  This outcome is no surprise.  However, there is potential fallout from this action.  If the indicted participants face penalty, it will be difficult to convince other security operatives to participate in similar events.  After all, who would want to follow orders only to face the death penalty?  So, in one sense, this action protects MbS.  On the other, it undermines his power.

Powell: Powell’s speech yesterday was more of the same.  On the one hand, the Fed chair believes the Fed should be given credit for the strong performance of the U.S. economy.  At the same time, he acknowledges that there will be headwinds next year.[13]  Powell also confirmed that all meetings going forward, which will have press conferences, will be “live,” meaning rate changes can occur at any one of them.[14]

Mankiw rules: Here is the latest iteration of our Mankiw Rule models.  The Mankiw Rule models attempt to determine the neutral rate for fed funds, which is a rate that is neither accommodative nor stimulative.  Mankiw’s model is a variation of the Taylor Rule.  The latter measures the neutral rate using core CPI and the difference between GDP and potential GDP, which is an estimate of slack in the economy.  Potential GDP cannot be directly observed, only estimated.  To overcome this problem with potential GDP, Mankiw used the unemployment rate as a proxy for economic slack.  We have created four versions of the rule, one that follows the original construction by using the unemployment rate as a measure of slack, a second using the employment/population ratio, a third using involuntary part-time workers as a percentage of the total labor force and a fourth using yearly wage growth for non-supervisory workers. 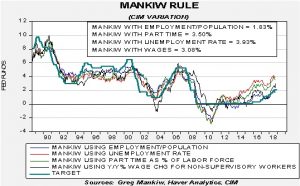 Of all the variations, the wage growth one is the most concerning, although it is still within the range of the market’s expected terminal rate, which is around 3.25%.  Having three of the four variations suggesting further tightening does support the idea that the Fed will lean toward tighter policy.