Another weak day: Risk markets continue to slide this morning, although the levels of decline are not all that large.  It’s been such a long time since we have seen weakness in equity prices that even modest retreats appear significant.  However, we don’t see anything beyond a modest correction because it appears that ample liquidity is available. 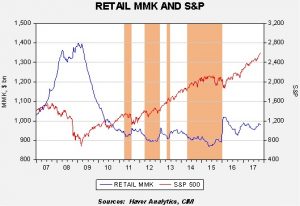 This chart shows retail money market holdings relative to the S&P 500.  We have highlighted periods since the expansion began when retail money market funds fell below $920 bn.  When money market fund levels fall below this level, equities have tended to stall or at least get “choppy.”  Currently, we are sitting on ample liquidity, which suggests to us that any pullbacks will likely be met with new buying.  This isn’t a perfect relationship.  As the crash period shows, during periods of fear, the “dash for cash” overwhelms other asset prices and equity prices will tend to decline until the panic stops.  If the tax bill falters or we have a global geopolitical event, fear could trigger a sharper pullback.  But, for now, there are no signals of recession and we are likely seeing a normal pause.

Vice Chair El-Erian?  Yesterday, there were reports that Mohamed El-Erian was being considered for the vice chair position at the Fed.  This would be an inspired pick; the chair-nominee, Jerome Powell, isn’t an economist, so surrounding him with a well-respected one as vice chair would give him a counterpart with a learned viewpoint.  And, he has another helpful characteristic—he has been the second around another strong personality.  He was at PIMCO when Bill Gross was the CIO and had to work in a position where he was designed to be overshadowed.  He proved able to manage the situation.  This would perhaps make him a better pick than Larry Summers or John Taylor, who tend to be more outspoken.  His recent comments have leaned hawkish but he has also supported easing regulations.  We suspect the financial markets would welcome Mohamed to the FOMC as it would show no specific ideological bent (a problem with Taylor) and he is a preeminent economist (an improvement over Warsh).

Mugabe out?  It appears that Zimbabwe’s long-standing president, Robert Mugabe, has been ousted in a coup, despite comments from the military that his placement into house arrest isn’t really a coup.  We are not going to spend too much time on this issue because it won’t affect most financial markets; however, Zimbabwe has been an inadvertent laboratory for really bad economic policy.  The country has suffered through ruinous hyperinflation due to poor policies, which has led to laughable currency denominations.[1]  His removal might improve the situation in the country, although given the degree of damage that has been inflicted, it may take a very long time to fix the economy.

Moore under pressure: As more reports come out about Roy Moore’s questionable proclivities, we are starting to see the betting signals crack.  As we noted earlier, we view the betting information as more credible than polls, which are subject to sampling and structural problems.  The news is getting bad for Judge Moore:

Moore had a commanding lead until the scandal broke but still managed to hold a majority until the last couple of days.  He now has less than a 40% chance of winning.  We note the WSJ editorial page has concluded the GOP would be better off losing the seat than for Moore to win.[2]  We would expect this sentiment to rise.

Fed policy: With the release of the CPI data we can upgrade the Mankiw models.  The Mankiw rule models attempt to determine the neutral rate for fed funds, which is a rate that is neither accommodative nor stimulative.  Mankiw’s model is a variation of the Taylor Rule.  The latter measures the neutral rate by core CPI and the difference between GDP and potential GDP, which is an estimate of slack in the economy.  Potential GDP cannot be directly observed, only estimated.  To overcome this problem, Mankiw used the unemployment rate as a proxy for economic slack.  We have created four versions of the rule, one that follows the original construction by using the unemployment rate as a measure of slack, a second that uses the employment/population ratio, a third using involuntary part-time workers as a percentage of the total labor force and a fourth using yearly wage growth for non-supervisory workers. 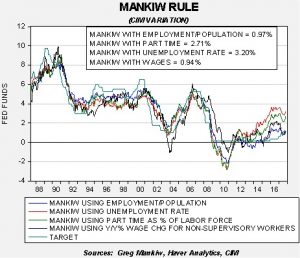 Using the unemployment rate, the neutral rate is now 3.20%.  Using the employment/population ratio, the neutral rate is 0.97%.  Using involuntary part-time employment, the neutral rate is 2.71%.  Using wage growth for non-supervisory workers, the neutral rate is 0.94%.  The modest uptick in core CPI has lifted the various neutral estimates higher, but as we have seen lately, two of the measures of slack suggest the FOMC has achieved rate neutrality, while two suggest the FOMC is well behind the curve.  We expect the FOMC to mostly split the difference and end up around 2.25% for the target at the end of next year.  However, if the two variations signaling lower rates turn out to be the accurate measures of slack, this degree of tightening will lead to increased risk of recession.  The fed funds futures put the odds of a December rate hike at 92.3%.