[Posted: 9:30 AM EST] The Trump market effect continues this morning; equities are flat to higher, but the most consistent market action has been in interest rates and the dollar, which continue to march higher.  Like everyone else, we are trying to determine the impact of Trump’s policies for the economy and markets.  At present, the focus seems to be on who is in key positions on his team.  Some establishment members are being paired off with populist insurgents and it isn’t clear if we are going to get a standard issue GOP agenda (tax cuts, deregulation) or a populist program (protectionism, deglobalization and reregulation).  The inside track seems to be for the standard issue program, because the Washington establishment knows how the system works and can get policies executed.  The populists don’t have that knowledge.  However, the Sunday papers make it abundantly clear that if Trump doesn’t execute at least some high profile populist goals, such as immigration control and trade impediments, then Trump shouldn’t bother with a second term and 2020 could bring us a left-wing populist.  This is going to be a “stay tuned” situation.

The Trump global effect also continues.  Francis Fukuyama had a good op-ed in the weekend FT in which he examines the rise of economic nationalism in the West.  Here is a salient quote from his piece:

The world today is brimming with economic nationalism. Traditionally, an open trade and investment regime has depended on the hegemonic power of the U.S. to remain afloat. If the U.S. begins acting unilaterally [ed. “America First”] to change the terms of the contract, there are many powerful players around the world who would be happy to retaliate, and set off a downward economic spiral reminiscent of the 1930s.

In the Sunday NYT Review section, Ruchir Sharma of Morgan Stanley had a solid analysis of the dangers of deglobalization.  Essentially, world growth slows, inflation rises and the dangers of war increase.  We are seeing emerging markets weaken in the face of Trump’s election.

The issue of monetary policy is less visible but equally important.  The Sunday NYT had a report on GOP desires to reduce the power of the central bank.  There is growing speculation that Janet Yellen could be replaced with John Taylor.  If he were to implement his Taylor rule for optimal interest rates, Haver Analytics calculates the fair value rate for fed funds at 1.78%.  Appointing Taylor would lead to a more mechanistic Fed and higher rates.  Wolfgang Münchau of the FT is suggesting that the consensus surrounding central bank independence is weakening.  This makes sense; in an era of reflation, it is consistent to force the central bank to accommodate fiscal spending (of course, we doubt John Taylor would join such a Federal Reserve—this is an example of the traditional vs. populist GOP).  In the meantime, expectations of policy tightening have increased. 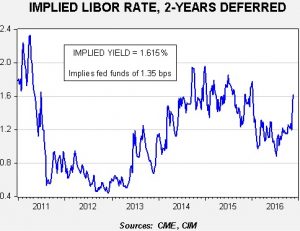 The chart above shows the implied three-month LIBOR rate, two years deferred. Note the recent spike in the implied rate.  This puts the fed funds target at 135 bps two years from now, up about 35 bps from prior to the election.  Essentially, the election of Trump is acting as a policy tightening.

Finally, we do want to note that there are growing calls from left- and right-wing populists in Italy to reject the December 4th referendum on government restructuring in Italy.  If the vote fails, PM Renzi will likely resign and the potential will rise for further financial problems in Europe.