[Posted: 9:30 AM EDT] Good morning!  We are seeing a recovery in equities this morning after a rough day yesterday.  The dollar’s a bit weaker this morning.  Energy is mixed—oil prices are continuing their slump but natural gas is on a tear due to early winter weather east of the Rockies.  Here is what we are watching today:

Italian deadline day: It appears Italy is only making cosmetic changes to its recent budget, daring the EU[1] to sanction the country.  Italian yields are ticking higher, with the 10-year sovereign hitting a yield of 3.45%.  Although we are sympathetic to Italy’s plight, this budget will do nothing more than give the economy a short-term boost.  What Italy really needs is debt restructuring, something the creditor nations in the EU are loath to offer.  Thus, we are getting a short-term confrontation over something that won’t really fix the problem.  The other solution is for Italy to exit the Eurozone and service its debt in a new local currency (another form of debt restructuring) but that process would likely trigger a crisis.  We will be watching to see if the EU rejects the budget but offers Italy an “out” by requiring modest changes.[2]

Brexit: David Lidington, an official in the May government, suggests that a Brexit deal is “almost within touching distance” and a final agreement could emerge in the next 48 hours.[3]   Although negotiators may reach an agreement (the biggest sticking point remains the Irish frontier), getting any agreement through Parliament will be the most difficult part.  First, it isn’t evident that May has enough support in her narrow coalition to win a majority on any agreement.  There are enough hard leavers among the Tories that anything less than a total abandonment of the EU is unacceptable.  Second, the government coalition partner, the DUP, will reject anything that sniffs of a plan that makes Northern Ireland not quite the same as the rest of the U.K.  It appears that some basic vote counting leaves May 37 votes short of approval, assuming any deal that emerges isn’t egregiously biased against the U.K.[4]  Thus, May will need that many Labour MPs to support the plan.  Labour’s Corbyn has ordered his party to reject any deal,[5] which means any Labour MP voting for the plan will have to reject the orders of the party leadership, always risky for the future career of an elected official.  On the other hand, there is the risk of something similar to what we saw in the TARP situation in the U.S. in 2008.  Congress initially rejected the arrangement only to trigger a financial crisis, which led Congress to reconvene, make a few cosmetic changes to the bill and pass it.  Corbyn’s goal is to bring down the government and force elections, which could bring a Labour government into power.  The question is, “will Corbyn be willing to create financial calamity to become PM?”

Merkel speaks: In what may likely be her last major speech, Chancellor Merkel will address the European MPs today in Strasbourg about the “future of Europe.”  Although there is hope among Europhiles that Merkel will offer a striking vision to further the cause of European integration, such an outcome would be quite out of character.  We expect a speech without much substance.

Early winter cold weather tends to be very bullish for natural gas prices because utilities prefer to hold inventory in November to avoid an inventory shortage in February.  This practice will tend to cause price spikes if winter arrives early.  At the same time, once temperatures moderate, prices will tend to reverse rather quickly.

Trade: The White House is returning to trade policy now that the midterms are over.  According to reports, President Trump really wants tariffs against foreign automakers.[8]  Frankly, if President Carter would have rolled out such trade impediments the U.S. automakers would have cheered.  However, it is worth noting that U.S. nameplates haven’t been all that supportive of such measures today.  This is because the industry is thoroughly globalized.  If the president does push in this direction, we would expect a sharp increase in U.S. car prices but it could be years before jobs shift to the U.S. – assuming that these jobs aren’t automated away.  Some of today’s lift comes from headlines that Treasury Secretary Mnuchin and Vice Premier Liu have resumed discussions, raising hopes that some cooling of trade tensions between the U.S. and China are in the offing.[9]  However, we doubt that much will come of these talks; American companies were something of a no-show at China’s recent import expo[10] and the administration is rolling out a new strategy to prevent China from obtaining American technological secrets.[11]  Meanwhile, negotiations between the EU and the U.S. have restarted; the EU was stalling talks before the midterms, perhaps hoping the GOP would take a drubbing and give European negotiators an edge.  Instead, the vote was more of a draw and so talks are accelerating[12]  in an atmosphere where President Trump continues to criticize NATO members for running trade surpluses with the U.S.[13]  Finally, we note the WSJ opinion writers have taken notice of Peter Navarro’s recent accusation of American business leaders being “unregistered foreign agents” for China.  The editorial board clearly sees that Navarro’s policies are deglobalizing and a threat to profit margins.  It is trying to separate Navarro from the president, perhaps hoping that Trump, at heart, supports trade.  However, it is quite possible that Navarro is in government because Trump is more in the anti-trade camp than the WSJ would care to admit.[14]

Tax threat: For now, the tax cuts enacted late last year are safe.  However, there is growing evidence that the Democrats are considering enacting bills in the House that would raise the marginal rate.[15]  Again, these would have no chance getting through the Senate or surviving a veto.  However, the mere threat of changing the rate will affect corporate behavior.  After all, the Democrats might return to power at some point and make a play to raise the marginal rate.  If businesses begin to fear this outcome, they will be inclined to use the tax code for short-term benefits rather than for long-term investment.

China data: China released data on its credit markets and the bottom line is that the pace of borrowing is slowing.  Bank loans increased in October by CNY 697 billion, down from CNY 1.38 trillion in September.  Some of that decline is seasonal as the first week of October is a holiday week, but growth was +13.1% from last year, down from +13.2% a year ago.  Shadow bank financing is falling rapidly, too.

According to Capital Economics, Chinese economic growth continues to slow. 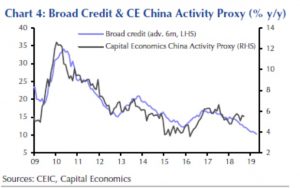 So far, the Xi government’s push to boost the economy doesn’t seem to be working.