It’s a quiet morning from the cold Midwest.  Auto tariff delay expected.   The president speaks in New York.  Investment may be weakening, and imports offer a warning.  Here is what we are watching this morning:

Tariff delay:  The decision on whether to apply sanctions on European autos is due tomorrow, but all indications suggest that the White House will delay the decision for another six months.  Talks continue and there is some speculation European automakers may move additional production to the U.S.   In an interesting development, it appears USTR Lighthizer was working on a “mini-deal” with European negotiators, which was designed to reduce tariffs on chemicals and fisheries products.  The Europeans turned down the proposal, citing rules that the WTO generally frowns upon such bilateral arrangements.  What we find interesting about this proposal is that it appears Lighthizer may be spearheading efforts to negotiate small trade wins for the administration, likely for political reasons as we head into 2020.  We doubt that the overall position of the administration has changed; trade restrictions are still preferred, but postponements and small trade deals are the likely path for the next year.  After that, we would look for a resumption of hostilities.

The president speaks:  President Trump will give a talk at the Economic Club of New York at noon EST.  We expect mostly a speech highlighting the economic successes of his administration, but the market’s focus will be on anything said about trade talks with China.  We doubt we will hear anything of substance but there is always a chance that something new will emerge.

United States:  With most S&P 500 companies having reported their third-quarter earnings, a new analysis of the reports suggests capital expenditures were up a modest 3.2% in the period.  That’s roughly in line with the tepid growth in the second quarter, but the companies indicated the growth rate will slip to just 1.8% in the fourth period, underlying the continued slowdown spawned by weaker global demand, Brexit, and the U.S.-China trade war.  The news is likely to be negative for U.S. equities.

Import warning?  West coast ports are reporting a sharp decline in import activity; inbound container handling fell 14.1% last month compared to a year ago.  Imports have a close relationship with overall consumption; the decline in imports is being blamed on trade uncertainty but if some of the drop is due to falling orders, it could be a sign of economic weakness. 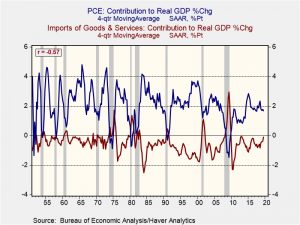 This chart shows the relationship between the annual average of consumption and import contribution to GDP.  In 1947, the two series were correlated at -57%, but beginning in 1973 the correlation has been -71%.  Since 1970, every recession has included a positive contribution from imports; since imports are a drag on growth, this means that the decline in import growth becomes a positive contributor to GDP growth.  At present, import’s contribution is barely negative at -12 bps, the smallest since Q1 2013 when this segment reported a -6 bps contribution.  If the aforementioned shipping data merely represents trade war fears, it’s likely that the data is merely picking up changes in trade patterns.  In other words, other parts of the world could be making up for losses from Asian trade.  However, if it is reflecting overall weakness, it’s an early warning that there are problems developing.

United States-Japan-South Korea:  A day after the chairman of the U.S. Joint Chiefs of Staff called on South Korea to reverse its decision to end an intelligence-sharing pact with Japan, the Japanese government said Defense Minister Taro Kono and South Korean Defense Minister Jeong Kyeong-doo will discuss the matter on the sidelines of the ASEAN defense ministers’ meeting in Thailand on November 23, just ahead of the pact’s scheduled termination at the end of the month.  There is a significant chance that the two sides will merely use the occasion to repeat their positions in the continued dispute over Japan’s behavior in Korea before and during World War II.  However, given the intensifying U.S. pressure, it wouldn’t be a surprise to see some kind of agreement come out of the meeting, especially as both countries benefit from sharing intelligence on the common threat from North Korea.  If U.S. pressure does result in a cooling of tensions, it will serve as a reminder that even as the United States pulls back from its traditional role as global hegemon, the process will not necessarily be linear.  From time to time, officials will remember the U.S. interests in freezing old tensions like the one between Japan and South Korea and will take steps to cool those tensions.  All the same, the broader trend is for less U.S. engagement in the world rather than more.

Germany:  Despite the continued headwinds from weak global growth and trade tensions, the latest Zew index of investor sentiment in Germany improved much more than expected to -2.1 from -22.8 a month earlier.  Data due on Thursday could still show Germany slipping into recession, but the Zew data raise hopes for a quick turnaround.  The news should be positive for European equities.

Italy:  New data suggest Italian banks have been a prime beneficiary of the ECB’s recent “tiering” of its negative interest-rate system.  Banks’ deposits at the ECB are now exempt from negative rates up to a certain amount, and Italian banks’ deposits at the ECB had been €38 billion lower than their maximum exemption.  In October, the data showed they therefore borrowed some €48 billion at negative rates from banks elsewhere in the Eurozone and increased their deposits at the ECB by some €37 billion, boosting profits through the arbitrage.  Given that the weakness in Italian banks has been a significant reason for pessimism about the Eurozone, any evidence that ECB policy adjustments are helping the sector should be helpful for Eurozone equities.

Hong Kong:  For the past several months, protests have mostly been a weekend affair.  Students and young office workers, the most active in the protests, tended to go to school and work through the week and turn out on the weekends.  This week’s activity suggests the unrest is starting to bleed into the workweek and is becoming increasingly violent.  Increasing anger at the police is the apparent catalyst driving the extension of unrest.  Our position on Hong Kong is that Beijing will only move the PLA into the territory as a last resort.  A massive crackdown would likely push the U.S. Congress to send bills to the White House that would sanction China, putting the president into a very difficult spot.  If he signed the bills, trade talks would likely be over and positions between China and the U.S. would harden.  If he vetoed the bills, he would be open to the charge in the upcoming election of being “soft on China.”  At the same time, what has occurred in Hong Kong is “writing the script” for nationalists in Taiwan, and undermining support for unification.

Evo’s out—now what?  Evo Morales has moved on to Mexico, who granted him asylum, leaving a power vacuum.  Those who opposed Morales were unhappy with his increasingly authoritarian behavior and his violation of the constitution’s ban on a fourth term as president.  Unfortunately, that’s about all the opposition agrees on.  It isn’t clear who will replace him and what kind of support, or mandate his replacement will enjoy.  There is the potential that civil unrest could rise and, in the worst case, spread into neighboring countries.  We continue to monitor events.

Chile:  President Piñera’s effort to end his country’s political protests by offering a rewrite of the constitution appears to be falling flat.  For the protestors, the problem is that Piñera proposed the rewrite be led by the corruption-plagued Congress.  For investors, the problem is that the rewrite creates a risk that Chile’s free-market economic model might be changed.  Chilean stocks fell 1.5% yesterday.

Oil production decline?  Financing difficulties and generally disappointing prices are leading to warnings from domestic oil firms that drilling activity is set to slow.  This may not lead to an immediate supply decline, but by later next year the slowing should become more noticeable.

Odds and ends:  European signatories to the Iran nuclear deal are “extremely concerned” over recent reports of increased uranium enrichment activities.  China is lifting its export quotas for rare earths, perhaps in a bid to prevent the loss of market share to emerging competitors.  China has used rare earths in the past as a political weapon; this increase may suggest an abandonment of that policy.