It’s Veterans’ Day; Treasury markets are closed but equities trade today.  Risk assets are lower this morning. A lot of global political news.  Update on trade.  Here is what we are watching this morning:

Trade news:  President Trump cooled recent market ardor by indicating he wasn’t planning on rolling back any tariffs.   We may get further clarification this week from the president himself, who speaks to the Economic Club of New York tomorrow.  Meanwhile, Peter Navarro continues to indicate that there will be no rollback in tariffs.  Meanwhile, on Wednesday, the U.S. will decide on auto tariffs; the auto industry is lobbying for a postponement.

Hong Kong:  A protestor was apparently shot with live ammunition from close range, and reportedly is in critical condition.  Six pro-democracy lawmakers were also arrested.  Protestors apparently set a man on fire.  Although tensions remain high, Beijing has been careful not to crack down with excessive force because Hong Kong remains a key conduit for Western finance. 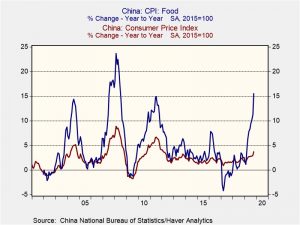 Overall CPI rose 3.8% from last year led by a 15.5% jump in food prices.  Pork inflation is up 100%, a doubling of prices, over the past year.  The African Swine Fever is the culprit for reducing supply.  Core CPI, on the other hand, remains well contained, at +1.6%.  Loan growth in October was weaker than forecast, rising CNY 661 billion, down from CNY 1.69 trillion in September.  Despite easing by the PBOC, loan growth is stagnant and will likely need further stimulus to lift growth.

Macron speaks:  This weekend’s Economist reported on a long interview with French President Macron.  He discussed, at length, the withdrawal of the U.S. from European security, calling NATO “brain dead.”  The interview was widely discussed across Europe; Polish Prime Minister Morawiecki strongly criticized French President Macron’s suggestion last week that Europe could no longer rely on the United States fulfilling its mutual defense commitments under NATO.  Turning the tables, Morawiecki questioned whether France would fulfill its obligation to spend more on defense.  Although Macron’s position is unpopular, we tend to think Macron is right.  Europe’s key problem is that it hasn’t been able to integrate Germany into the continent since its founding in 1870.  The only system that kept the peace for an extended period involved the U.S. providing a security guarantee.  Without it, Germany will need to rearm; how it does so without triggering fear is the question.

Saudi Aramco:  The company has released a prospectus for its December 5th pricing.  It does not indicate the total amount to be floated or the valuation.  The company has pledged a $75 bn dividend through 2024 to increase investor interest.  Another item of interest was the slide in profits caused by the attack on its oil gathering facilities.

European Central Bank:  As further evidence that ultraloose monetary policy has probably hit its economic and political limits, members of the ECB’s top policymaking council are preparing to tell newly inaugurated ECB President Lagarde that they want greater control over interest-rate decisions.  That sets up a potential disappointment in the Eurozone’s bond market, since investors are currently pricing in another rate cut next spring.

Oil market news:  Iran claims it has found a 53-billion-barrel reserve.  This news has not been confirmed.  Venezuela is selling oil cheaply in a bid to evade U.S. sanctions.  There are reports that shale-focused petroleum companies are preparing to pump less oil and gas, calculating that it’s better to spend and produce less today while hoping for higher commodity prices in the future.  The article quotes an estimate that shale producers expect to spend 17% less in 2020 than in 2019.  While the article suggests this renewed discipline will be financially beneficial for drillers, it doesn’t mention that there would also likely be economic costs.  As in 2014 to 2016, when plunging crude prices discouraged new drilling, the impact would probably range from decreased demand and pricing for steel to slower employment growth in the oil patch.  Coupled with the headwinds from the trade war and the lingering impact of the previously tight monetary policy, reduced oil and gas investment will mean a continuing risk of economic slowing and weaker equity markets going forward.

Odds and ends:  Farmers are turning to other lenders as banks shun the sector.  As a result, borrowing costs are rising.  The practice of auto lenders to wrap “underwater” trade-ins into new, higher interest loans examined here.  The unemployment rate for recent college graduates has increased.