[Posted: 9:30 AM EST] It’s Veteran’s Day—thanks to all those who served.  The cash Treasury markets are closed but the futures are trading.  Equities are open all day.

BREAKING: Vice Chair Fischer said this morning that policy rates will rise more slowly and less high than in previous cycles.  This statement will be dollar bearish, Treasury and equity bullish.  However, in reading the speech, it isn’t clear if his statements reflect the election of Donald Trump.  Fischer’s speech is on the international impact of Fed policy; if trade is impeded, these international effects will change.

It has been quite a week, to say the least.  Although it is early, there is a definite shift in market expectations.  We appear on the cusp of reflation.  President-elect Trump has figured out that no amount of stimulus will lift prices and reap the full benefits of growth until trade is restricted.  Thus, we have seen a sharp swing in Treasury yields.  Even though we would expect a retreat in yield during the next recession, it is likely that the secular bond bull market that began in the early 1980s is coming to a close. 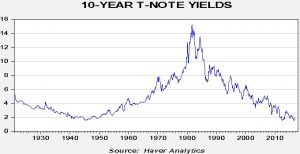 The chart above shows the 10-year T-note yield from 1921.  Perhaps the most important issue to remember is that when the last secular bear market began after the lows were made in 1945, the next peak took 36 years.  It took eight years before yields doubled.  Although the regulatory environment is different, it takes a while for bond yields to reach really high levels.  Still, the tailwind for financial assets that this bull market represents is noteworthy.

Surprisingly, the other winner has been Britain.  The GBP swooned after Brexit and the selling accelerated after PM May indicated she was going to start the process of exiting the EU in February.  However, President-elect Trump has indicated he wants to rekindle the “special relationship.”  In addition, Trump has shown a special affinity for Brexit and views his own election as a continuation of the Brexit sentiment.  If the U.S. and U.K. press ahead with improving relations, it will give PM May leverage in her negotiations with the EU.

The chart above shows the GBP/USD exchange rate.  Note the sharp decline around Brexit and in October when the Article 50 announcement was made.  Over the past week, we have seen a steady rise in the exchange rate on hopes that Trump will have warmer relations with Britain than Obama had.

The Iranian government claims its oil production hit 3.9 mbpd last month, up 0.2 mbpd.  Outside sources dispute this number, suggesting Iran’s output was mostly steady with September.  Iraq also claims its production was 4.8 mbpd, about 0.2 mbpd higher than outside sources report.  It does seem that OPEC producers are trying to ramp up output in front of the November 30th meeting in order to claim a larger market share, which should mean that if production cuts materialize, the cuts will come from a higher base for individual nations.  These announced increases, even if they are exaggerated, will tend to weigh on oil prices.

There will be much to sort out in the coming weeks as all of us try to determine what the Trump election means for markets, the economy and society.  However, we feel pretty confident that reflation is underway.  How the markets and the Fed react to this phenomenon remains to be seen.  But, the steady decline to low inflation, which has been a consistent part of the landscape for over 35 years, is changing and it will mean a different world from what we have been accustomed to.  We believe it is manageable, but it will be different.