[Posted: 9:30 AM EST] The Trump rally continues this morning; so does the bond selloff.  Like all analysts, we are still trying to figure out how the Trump administration will govern.  To some extent, we are seeing a bit of “hope and change” being projected on the markets with assumptions of regulatory rollback and tax cuts for all.  Because Trump’s plans are not detailed, it is easy to cast hopes that many favorable changes will emerge.  There will obviously be significant changes but probably not as much as the current euphoria suggests.

Still, one trend that does seem to be emerging is that Trumponomics will likely be a combination of policies that could be profoundly stimulative.  Trump does appear to be planning a large fiscal stimulus that will include infrastructure spending coupled with tax cuts and tax reform.  The usual problem with such policies, beyond the expanding deficit, is that some of the stimulus is lost to imports.  However, if you couple the fiscal stimulus with trade barriers, there is less leakage and more growth.  Of course, there is a downside (isn’t there always!); the more trade is restricted, the greater the potential for inflation.  The Fed will likely react to rising inflation, although the degree of the reaction will be dependent on the composition of the FOMC.  The issue of Fed independence is critical to how strongly the central bank reacts.  If it reacts strongly, we could get a “Volcker dollar.”  If the Fed is restrained by political pressure, the dollar still rallies but not nearly as much as if rates remain accommodative.

If this is the scenario, it will likely end secular stagnation for the U.S. but lead to much weaker global growth.  The boost to the U.S. economy will be profoundly popular with the populist classes, less so for the establishment, who will lose some of the benefits of globalization.  From a market perspective, we will likely see rising interest rates, a stronger dollar (the magnitude determined by Fed policy), stronger equities and weaker global growth and foreign markets (America First!).

Here is an interesting quote from Sen. Sanders.

Donald Trump tapped into the anger of a declining middle class that is sick and tired of establishment economics, establishment politics and the establishment media. People are tired of working longer hours for lower wages, of seeing decent paying jobs go to China and other low-wage countries…To the degree that Mr. Trump is serious about pursuing policies that improve the lives of working families in this country, I and other progressives are prepared to work with him. To the degree that he pursues racist, sexist, xenophobic and anti-environment policies, we will vigorously oppose him.

It isn’t much of a stretch to see the Warren/Sanders wing supporting much of what we have outlined above.  They won’t necessarily like the tax changes but will probably get behind the trade activity.  And, it should be noted that the president can do much on trade unilaterally.  Tax policy will be harder because it will need Congressional support.

In a surprise move, earlier this week, Indian PM Modi abolished the existing banknotes of INR 500 ($7.50) and INR 1000 ($15.00).  Thus, they are no longer legal tender, although they can be deposited into the banking system until December 30.  This is a big deal; 86% of the value of all cash in circulation is denominated in these bills.  This was done to undermine corruption and apparently prevent further counterfeiting.  He did say that new INR 500 notes will eventually be issued along with the creation of an INR 2000, probably with greater protections to prevent counterfeiting.  One of the potential outcomes from this decision could be an increase in gold demand.  India is the second largest consumer of gold, buying 848.9 metric tons of gold last year.  Uncertainty about the state of Indian currency might lead households to buy gold as a store of value, which is already a factor in gold demand.

This chart shows current crude oil inventories, both over the long term and the last decade.  We have added the estimated level of lease stocks to maintain the consistency of the data.  As the chart below shows, seasonally, inventories tend to stabilize into the end of November and decline into year’s end.  Refineries are coming back from maintenance, which boosts demand.  Still, inventories remain quite elevated. 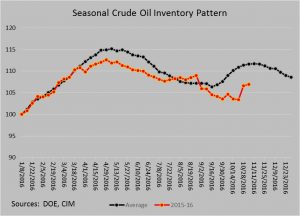 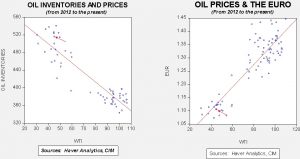 Based on inventories alone, oil prices are overvalued with the fair value price of $39.89.  Meanwhile, the EUR/WTI model generates a fair value of $45.64.  Together (which is a more sound methodology), fair value is $41.96, meaning that current prices are above fair value.  Most likely, the divergence from fair value is due to hopes of an OPEC deal that would boost prices.   The IEA warns today that non-OPEC producers are raising production, suggesting that Brazil, Canada, Kazakhstan and Russia could raise output by up to 0.5 mbpd.  Given current OPEC output, cuts ranging from 0.8 mbpd to 1.3 mbpd will be necessary to bring output down to the target range of 32.5 mbpd to 33.0 mbpd.  With non-OPEC output rising, OPEC really needs to make credible cuts at the Nov. 30th meeting.  If it fails, oil prices could fall into the high $30s.