[Posted: 9:30 AM EDT] Equities continue to rally, although we note that we have seen some weakness emerge after a rather hawkish statement from the BOE.  Here is what we are following this morning:

BOE: The Bank of England surprised the markets this morning by indicating the economy is at full utilization, suggesting tighter policy is likely.  The bank did leave policy unchanged, not wanting to raise rates before Brexit.  Governor Carney spent much of his press conference discussing how Brexit could put the bank in a very difficult spot, where it faces rising inflation and a weaker economy.  Brexit could disrupt supply chains and boost prices rapidly.  If these price hikes stick, the BOE would likely be forced to raise rates even though the economy is suffering.  The important message from Carney was that when faced with weaker growth and higher inflation, the latter problem will be addressed by the central bank.  The GBP rallied on the news[1] and Gilt yields rose.

Brexit: Surprisingly positive comments from U.K. Brexit Secretary Dominic Raab[2] led to a rally in U.K. financial assets yesterday. There were comments suggesting a financial services deal is close to conclusion.  Raab indicated that an overall tentative agreement would be done by November 21.  It isn’t exactly clear what positive trends Raab has seen to support this position.  The U.K. side seems to be much more optimistic than the EU negotiators.  We note the EU has indicated this morning that comments from the U.K. were “misleading.”[3]  We suspect that U.K. negotiators are building up hope with the idea that the EU won’t want to puncture the optimism.  That is probably a misread by the U.K.

Taiwan tensions: The U.S. Navy has been conducting “freedom of navigation operations” in the South China Sea and in the Taiwan Strait.  These operations have raised tensions with China,[4] which sees Taiwan as a province.  There is a growing independence movement in Taiwan as evidenced by recent demonstrations calling for a referendum on the issue.[5]  The show of force from the U.S. is a problem for China on several levels.  First, China fears that Taiwan voters may see U.S. actions as a signal that the U.S. would defend Taiwan if it were to declare independence.  China would prefer that the U.S. project a degree of ambiguity to temper Taiwan’s independence movement.  Second, the Xi government has bolstered its support by pushing nationalism.  It will be difficult for the government to back down if Taiwan does move to formalize itself as a separate nation.  If the U.S. backs Taiwan, we are facing a superpower conflict.  We have not reached critical mass but we could see tensions rise rapidly soon.

Pressure on MbS: The U.S. is pressing the Kingdom of Saudi Arabia (KSA) to accept a ceasefire and peace talks in Yemen.[6]  The war in Yemen has been conducted by Crown Prince Mohammad bin Salman (MbS); he has arguably made a hash of the conflict that is brutal and seemingly without end.  The U.S. may be taking advantage of the turmoil surrounding the death of Jamal Khashoggi and the subsequent weakness of MbS to push for an end to this conflict.  To some extent, we view the U.S. action as a sign that MbS is on the ropes and thus the U.S. wants to take advantage of his current weakness.

Fed eases capital rules: The Fed has proposed easing some of the Dodd-Frank rules on less than huge banks.  It would ease the liquidity ratio and make stress tests less frequent.  The bank lobby complains the deregulation doesn’t go far enough; some regulators bemoan the easing.  Usually, when both sides are less than thrilled, the change has struck a proper balance.[7]  Although we usually favor deregulation, the easing of liquidity ratios does concern us.  Maintaining liquidity is a deadweight when times are good; one can’t have enough liquidity when things go sour.  We view the stress tests as pure regulatory capture.  They give the illusion of regulatory action but are usually gamed and thus don’t really offer a real world look at how a bank holds up in a crisis.  If the changes really favor banks, we would expect bank equities to rally in the coming weeks.

Caixin PMI: The Caixin PMI came in a bit better than forecast, at 50.1 compared to 50.0 last month.  Unlike the official data reported yesterday, we did see a modest lift in the export component.  However, the overall export index does suggest that exports will decline in the coming months and the export boost we are seeing is likely from firms front-running proposed tariffs.

The politburo came out yesterday and admitted the economy was struggling and promised additional support.[8]  This has given a modest boost to equities, although the rise appears to be mostly in large caps.[9]

Oil stocks have increased rapidly this autumn as refinery runs declined due to seasonal maintenance and continued elevated U.S. production.  This has been a bearish factor for oil prices. 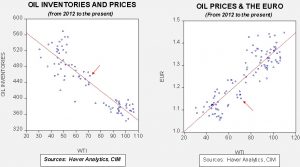