Good morning and Happy Monday!  Global equity markets are on a tear this morning; we are seeing a spike in interest rates, a drop in gold prices, and a surge in oil prices.  All this looks like a trade based on an improving business cycle.  There appear to be two factors behind the optimism, the election outcome, and good news on a vaccine.  Those two items lead off our coverage.  Brexit news comes next, followed by China news.  There was a shakeup in Turkey over the weekend, and the war in the Caucasus continues.  There is rising noise about U.S. negative interest rates.  We close with odds and ends. Here are the details:

Election update:  Over the weekend, the major news media called the election for Biden.  Although the Trump campaign is continuing its legal efforts to reverse Biden’s current lead, the likelihood of success is low.  In our opinion, the bigger problem for the president is that there doesn’t appear to be broad enough support to turn the apparent outcome.  Large company CEOs have no interest in a disputed election.  Although business prospered under Trump’s government, there was always an edge of uncertainty.  A company could find itself under fire in a tweet at any time.  We doubt Biden will be as regulatory friendly as Trump (a bigger deal for smaller companies), but he will also be more predictable.  Perhaps the biggest reason that the president won’t prevail in his legal quest is because his party has moved on.  Even if Trump won a second term, he would have been a lame duck on Inauguration Day.  This is a hard lesson all second-term presidents face and virtually none expect.  In reality, Senator McConnell is trying to make sure he stays majority leader, and if he is successful in that goal (prediction markets suggest he will be), he will be focusing on 2022.  A messy legal fight could complicate those goals.  In addition, GOP candidates for 2024 are already starting to think about their campaigns.  Donald Trump will remain politically powerful; running a “scorched earth” legal campaign probably doesn’t help his future role.  There is still a chance for political turmoil in the Electoral College.  In 1876, we saw a few states send multiple slates of electors.  Although this is a possibility this time around, we suspect the support for this tactic will wane.

The reaction in financial markets is probably less about who won and more about having a winner.  There was elevated fear going into the election, and the fact that we are not seeing a hung election and widespread civil unrest is triggering a relief rally.  As we will show in Friday’s Asset Allocation Weekly, although equity markets themselves were not exhibiting clear evidence of fear, the derivatives markets had ample evidence of hedging behavior.  A big reason behind the rally is the lifting of these hedges.  The additional fact that we will probably have a divided government means fears of a leftist swing in policy is much less likely.

Finally, investors should be aware that populism isn’t dead by any means.  The next time around, we are more likely to see a populist figure from the right that will borrow ideas from the left, repackage them in a form that has broader appeal and create a new coalition, perhaps something that looks like Nader’s proposal.[1]  In other words, the populist mantle will be captured by a less divisive and more effective political figure with a more consistent political agenda.  Such an outcome will not be friendly for financial markets or capital.

COVID-19:  The number of reported cases is 50,517,420 with 1,257,922 deaths.  In the U.S., there are 9,973,563 confirmed cases with 237,584 deaths.  For illustration purposes, the FT has created an interactive chart that allows one to compare cases across nations using similar scaling metrics.  The FT has also issued an economic tracker that looks across countries with high frequency data on various factors.

Brexit:  As year’s end approaches, negotiators continue to work toward a deal to avoid a hard break between the U.K. and the EU.  One sign of hope is that PM Johnson and EC President von der Leyen have kept lines of communication open.  In all likelihood, it will be at this level that a deal will be struck.  EU chief negotiator Barnier is going to London for talks this week.

China:  Chinese officials have not had any major public reaction to the U.S. election news.  We do expect that the Trump tariff policy will be scaled back.  Although the deficit with China did narrow under Trump, the impact of tariffs was partially offset by CNY weakness.  We are seeing the CNY strengthen.  A Biden presidency will probably be less focused on tariffs and more on multilateral policy.  Meanwhile, China’s trade surplus is expanding as the world economy slowly recovers.

Turkey:  Over the weekend, President Erdogan fired Murat Uysal, the head of Turkey’s central bank.  Erdogan’s son-in-law, Berat Albayrak, resigned from the finance and economic ministries.  The TRY has been hammered in financial markets over the past 15 months, as the central bank has refused to raise rates to prop up the currency.  The reshuffle is thought to be in response to the currency crisis, but in fairness to Uysal, he was simply following Erdogan’s preferred policies.  The new central bank governor, Naci Agbal, was likely brought in to raise interest rates; this has lifted the TRY this morning.  Turkey’s financial situation is dire.  Foreign reserves are falling rapidly, and Ankara may be forced to ask for an IMF bailout. 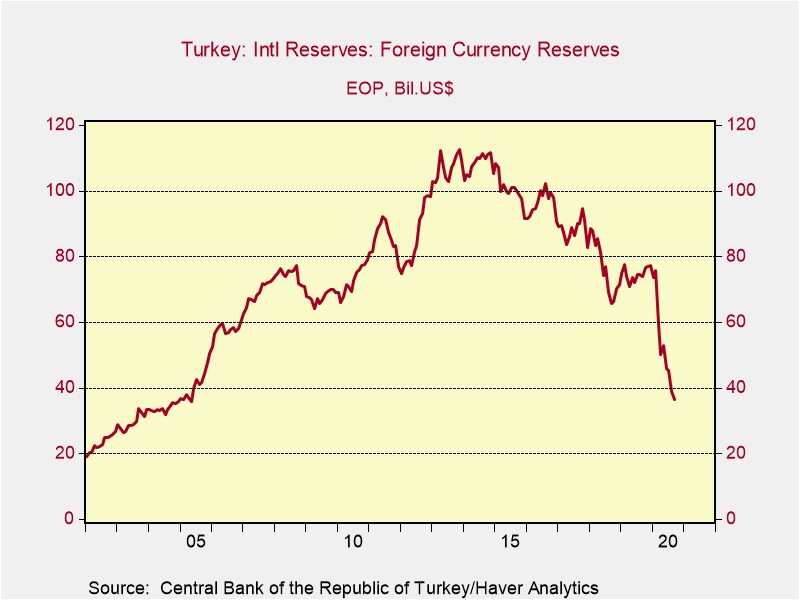 Caucasus:  Azerbaijan claims it has captured a major city in the Nagorno-Karabakh region.  According to unconfirmed reports, Shusha has fallen to Azerbaijan forces.  Armenia denies that the city has fallen.  Capturing Shusha would give Azerbaijan the high ground overlooking the regional capital city of Stepanakert.

Negative interest rates:  Although today’s market action belies such fears, we are seeing analysts suggest that the U.S. could see negative long-term interest rates.  There has always been a subset of the analyst community that has thought negative rates were possible; we are now seeing new members of the chorus.  Although we are not in that camp, we will be watching to see where the Fed’s toleration line is for long-duration Treasuries.  There has been a boom in housing, and rising mortgage rates would not support that effort.  Our guess is that the Fed will cap the 10-year at 1.25%.

Odds and ends:  Here are a couple of stories we are watching: