Market action is a bit odd this morning; risk-on assets are trading lower but risk-off are weaker as well.  We suspect sentiment remains high but there are some concerns about the trade details.  CEOs are much more pessimistic than the population, in general.  Iran is threatening again.  Here is what we are watching this morning:

China trade:  Optimism about a trade deal has sent global equities higher, pushing the S&P to new records.  However, we are noticing a bit of doubt creeping into market sentiment.  Although there has been talk of tariff rollbacks, we note they started on the Chinese side.  It is quite possible China is trying to frame the deal in public and, given the positive market reaction, force the U.S. to capitulate or suffer a downdraft in risk assets.  It appears to us that the administration is divided.  Larry Kudlow has said that any deal will include a tariff rollback; Peter Navarro and others do not agree.  In an interview this morning on NPR, senior U.S. trade advisor Navarro reiterated his statement yesterday that a “phase one” trade deal is still not finalized and there has been no agreement to roll back any of the tariffs that the United States and China have already imposed on each other.

We know from how negotiations went in May that the establishment faction in the White House (Kudlow, Mnuchin) thought they had a deal.  The trade hawk faction (Navarro, Lighthizer) told the president that China was reneging on the deal.  President Trump blew up the agreement and equity markets tumbled.

The Chinese Communist Party is trying to “re-trade” the agreement, said Stephen Bannon, former White House adviser. He added that rolling back earlier tariffs “goes against the grain” of the original October agreement.

“There’s nothing that Trump hates more” than someone backtracking on a deal, he said.

The consensus narrative in the financial markets is that we will get a short-term deal that will pause the trade war until the elections.  That narrative makes a lot of sense; over the past 25 years, consumption has become increasingly sensitive to asset prices and so a stronger equity market going into 2020 should help the president’s reelection.  But, as the above quote shows, there is a streak in Trump’s behavior that he viscerally reacts against being taken as a fool.  If he concludes that China has been “front-running” the narrative to trap him into rolling back tariffs, it would not be a surprise if he scuttles the whole deal.  We are not out of the woods quite yet.

China:  There are more reports of smaller, provincial banks suffering bank runs in the face of continued slowing in China’s economy and a government crackdown on risky lending.  Beijing has already bailed out three regional banks this year.  This week, there was a notable run on Yingkou Yanhai Bank, the country’s third-fastest growing bank in terms of loan growth between 2011 and 2018.

Hong Kong:  After the death of a youth who was injured near a recent anti-China protest, his fellow students rampaged through the Hong Kong University of Science and Technology, vandalizing the president’s residence and multiple student facilities.  The death is likely to encourage further protests and violence over the weekend, adding yet more downward pressure on the Hong Kong economy and financial markets.

Japan:  Prime Minister Abe has told his government to develop a 15-month fiscal stimulus plan to get ahead of the slowdown in global growth, an expected drop in construction after next year’s Tokyo Olympic Games and the risk of weaker demand after the October hike in consumption taxes (discussed in our recent Weekly Geopolitical Reports from October 28 and November 4). Abe’s plan would include a supplementary budget for January through March 2020 and then increased spending for the fiscal year ending March 2021.  The scale of the stimulus hasn’t been decided yet, but it will focus on infrastructure repair and investment.  What’s notable here is that it’s just one of many signs we’re seeing that politicians around the world are getting more comfortable with the idea of loosening government purse strings to boost economic growth.  Part of that stems from a realization that ultraloose monetary policy has probably already done about as much as it can.  Just as important, politicians are realizing that they could take advantage of extremely low interest rates, at least to begin with.  After Abe’s announcement, for example, Finance Minister Aso said the government might finance the stimulus program with 50-year bonds, despite his ministry’s previous reluctance to borrow beyond 40 years.

NATO:  In an interview with The Economist, French President Macron said Europe must face facts regarding the “instability of our American partner” under President Trump.  According to Macron, Europe’s situation is becoming more tenuous as the United States retreats into isolationism, so it “must become autonomous in terms of military strategy and capability.”  Macron’s statement has already gotten pushback from NATO Secretary General Stoltenberg, German Chancellor Merkel and British Foreign Secretary Raab, but we think it confirms just what we’ve been saying.  As the U.S. steps back from its traditional role as global hegemon, it will encourage or even require many foreign actors to rearm and strike out on their own path to protect their national interests.  That’s likely to produce a more chaotic international security environment and unfreeze many old disputes, which will ultimately raise risk premiums and cut into the value of many types of assets.

Federal Reserve:  FRB Atlanta President Bostic said the Fed’s decision to cut interest rates last week was unneeded, and that he would have voted against it if he were on the policy committee this year.  The statement adds to the growing sense that U.S. rates are likely to stay on hold and that there’s a high bar for additional rate cuts in the near term.

CEOs vs. the rest:  The Conference Board collects lots of survey data, including consumer confidence and CEO sentiment data.  The spread between the two series is at a record point.

As a recession indicator, this one isn’t very useful.  There is no specific level of spread that signals a recession, although a reading under -60 has been consistent with downturns.  A narrowing of the spread from low levels is usually the sign that a recession is near.  Or, to put it another way, the CEO survey is something of a leading indicator of a downturn in consumer sentiment.  In the current context, a drop in consumer confidence should be treated as a sign that a downturn is more likely.  So far, consumer confidence is holding up rather well. 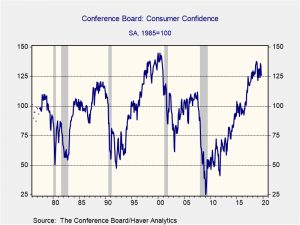 Iran issues:  As noted earlier this week, Iran has been increasing its uranium enrichment, which is slowly undermining the nuclear deal.  Adding to pressure is a decision by Iran to bar a U.N. nuclear inspector from entering a nuclear facility and has prevented her from leaving Iran.  Iran claims she tested positive for explosive nitrates.  This provocation is occurring as the U.S. and Israel are pressing European signatories to the Iran deal to abandon it.  If the nuclear deal completely fails, we would expect Iran to steadily increase its uranium enrichment activities.  Whether or not it moves to make weapons-grade material will depend on if it thinks it will get a response from either Israel or the U.S.  At this point, we don’t think the Trump administration will react, and Israel doesn’t currently have the ability, using conventional weapons, to prevent Iran from having nuclear capabilities.  This means, of course, that if Israel really believes Iran is an existential threat, it should use its (officially denied) nuclear capability to launch a first strike against Iran.  If the U.S. doesn’t want to attack Iran, one way a nuclear war could be averted would be to give Israel the most potent “bunker buster” conventional bombs which, so far, the U.S. has declined to offer.  The bottom line is that the oil market is mostly ignoring this issue; however, there is a small, but not zero, tail risk of significant magnitude.

Odds and ends:  Italy is now the most risky credit in the Eurozone.  The EU says that the U.S. won’t apply auto tariffs on European auto exports.  China has lifted a ban on Canadian pork and beef imports, applied after the arrest of a Huawei (002502, CNY 2.57) executive.  It appears the move isn’t a signal of a thaw, but rather that China may simply need the meat.