[Posted: 9:30 AM EST] The second episode of the Confluence of Ideas podcast is available!

Trade:  Reports indicate the U.S. and China are preparing a phased reduction of tariffs.  The details are scarce; so far, the reports suggest a rollback of tariffs on a proportional basis.  However, it is still unclear if this news means that existing tariffs or proposed tariffs are part of the agreement.   In some respects, we don’t know much more on this issue than we did yesterday.  We still don’t have a venue for a signing ceremony and the mechanics of the tariff reductions are still unknown.  If it ends up that we simply see tariff reductions but nothing new to show for it but agricultural purchases, it’s hard to see what the point of the tariffs were in the first place.

There is an element of the rollback that looks like the U.S. is trying to avoid economic problems before the election.  If that is the case, there are two issues that emerge.  First, China will press hard to get as much as it can in this phase because it likely concludes that American negotiators are in a disadvantageous spot.  Second, if Trump wins reelection, look for the tariffs to return.  We still believe that tariffs and trade impediments are a core position of this president and the current negotiations represent a tactical retreat, not a surrender.  However, for the short term, a rollback in tariffs and a trade truce is bullish for risk assets.

China financial issues:  China’s massive debt accumulation over the past 15 years has been well documented and, at some point, this mountain has to be addressed.  Debt problems are difficult to avoid; investment is hard because it’s about predicting the future and there will always be mistakes made.  It’s always important to remember that the opposite side of debt is an asset; in other words, one party’s debt represents another party’s asset.  When a debt problem emerges, the political system is where the “cost of adjustment” is decided.  In other words, how much pain will the debtor suffer relative to the creditor?  China appears to be moving to address this issue.  After years of forcing creditors to continue to provide credit to dodgy borrowers, the government appears to be allowing firms to fail and bankruptcy courts to adjudicate the adjustment costs.  We view this as good news.  Dealing with the problem is much better than simply putting it off.  However, the process will almost certainly slow economic growth; in fact, forcing the economy to slow is a necessary component because pushing growth increases the odds of malinvestment.  A slowing Chinese economy will adversely affect a world economy that has been dependent on Chinese growth but dealing with the debt issue in a systemic fashion reduces the likelihood of a financial crisis.  The key unknown is if the CPC can manage expectations and its own legitimacy in the face of slowing growth.  Chairman Xi has consolidated power and has a favorable chance to manage this transition.  But, it isn’t certain he can maintain the legitimacy of the CPC which had staked its reputation on delivering growth.  In related news, Chinese financial officials appear to be consolidating the banking system to stabilize it and avoid runs from small bank failures. 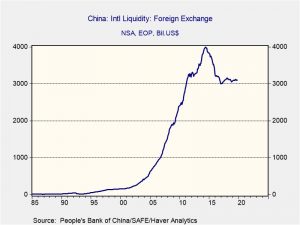 China-Hong Kong:  In what may be Beijing’s new approach to quelling the anti-China protests in Hong Kong, a key advisor to the Chinese government warned the city would suffer dire consequences if it doesn’t adopt a national security law as required by its mini-constitution.  Adopting such a law would likely allow a clampdown on the protests under the guise of being a home-grown policy; failure to adopt the law would be a ready excuse to fire municipal Chief Executive Lam.

United Kingdom:  With the campaigning for the December election now in full swing, all the major parties are trying to gather support by promising big hikes in government spending.  For example, Chancellor Sajid Javid of the ruling Conservative Party, which probably has the best chance of winning the election, today announced a change in the government’s fiscal rules that will allow for spending £22 billion more on public infrastructure like roads and railways each year going forward.  Not to be outclassed, the Labor Party said it would loosen its fiscal targets to allow for £55 billion more on public investment each year.  Fearing a post-election borrowing binge, PIMCO Chief Investment Officer Andrew Balls says he is therefore steering clear of gilts.

Eurozone:  The European Commission cut its forecast for the Eurozone’s 2019 GDP growth to just 1.1% – a pace it said was “usually associated with the brink of recession.”  Citing its pessimism regarding trade tensions, the risk of a disorderly Brexit and soft global manufacturing, the Commission also cut its growth forecast to 1.2% for both 2020 and 2021.

Japan:  For the first time in two years, a special Diet commission has resumed debating a first-ever amendment to Japan’s pacifist constitution.  Although the amendment would focus on changing the law related to referendums, it would also touch on Prime Minister Abe’s dream of revising the war-renouncing Article 9 in order to allow Japan to boost its military and take a more muscular approach to international affairs.  Changing Article 9 would not only require winning a two-thirds majority in both chambers of the Diet, but it would also require winning a majority in a national referendum.  A key question is:  Does anyone really want to see Japan rearm?

Tech:  The technology firms can’t seem to get out of their own way.  There are reports that Twitter (TWTR, 29.54) employees engaged in spying activity on behalf of the Saudi government.  The state of California is investigating Facebook’s (FB, 191.55) privacy practices, accusing the firm of not complying with subpoenas.   With regards to Facebook, internal emails surrounding Whatsapp appear to indicate that the former may have engaged in anti-competitive practices.

They are Germans, after all:  Yesterday, we noted that Germany was warming to EU-wide deposit insurance.  The headlines suggested a breakthrough.  Well, it appears that this “warming” has come with caveats.  Essentially, Germany wants

Point #1 would be deadly for Italy, forcing banks to increase their capital because they hold lots of Italian government bonds.  Point #2 will make banks in Greece engage in massive asset liquidation and point #3 undermines Ireland’s corporate policy.   Without changes, the German plan looks dead on arrival, but simply putting it out there will allow Germany to say it supports bank deposit insurance; so, it has some PR value, but little more.

In other German news, Defense Minister Annegret Kramp-Karrenbauer, who is also leader of the governing Christian Democratic Party, said in a speech today that Germany should be “more courageous” in pursuing its strategic interests and should take a more muscular approach to international security, including boosting its defense budget and beefing up its military presence in Africa and Asia.  In part, her appeal probably reflects pressure from President Trump.  However, it also probably reflects the new dynamics we’ll see as the United States pulls back from its traditional role as global hegemon.  A key question is:  Does anyone really want to see Germany rearm?

Spanish elections:  Spain goes to the polls on Sunday for the fourth time in four years.  Voting intentions suggest it will probably lead to another inconclusive result.

BOE:   The Bank of England, as expected, left rates unchanged but there were two dissents calling for a rate cut.  The GBP fell on the news.

In the details, U.S. crude oil production was unchanged at 12.6 mbpd.  Exports fell 1.0 mbpd while imports declined 0.6 mbpd.  The unexpected rise in stockpiles was mostly due to falling exports and weaker refinery demand.

This chart shows the annual seasonal pattern for crude oil inventories.  We are now into the autumn build season which usually lasts into early December.  This week’s rise is normal, but the pace is accelerated.

We continue to monitor the autumn refinery maintenance season.

This week’s drop in utilization is unusual; we would expect a recovery next week.

Based our oil inventory/price model, fair value is $58.53; using the euro/price model, fair value is $50.13.  The combined model, a broader analysis of the oil price, generates a fair value of $52.23.   We are seeing the divergence between dollar and oil inventories narrow as the dollar weakens and oil stocks rise.  We expect the Saudi IPO process to support oil and any positive news on the trade front has been lifting oil prices as well.