[Posted: 9:30 AM EST] The second episode of the Confluence of Ideas podcast is available!

Optimism over trade remains elevated; equities are moving higher and safety assets, Treasuries and gold, are suffering.  Here are the details:

China trade: There is a lot of news on trade.  First, there has been active consideration on both sides to roll back tariffs to secure a deal.  Reports indicate that the U.S. might remove the 15% tariff on $112 bn of Chinese goods.  Any agreement likely will also remove the $156 bn of tariffs scheduled for mid-December.  What is China offering?  The key “give” is to buy more agricultural goods, but the promise to buy $50 bn over two years is really more about returning to status quo ante.  In 2016 and 2017, China purchased around $20 bn each year.  Lifting to $25 bn per year is an improvement, but not a blockbuster.  For farmers, this deal would be welcome, but they probably would have preferred to have avoided the issue altogether.  The second part of China’s offer is to stabilize the CNY/USD.  We are seeing signs of that already.  However, this also isn’t a big ask; China has been worried that an overly weak currency could trigger capital flight and there is also concern about China’s growing corporate dollar-denominated debt.  Thus, the weaker CNY threat was probably more symbolic than real.  Third, China has offered rather vague promises to open up certain markets and respect intellectual property.  We harbor serious doubts that China will follow through on these promises in any significant manner.

So, we will likely get a deal. In the end, it’s hard to see how much progress was made.  The ultimate goal of the trade conflict was to force China to change its economic model.  Using the savings identity, 0 = (I-S) + (G-Tx) + (X-M), China’s private sector oversaves, leaving a negative balance in the first term of the equation.  To balance, either the government needs to run larger deficits or the nation needs to run a trade surplus.  The U.S. wants an end to the private sector oversaving.  We would argue that tariffs are probably not the best way to force this change; the bill proposed by Senators Hawley and Ballwin would likely be more effective.[1]  In the end, there was much turmoil but not much evidence of progress.

Still, this outcome is supportive for equities. 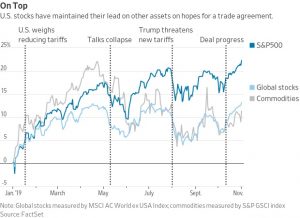 When tariff reductions are being considered, equities tend to rise, as do commodities.  When new tariff threats emerge, the opposite occurs.  Given the cautious positioning seen in the financial markets, a significant lift in equities would not be a huge surprise.  At the same time, the president has proven he can turn quickly to put tariffs back into the conversation.  Increasingly, though, this looks like it might be a second-term issue.

Government shutdown?  As noted earlier, we have not commented much on the domestic political situation, mostly because it hasn’t had a measurable impact on financial markets.  However, the current tensions might spill over into an area that would matter.  Without new spending bills, the government might be forced to shut down somewhere in the next seven weeks.  A shutdown could dampen this current “era of good feelings” and pressure equities.

China easing?  The PBOC made a modest cut to its new policy rate, the Medium-Term Lending Facility, to 3.25% from 3.30%.  The five-basis point move won’t trigger a huge economic response, but it is likely that this action will be the first of a few to ease monetary conditions in China.  If China were to move more aggressively to boost its economy, along with trade peace, we could see a further lift to risk assets.

Iran: In a bid to say it won’t be ignored, Iran announced it will increase its uranium enrichment activity.  This move further erodes the Iranian nuclear deal and will make it more difficult to European nations to support Iran against U.S. sanctions.  Although this move might increase tensions in the region, we doubt the U.S. will respond to this action; Iran is already heavily sanctioned, and the U.S. has no inclination to engage in military action against Iran.

Asia trade: The China-led Regional Comprehensive Economic Partnership (RCEP) is beginning to look like a dud.  In recent meetings India refused to join, reducing the impact of the partnership.  The rest of the members refused to ink an agreement.  China did try to spur activity, with Chairman Xi at the Shanghai Trade Expo touting his nation’s love of imports, but his comments didn’t help talks at the RCEP meetings.  Part of the reason might be China’s behavior in the region, which has not instilled confidence.

Other China news: There was little official news from the Fourth Plenum meetings.  However, as the meetings ended, some items have filtered out.  First, Ren Xuefeng, the CPC secretary for Chongqing, committed suicide at the meetings by leaping off the roof of the hotel where the gathering was being held.  There are rumors swirling that he may have been part of a purge by Chairman Xi, or was caught up in a local scandal.  Second, the general consensus from the meetings’ end is that Xi is firmly in control.  Third, the meetings did discuss Hong Kong.  We note that Hong Kong’s leader, Carrie Lam, has been called to Beijing for an unscheduled meeting with Vice Premier Han Zheng.  The latter is the state leader in charge of Hong Kong.

In other China news, officials of TikTok, the Chinese subsidiary of the privately held ByteDance, have refused to testify at congressional hearings that were scheduled for today.  The company, popular with Americans, is under scrutiny for its privacy controls.  The U.S. has launched a national security review of the company.

China-Taiwan: Two months before Taiwan’s presidential election, the Chinese government is offering sweeteners to Taiwanese companies and individuals to ensure a pro-Beijing outcome.  For Taiwanese businesses operating on the mainland, the measures would provide preferential land-use rules, the right to invest in passenger and air cargo services, and the ability to apply for financial guarantees from local government funds.  For Taiwanese individuals studying or living on the mainland, the measures would ease property purchases and provide Chinese consular protections when traveling abroad.  As we reported yesterday, China’s wooing comes as the Trump administration pressures Taiwan to restrict its technology sales to Chinese telecom giant Huawei (002502.SZ, 2.57).

United States: A Financial Times report shows the Trump administration launched just 25 new cases alleging criminal antitrust violations in 2019, marking the biggest drop-off in enforcement since the 1970s.  The figures highlight the administration’s focus on company-friendly deregulation, even as its trade and immigration policies get more attention from the press.

A return of the swing producer?  OPEC has acknowledged that its production will likely decline over the next five years due to the encroachment of shale production and rising climate activism dampening overall demand.  The report by the cartel seems to suggest that it will not fight to boost market share, and instead will reduce its own output to maintain prices.  This is the traditional role of the swing producer in the oil markets.