Our Comment today opens with an update on the Russia-Ukraine war.  We next review a wide range of other international and U.S. developments with the potential to affect the financial markets today, including multiple reports related to China.  Importantly, there are conflicting reports about China’s readiness to ease its Zero-COVID policies, which have done so much to impede Chinese and global economic activity.

Russia-Ukraine:  As Ukrainian forces continue to press their counteroffensives in the northeastern Donbas region and in the southern region around Kherson, Russian forces continue to strike back with air, missile, and kamikaze drone attacks against civilian infrastructure across Ukraine.  The Russians are also attempting to counterattack with ground forces, but reports indicate a contingent of their Pacific Fleet Marines took heavy casualties in the Donbas recently.  At the same time, Russian financier Yevgeny Prigozhin continues to throw his Wagner Group mercenaries against the Ukrainian city of Bakhmut in the Donbas region and is reportedly close to taking the city, albeit with significant casualties.  However, most Western observers that we follow believe that the capture of Bakhmut would give Russia little strategic advantage; rather, the Wagner Group attacks there appear to be designed to bolster Prigozhin’s leadership credentials, perhaps for his take over as Russian defense minister or for him to eventually seize power from President Putin. 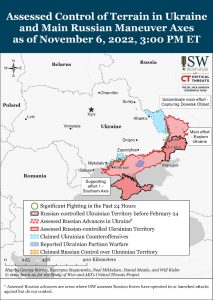 United States-China:  Just one month after the U.S. imposed a series of tough, new restrictions on sending advanced semiconductor technology, goods, or services to China, reports show Chinese tech firms such as Alibaba (BABA, $69.81) have found at least one workaround as the firms are tweaking their most advanced chip designs to reduce processing speeds, allowing them to avoid U.S. sanctions when the chips are shipped back to China after being made in Taiwan.

China-Solomon Islands-Australia:  Illustrating how some countries will likely try to play the evolving China-led geopolitical bloc against the U.S.-led bloc for their own advantage, last week the Solomon Islands took delivery of a Chinese domestic security aid package consisting of two water cannon trucks, 30 motorcycles, and 20 SUVs for its police force, just days after it took delivery from Australia of 60 short-barreled police rifles and 13 vehicles.

Chinese COVID Policy:  In a Saturday press conference, government health officials said they will continue to enforce President Xi’s “dynamic Zero-COVID” policy, calling it “completely correct, most economical, and effective.”  Although the officials promised to continually refine the policy to minimize economic and social disruptions, the statement suggested that the Chinese economy and financial markets will continue to struggle with the economically painful policy.  However, reports based on insider accounts this morning indicate high-level officials are actually reconsidering the Zero-COVID policy but want to move slowly before abandoning it to limit any downside for public health and/or for the political position of the Communist Party.  The conflicting reports have whipsawed stock equity futures over the last day.

Chinese Finance Sector:  The Communist Party announced that Fan Yifei, one of the six deputy governors of the People’s Bank of China, has been detained as part of an investigation into “suspected serious violations of discipline and law.”  Fan, a former high-level officer at China Construction Bank (CICHY, $10.98), is the latest in a series of financial officials who have been arrested on corruption charges over the past two years.

United Kingdom:  When he releases his Autumn Statement at mid-month, Chancellor Hunt reportedly will call for tax increases and public spending cuts worth up to £54 billion per year to close the government’s yawning fiscal deficit.  Not only would the fiscal tightening reverse Former Prime Minister Truss’s plans, which sparked a massive selloff in U.K. government bonds, but it would also mark a return to growth-inhibiting austerity like that of the early 2010s.

U.S. Economy:  New polling suggests that almost three-quarters of U.S. consumers plan to seek less-expensive alternatives in this year’s holiday shopping season, driven largely by high inflation and concerns about an economic downturn.  The report is a reminder that the resilient labor market and continued high employment will not necessarily preclude a drop in consumer spending or a broader economic recession.  We continue to believe a recession is likely to begin in the next few quarters.

U.S. Elections:  Voters across the country will go to the polls tomorrow for mid-term elections in which all seats in the House of Representatives and one-third of the seats in the Senate will be contested.  The latest polling suggests that the summer swing of voting intentions toward the Democrats has now largely dissipated, raising the chance that the Republicans could take control of both chambers. 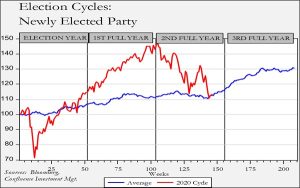