Good morning. Today’s Comment begins with our thoughts on the Federal Reserve’s rate decision. Next, we discuss how the Fed indirectly pressures other central banks to tighten their own policy. Finally, we explain how an international push away from globalization will likely impact U.S. firms.

The Fed Is Not Done: Bullish investors got whacked on Wednesday after Federal Reserve Chair Jerome Powell squashed pivot expectations.

The More, The Scarier: Monetary policymakers in other countries feel compelled to follow the Fed’s lead, whether they like it or not. 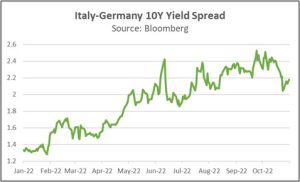 A Darker World:  Globalization may run out of steam as the governments become more hostile and demagogues gain influence.