Our Comment today opens with an update on the Russia-Ukraine war, where it appears that the Russian forces recently pushed out of the southern city of Kherson are now being redeployed to other parts of the front line and are digging in for a stronger defense.  We next review a wide range of other international and U.S. developments with the potential to affect the financial markets today, including a welcome upward revision to economists’ expectations for the Eurozone’s economy this winter.

Russia-Ukraine:  Now that the Ukrainian military has pushed the Russian occupiers out of the southern city of Kherson and its environs, various reports indicate that the Russians are redeploying their withdrawn forces to other fronts, with an emphasis on the northeastern Donbas region.  The latest news suggests that they are also prioritizing the building of new defensive lines to limit Ukraine’s ability to make further gains.  Meanwhile, the Russians continue to pummel Ukraine’s civilian infrastructure with air, missile, and kamikaze drone attacks.  As winter takes hold in Ukraine, we suspect that the Ukrainians will prioritize keeping the pressure on the Russian forces in order to complicate their efforts to reconstitute and regain their combat strength. 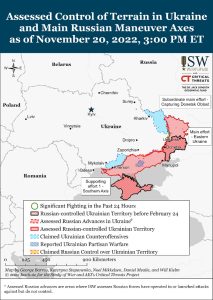 Eurozone:  Despite the continuing war in Ukraine, economists have recently boosted their forecasts for the Eurozone’s near-term economic growth and now believe its downturn this winter will be much milder than earlier thought.  Greater fiscal support from governments, lower gas prices, and a mild autumn have all helped to improve the bloc’s outlook, with many economists now expecting the Eurozone’s economic output to decline just 0.5% in the fourth quarter and 0.1% in the first quarter of 2023. 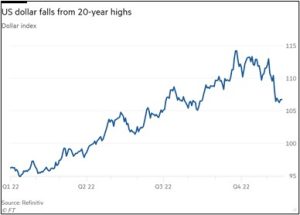 Turkey:  Over the weekend, in response to last week’s terrorist bombing in Istanbul, the Turkish military launched air strikes against Kurdish militant’s bases and other sites in Syria and Iraq.  The ministry also said it had destroyed 89 targets, including shelters and ammunition depots, and that senior members of the PKK “were among those neutralized.”  Such a large series of strikes raises the risk of new instability in the region.

China:  The broad new wave of COVID-19 infections continued unabated over the weekend, with daily new infections remaining above 24,000.  In addition, the country reported its first fatalities from the disease since late May.  Separately, Hong Kong’s chief executive has tested positive for COVID-19 just days after interacting with his boss, President Xi Jinping, at the Asia Pacific Economic Cooperation forum in Bangkok.  Xi is therefore at risk of coming down with the disease, increasing the likelihood that he will be in quarantine for some time after returning from his trip.

Indonesia:  An earthquake struck the island of Java early today, leaving at least 56 people dead, around 700 injured, and hundreds of buildings damaged.  The quake registered 5.6 on the Richter scale, making it a rather moderate temblor despite the damage and loss of life.

Democratic Republic of Congo:  Ethnic tensions have erupted into the most intense clashes in a decade, with the M23 rebel group advancing to within 12 miles of the city of Goma and pushing United Nations-backed Congolese government forces from several surrounding towns.  The advance raises the prospect that M23 and its foreign allies could dominate a region that produces important minerals, including tin, gold, tantalum, and coltan.

Colombia:  Even though recently inaugurated leftist President Gustavo Petro had pledged to stop new oil and gas exploration projects in Colombia, his finance minister signaled in a recent interview that the government will first review existing contracts to see if any modifications are necessary.  Stepping back from Petro’s plan to end Colombian fossil fuel exports could help buoy the economy and reverse a steep fall in the peso.

COP27 Climate Summit:  As the global summit conference to address climate change ended over the weekend, negotiators reached a deal in which large, rich, developed countries would set up a special fund to help the poorest less-developed countries manage the cost and damage of global warming.  In return, the developing countries agreed to support the current targeted cuts in global greenhouse gas emissions.  However, the size, structure, and mechanics of the fund were left to be hashed out sometime in the future.

U.S. Consumer Demand:  As the holiday shopping season kicks off in earnest this week, new data and polling suggest that headwinds such as high inflation and rising interest rates will push down spending on gifts this year.  The polling indicates that people will buy less presents and spend marginally less than they did on presents last year.

U.S. Energy Sector:  Although it now looks like Europe could skirt the big energy crisis it was previously expected to face this winter, the massive energy exports to Europe and other issues are pushing heating costs dramatically higher in the U.S. Northeast this winter.  The New England regional grid operator has said that it will be able to cope under normal weather conditions this winter but warned that a prolonged period of particularly cold temperatures could force it to ration electricity supply, potentially through rolling blackouts that could negatively affect the region’s economy.

U.S. Cryptocurrency Market:  As part of its bankruptcy process, crypto exchange FTX and its linked companies filed a list of their 50 largest creditors on Sunday, and the filing showed that all of those creditors were customers which are owed more than $20 million.  Two of those are due over $200 million.