Our Comment today opens with an update on the Russia-Ukraine war, including news that Russia has reversed its decision to stop participating in the UN-brokered deal which allows Ukraine to keep exporting grain out of its southern ports.  We next review a wide range of other international and U.S. developments with the potential to affect the financial markets today, including a call by U.S. Trade Representative Tai for an allied industrial policy against China and a preview of the Federal Reserve’s latest policy decision, due out this afternoon.

Russia-Ukraine:  As Ukrainian forces continue to press their counteroffensives in the northeastern Donbas region and in the southern region around Kherson, and as the Russians counterattack with air, missile, and kamikaze drone attacks on Ukraine’s civilian infrastructure, new reports suggest Russia is buying more drones and ballistic missiles from Iran to shore up its depleted inventory of such weapons.  The new purchases from Iran suggest Russia will continue its attacks on Ukraine’s civilian infrastructure in an effort to break the Ukrainians’ will to fight.

Global Economy:  Søren Skou, the chief executive of Danish shipping giant AP Møller-Maersk (AMKBY, $10.63), warned that “every” indicator his company uses to gauge future demand is flashing “dark red.”  According to Skou, the global economy is certainly sliding into recession, which is consistent with our view that the U.S. economy will likely begin contracting in the next few quarters.

Denmark:  In yesterday’s elections, center-left Prime Minister Frederiksen secured the bare minimum of 90 seats in parliament that is necessary for a majority.  However, such a slim majority may not be viable, so she also announced that her current government would resign, and she would focus on building a broad coalition including parties from both the left and the right.

Israel:  With about 84% of the vote counted following yesterday’s parliamentary elections, right-wing Former Prime Minister Netanyahu’s coalition is projected to get between 62 and 65 seats in the 120-seat Knesset.  The expected government would be one of the country’s most conservative and religious-oriented in history.  Meanwhile, center-left incumbent Prime Minister Lapid’s bloc is expected to come in second with about 54 seats.  However, the results could end up being different when the official count is finalized.

Colombia-Venezuela:  Yesterday, leftist Presidents Gustavo Petro and Nicolás Maduro held the first Colombia-Venezuela summit in six years, illustrating how new, leftist leaders in the region are willing to re-engage with Venezuela in defiance of the U.S.  The focus of the meeting reportedly was on bilateral trade and regional environmental protection policies.

North Korea-South Korea:  To protest U.S.-South Korean military exercises, North Korea today launched its biggest barrage of missiles in years.  The missiles were launched from at least eight locations on both the east and west coasts of North Korea, with at least one falling so close to a South Korean island that it triggered an air-raid siren.  In response, South Korea fired three air-to-ground missiles from warplanes into the sea north of the countries’ disputed border.

China:  Chinese stocks posted strong gains yesterday on rumors that the government has established a committee to look at loosening its disruptive, unpredictable Zero-COVID policies.  As we have argued previously, those policies have created a significant headwind for the Chinese economy and, by implication, the global economy.  However, it’s important to remember that even if the government loosened its Zero-COVID policies, the economy would still face a number of other challenges, from the government’s crackdown on various types of private enterprise to the U.S.’s imposition of trade and capital flows.

United States-China:  FCC Chairman Carr, in his strongest statement on the issue so far, has called for the Committee on Foreign Investment in the U.S. (CFIUS) to ban social media app TikTok from the U.S. market because of the way the Chinese-owned company collects information on its users.

United States-European Union:  In an interview with the Financial Times, U.S. Trade Representative Tai has offered an impassioned defense against EU complaints regarding the subsidies recently passed for U.S. technology and green-energy firms.  To defend the new U.S. subsidies, Tai argued that the U.S. and the EU should develop a coordinated industrial policy in which the EU also provides such support to its industries and reduces China’s role in them.

U.S. Monetary Policy:  Officials at the Federal Reserve wrap up their latest policymaking meeting today, with their decision due out at 2:00 pm ET.  The officials are widely expected to hike their benchmark fed funds interest rate by another 75 basis points, but investors are also hoping that they will signal more moderate rate hikes going forward out of fear that tighter monetary policy could send the U.S. economy into a sharp downturn.  Meanwhile, derivative markets suggest investors are now betting that the Fed policymakers will have to keep interest rates higher for longer before they finally bring inflation pressures down to acceptable levels.

U.S. Diesel Fuel Market:  Recent media reports have highlighted that U.S. diesel inventories are at a very low 21 days of consumption.  That’s consistent with a broader data set showing that overall inventories of “distillates” (diesel, jet fuel, heating oil, etc.) are unusually low, as shown in the chart below.  In addition, European energy shortages from the war in Ukraine have boosted U.S. distillate exports. 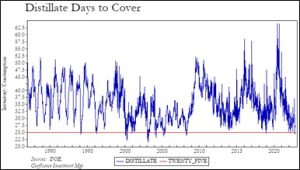