Our Comment today opens with an update on the Russia-Ukraine war, including a discussion of what comes next following Ukraine’s dramatic recapture of the southern city of Kherson late last week.  We next review a wide range of other international and U.S. developments with the potential to affect the financial markets today, much of which is focused on developments in China and in U.S.-China relations.

Russia-Ukraine:  Now that Russian forces have abandoned the southern Ukrainian region around Kherson, they appear to be redeploying their forces northward to launch new offensives in the province of Donetsk.  That will likely force the Ukrainians to reinforce their units in that area, but they are also expected to send some troops from Kherson northward to bolster their offensive in the northeastern Luhansk region.  In any event, it appears that Ukraine’s recapture of Kherson has set the stage for intensified fighting, rather than less fighting, in the coming months. 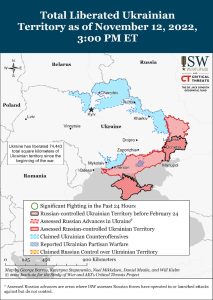 Turkey:  An apparent terrorist bombing in central Istanbul killed six people yesterday, prompting the government to vow vengeance on the Kurdish militants that it suspects planted the device.  Because of U.S. support for Kurdish rebels in Syria, the attack and any Turkish retaliation is likely to worsen U.S.-Turkish relations.  Potentially, that could mean that Turkey will become even less cooperative in supporting Ukraine as it tries to defend itself against Russia’s invasion.  It could also prompt Turkey to dig in its heels against Sweden and Finland joining NATO.

United Kingdom-France:  Today, negotiators from the U.K. and France struck a deal in which the U.K. will provide additional resources to France so it can halt additional migrants from illegally crossing the English Channel to the U.K.  The agreement is an early sign that Prime Minister Sunak’s government may be able to work more constructively with France and the rest of the EU than other recent Conservative governments.

China COVID Policy:  The Communist Party has ordered that the country’s Zero-COVID policy be “optimized and adjusted” to minimize its impact on economic growth, people’s lives, and foreigners’ ability to visit China.  Along with the news of easing inflation in the U.S., the announcement helped give a big boost to stocks in China and Hong Kong on Friday.

China Real Estate Policy:  In the country’s second major move to accelerate economic growth, the People’s Bank of China and the China Banking and Insurance Regulatory Commission released a broad support program for the real estate industry on Friday.  One of the biggest policy changes in the notice is to allow a “temporary” easing of restrictions on bank lending to real estate developers.  In addition, developers’ outstanding bank loans and trust borrowings due within the next six months could be extended for a year, while repayment on their bonds may also be extended or swapped through negotiations.  To reduce the risk of popular unrest over developers’ failure to deliver finished homes after buyers made down payments, the new policy also calls on banks to negotiate with homebuyers on extending mortgage repayment and emphasized that buyers’ credit scores should be protected.

United States-China:  President Biden and Chinese President Xi held their first in-person meeting as national leaders today on the sidelines of the Group of 20 summit in Indonesia.  According to U.S. National Security Advisor Sullivan, Biden used the occasion to warn China about U.S. red lines as the two countries’ rivalry intensifies.  He also suggested that Xi should help rein in North Korea’s belligerent nuclear missile program.

U.S. Mid-Term Elections:  Based on updated vote tallies released over the weekend, Nevada Senator Catherine Cortez Masto now appears to have won re-election, ensuring the Democratic Party will retain control of the upper house of Congress with Vice President Harris’s tie-breaking vote.  If the Democrats win Georgia’s senatorial run-off vote on December 6, they will improve their position in the Senate to an outright majority of 51-49.

U.S. Monetary Policy:   At an event in Australia today, Federal Reserve board member Christopher Waller warned that investors shouldn’t be lulled by last week’s report showing cooler inflation.  According to Waller, the monetary policymakers “have a ways to go yet” to boost interest rates high enough to get inflation truly under control.  The statement should be a reminder that the Fed is still desperately keen to rebuild its inflation-fighting credentials, so it is likely to keep raising interest rates in the near term even if doing so pushes the economy into recession, as we expect.

U.S. Economy:  The freight unit of FedEx (FDX, $175.61) said it is furloughing some workers in select U.S. markets in response to slowing demand.  Since transportation services can often be a bellwether for the overall economy, the action provides concrete evidence that U.S. economic activity is slowing sharply, consistent with our view that it will slip into recession sometime in the first half of 2023.