Today’s Comment opens with key U.S. developments that could have an impact on the financial markets today, including news of a new government crackdown on crime at big companies.  We next cover a range of international news, including the appointment of a new Japanese foreign minister who is surprisingly soft on China.  We close with the latest news on the coronavirus pandemic.

U.S. Regulatory Policy:  An official at the Justice Department yesterday warned that the administration would launch a crackdown on corporate crime in the coming weeks, with a focus on companies that have violated past deferred prosecution agreements or have failed to invest in legal compliance systems.  The official warned that the crackdown, which is separate from the administration’s intent to ramp up antitrust enforcement, would touch some of the biggest U.S. companies.  The statement highlights our concern that U.S. firms are likely facing much greater regulatory risks than they have in many years.

U.S. Bond Market:  A federal working group looking into the U.S. Treasury market’s recent liquidity problems issued a progress report but was criticized for failing to go beyond familiar solutions such as increased transparency and oversight and central clearing.  The report also stopped short of making any policy recommendations and did not suggest a timeline for the working group’s analysis to be completed.

U.S. Inflation:  Yet another basic commodity is getting attention for its rapid price increases.  Prices for ethanol, the corn-based fuel that is a common additive to gasoline, have risen about 50% year to date, with the near-term contract trading at about $2.20 a gallon on the Chicago Board of Trade.  The jump comes as demand rebounds strongly from the coronavirus pandemic, and supply remains constrained.

Belarus-European Union:  As troops and border guards pushed back thousands of primarily Middle Eastern migrants trying to enter Poland from Belarus, the EU accused Belarussian President Lukashenko of acting like a “gangster” in instigating the crisis.  EU officials believe Lukashenko orchestrated the mass migration push to punish the EU for the sanctions it has imposed on Belarus for its political repression.

Japan-China:  Japan’s new prime minister, Fumio Kishida, has appointed a foreign minister who is unexpectedly dovish on China.  The new foreign minister will be Yoshimasa Hayashi, a Harvard-educated, English-speaking official, who previously served as both minister of defense and minister of education.  Like Kishida, he is also a member of the ruling party’s most liberal and pacifist faction, suggesting that Kishida has been emboldened by his party’s win in the late October parliamentary elections.  Therefore, he may feel less need to bend to the conservative factions in the party.  All the same, the conservatives remain dominant in the party and will probably pressure Hayashi to maintain a tough stance on China and continue bolstering Japan’s alliance with the U.S.

China-Taiwan:  In its biannual military strategy report, Taiwan’s defense department said it would try to deter China from taking the island by force primarily by adopting “asymmetric” tactics like sinking China’s large amphibious landing ships with multitudes of small, cheap, fast attack boats.  The strategy calls for inflicting maximum damage on any Chinese invasion force while its troops are embarking on their ships or airplanes and when they are crossing the Taiwan Strait, the times they would be most vulnerable. 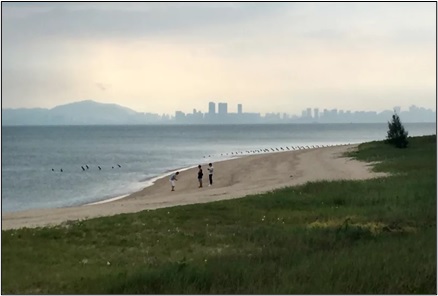 A view of the Chinese city of Xiamen, Fujian Province, from the Taiwanese island of Kinmen (Source: NPR).

China:  The October Producer Price Index was up a whopping 13.5% year-over-year, far worse than both the expected increase and the rise in the year through September.  The gain in October was the biggest since 1995.  The country’s statistics bureau ascribed the price jump mostly to higher costs for domestic energy and raw materials.  Even though the government can keep a tight lid on China’s consumer prices (the Consumer Price Index was up just 1.5% year-over-year), the big hike in basic materials will surely feed into concerns about higher production costs in China boosting inflation in other countries. 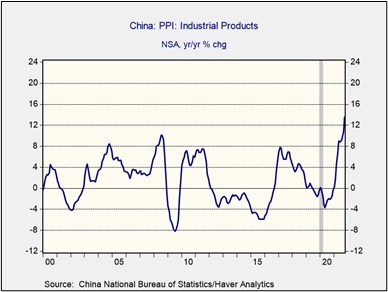 India:  An acute shortage of fertilizers is threatening to disrupt the winter planting season, stoking unrest among the country’s politically important farmers ahead of a series of crucial state elections next year.