Good morning.  Risk markets are mostly moving higher this morning.  Our coverage focuses on central banks this morning.  The Bank of England was unexpectedly dovish while the Fed is moving to taper.  We look at the impact.  Our regular coverage begins with economics and policy.  Budget talks continue, and the labor markets continue to confound.  China news is next; the food directive remains a puzzle.  The international roundup follows, and we close with our regular pandemic update.

BREAKING:  The Bank of England leaves policy unchanged in the face of rising inflation.  Markets had been leaning toward at least a signal of accommodation removal.  The GBP has fallen hard on the report.

FOMC meeting:  The FOMC announced it would begin reducing the pace of its balance sheet expansion beginning this month by $15 billion per month in November and December and then reassess its position.  The general expectation is that the FOMC will continue at this pace unless (a) strong growth and inflation worries require a faster drawdown or (b) slower economic growth or slower inflation requires a slower drawdown or re-expansion.  In the press conference, the first question was, “is the market wrong to be projecting rate hikes?”  It was a good question, and Powell, showing he has learned how to speak like a Fed Chair, responded but didn’t answer the question.

Our read is that the market has built in 50 bps of rate hikes over the next two years. 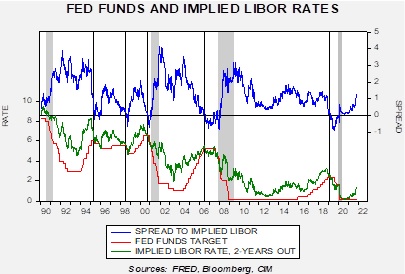 The rise in the implied rate of the two-year Eurodollar futures has increased rapidly in the past month.  This level is consistent with 50 bps of tightening.  It should be noted that in 2014 when this level was reached, it took about a year before the first rate hike. Thus, the market seems to be discounting a rate hike by this time next year.

When (if?) policy rates begin to rise, the real test begins.  We have avoided a “taper tantrum” this time because Powell has been able to separate balance sheet policy from interest rate policy.  Essentially, the FOMC is using tapering as its answer to the inflation issue.  If inflation turns out to be “transitory” and begins to fall next year, then Powell will have been vindicated for moving slowly to pull stimulus.  To a great extent, the equity markets, which as we note below, took the taper news quite well, depend on liquidity flowing to stocks and not on real goods and services.

There are two other issues that emanate from yesterday’s decision.  The first is whether this action changes the renomination decision.  The president has indicated that a decision will be coming “fairly quickly.”  We would argue that he is already late.  We suspect Powell would have likely preferred to have waited, but the FOMC was dead set on moving.  Powell’s strongest critics are on the left, but most of the left-wing economists we read are generally supportive of the chair; populist left-wing politicians are less supportive.  But, if there is anyone with any market sensitivity in the White House, yesterday’s market action was exactly what the president should want—there was only a modest rise in long-term interest rates, equity prices rallied, and commodity prices fell.  This morning, we are seeing a rebound in oil and gold, but nothing close to new highs.  That is a good outcome, and Biden should support that.  We think that if Powell is rejected, the financial markets won’t be pleased.

The second issue is the economic impact of tapering.  In general, the history of QE episodes shows the impact of QE has been mixed.  In some previous episodes, ending QE led to lower long-term interest rates.  Our focus is the impact on the money supply. 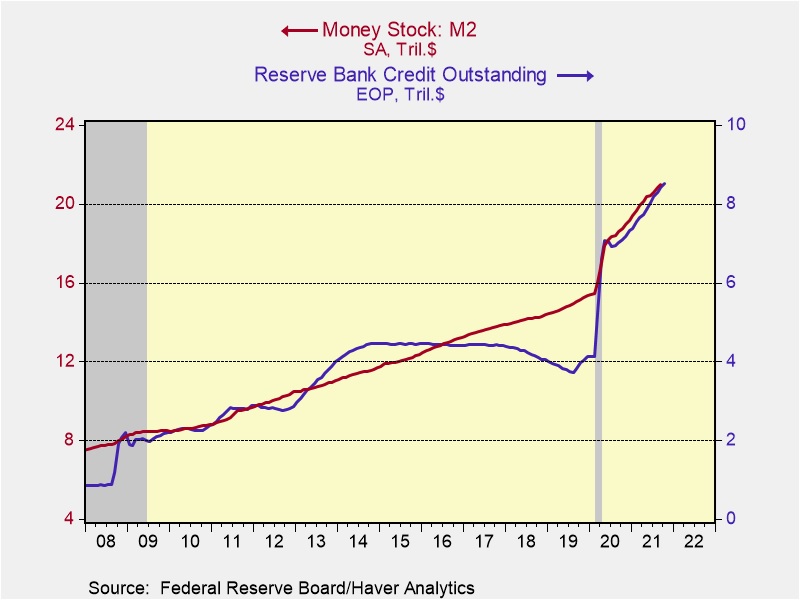 As this chart shows, the relationship between the balance sheet and M2 is mixed.  For example, during the expansion of the balance sheet in 2013, M2 and the balance sheet moved together.  M2 continued to trend higher, mostly unaffected during tapering and QT.  However, in the latest episode, M2 has risen in concert with the balance sheet, raising concerns that tapering will slow money growth.  If lending increases, tapering won’t be a big deal, but if M2 tracks lower because of tapering, it may reduce liquidity and potentially be negative for financial markets.  This is a risk we will monitor closely in the coming months.

To sum up, the Fed’s nightmare is the Tinbergen problem.  Jan Tinbergen, who won the first Economics Nobel prize, postulated that policymakers need an equal number of policy tools for the number of policy problems.  Trouble comes if a policymaker, for example, has one tool but two problems.  Stagflation is the worst of all outcomes because the FOMC must choose whether it will attack inflation or slow growth.  Although Q3 GDP was sluggish, the current Atlanta FRB GDPNow projection is for 8.2% growth in Q4.  We expect that estimate will come down, but it suggests Q3’s weak growth was probably an aberration.  Yesterday’s ISM Service report is consistent with that position.  The most likely trend for policy is to tighten, but we expect the pace of tightening to be slow, mostly because the labor markets are not close to full recovery… with the caveat that the pandemic has played havoc on the labor markets and thus it is hard to determine if what appears to be the lack of recovery is really a permanent change.

China news:  The uncertainty surrounding the food directive continues, and China is expanding its nuclear capability.

International roundup:  The fish fight is calming down, and Ethiopia is spiraling into civil war.

COVID-19:  The number of reported cases is 248,243,646, with 5,024,725 fatalities.  In the U.S., there are 46,253,861 confirmed cases with 750,431 deaths.  For illustration purposes, the FT has created an interactive chart that allows one to compare cases across nations using similar scaling metrics.  The FT has also issued an economic tracker that looks across countries with high-frequency data on various factors.  The CDC reports that 525,071,855 doses of the vaccine have been distributed, with 425,272,828 doses injected.  The number receiving at least one dose is 222,268,786, while the number receiving second doses, which would grant the highest level of immunity, is 192,931,486.  For the population older than 18, 69.8% of the population has been vaccinated.  The FT has a page on global vaccine distribution.  The weekly Axios map shows continued improvement, although some states are seeing a resurgence, especially in the southwest.