[Posted: 9:30 AM EDT] Happy Monday as we clear out the “tequila cobwebs” this morning!  Cyclone Fani made landfall over the weekend.[1]  Ramadan begins.[2]  Trade turmoil returns.  It’s a massive risk-off day so far.  Here is what we are watching:

Trade turmoil: On Sunday afternoon, President Trump tweeted that, due to the slow progress of trade talks and reports that China was backtracking on some earlier agreements, he would increase the scale and scope of tariffs by Friday.[3]  There has been a steady drumbeat of reports that President Trump was pressing his trade negotiators to make a deal;[4] it appears that his mood has changed.  It is unclear what triggered the change.  We have doubted that USTR Lighthizer would agree to a modest agreement, although Treasury Secretary Mnuchin has been seen as pushing for a less comprehensive deal.  Perhaps the recent upturn in the economy emboldened the president or China may have crossed some sort of red line.  At the same time, economic conditions in China have improved, which may have led Chinese negotiators to push back on some issues that appeared previously resolved.  And, it’s quite possible the Chinese, again, misread President Trump and believed his desire for a deal would allow them to press for a more favorable agreement.  China did announce cuts on reserve requirements for small business loans.[5]  At the same time, in what might signal concern in the Xi government, China has lowered the daily limit on foreign currency withdrawals.[6]  If there is a trade war, one would expect Chinese households to accumulate dollars on fears of CNY depreciation.  The move by the PBOC to limit withdrawals could be in anticipation of rising concerns.

China has indicated it may cancel this week’s scheduled meetings in Washington, which were expected to start on Wednesday.  It has backed away[7] from fully cancelling the meeting but may not send Vice Chair Liu[8] or could delay his arrival, which would almost certainly mean Trump’s tariffs will go into effect.

Financial markets reacted as one would expect.  Equities around the world plunged.[9]  The yen and dollar rallied and Treasury yields dipped.  Most importantly, the CNY nosedived; it is possible that Beijing prevented the CNY from depreciating during trade negotiations.  But, it should be noted that the textbook response to tariffs is depreciation.  Gold lifted, but industrial metals fell.  Another key market move occurred in grains.  Even though the Midwest continues to deal with unrelenting rain, which is slowing planting progress and potentially constraining supply, grain prices fell hard on the prospects of a trade disruption.

Financial markets have mostly expected a deal to be made and for disruption to be avoided.  The president’s policy reversal is important; we will be watching to see if there has been a significant rupture in relations or if the president is simply posturing.  In other words, what we don’t know the answer to is if this is a bargaining tactic or an ultimatum.  If it’s the former, financial markets will reverse today’s losses.  If it’s the latter, a more serious pullback is in the offing.  At this point, we don’t have much confidence in either outcome.  It is possible President Trump is overly confident in the ability of the U.S. economy to overcome tariffs on China; the same overconfidence may be occurring in Beijing, too.  Therefore, a mistake could be made.  It is also possible that the president believes being tough on China will play well with his voters and that a trade war is a plus so long as recession is avoided.  What we are concerned about, as noted above, is that financial markets have generally moved on from worrying about this issue and thus will need to recalibrate.

There have been a number of questions into our office about the impact of tariffs.  In general, the best answer is “it depends.”  At one extreme, the Chinese exporter cuts his price by the amount of the tariff and absorbs the tax (this is where currency depreciation helps); at the other, the tax simply passes through to the consumer.[10]  So far, most studies have suggested that the incidence from metals tariffs have been borne by U.S. consumers.  But, that might not be the case if tariffs broaden.

Iran: The U.S. is considering sanctions on other Iranian industries, although they have not been officially specified yet.[11]  John Bolton, the National Security director, issued a press release indicating the U.S. was sending the CVN Abraham Lincoln to the Middle East.[12]  He tied the move to increased tensions with Iran.[13]  We do note that the carrier group has been in the area for a while (it’s currently in the Red Sea), so the announcement does appear to be stating what was already in place.  In some respects, this carrier group in the region isn’t a big deal.  The U.S. often has a carrier group in the Fifth Fleet’s area of operations; recently, it has had a lower presence in the region.  If the U.S. was preparing for a conflict, it would have a minimum of two carrier strike groups and would prefer three, which would support 24-hour sorties.  Meanwhile, the EU is continuing to support the Iran nuclear deal,[14] although business dealings with Iran have declined precipitously.  Even with this news, we are seeing lower oil prices today.  Oil has been trading as a risk asset, so lower equities are weighing on oil prices.

Gold: Although you wouldn’t necessarily notice it in terms of price, central banks have been increasing their gold reserves.  Last quarter, central banks boosted their holdings by 145.5 tons over the same quarter a year ago.[15]  Russia led the buying, likely in a bid to circumvent sanctions.

North Korea: As relations deteriorate, Pyongyang is returning to its old patterns of provocative actions.  On Saturday, the regime launched a number of “projectiles” offshore.  It is believed these were short-range missiles.[16]  So far, the Trump administration has acted with restraint to these events, likely because they don’t include ICBM tests, which would directly threaten the lower 48.[17]  We doubt Kim’s missile tests are sitting well with the hawks in the administration, namely Pompeo and Bolton.  But, as long as Kim doesn’t test a missile that could hit the U.S., he will likely avoid a significant breakdown with Washington.  To a great extent, Kim wants attention[18] and these short-range tests give him that without significant cost.

The Fed: With Herman Cain and Stephen Moore out of the picture, the administration returns to looking for two more candidates.  Two names have emerged, Paul Winfree[19] and Judy Shelton.[20]  Winfree’s economic work appears to be in fiscal policy, while Shelton seems to be a gold supporter.  Winfree did complete an MA in economics; Shelton has a Ph.D. in management.  What we find interesting is that Trump seems to really want a policy dove, but what he keeps getting are hard money types who promise to do the president’s bidding.  But, once seated, will they keep their promise or will their hard money instincts kick in, especially since it’s hard to remove a sitting Fed governor?

Infrastructure?  Forget it!  The Congressional GOP has no interest.[24]

Elections: South Africa goes to the polls this week.  Corruption appears to be the biggest issue.[25]  Although the ANC is expected to maintain control, the margin of victory is likely to be less than the last election.  Meanwhile, in North Macedonia, the incumbent party maintained power.[26]

Brexit: Although it’s still a long shot, there does appear to be some progress in building a cross-party coalition for a customs union with the EU.[27]  However, while the leadership is close to an agreement, the backbenchers on both parties will likely howl and still scotch an agreement.  And, it should be noted that the next PM could pull the U.K. out of the customs union anyway.  Thus, we may see a bounce in British assets if an agreement is struck on a customs union, but it may not have legs.

The 2020 elections: We are starting to get questions about the 2020 elections, especially given the large number of candidates vying for the Democratic Party nomination.  We are not handicapping anything currently.  And, to profile why we aren’t, try this quiz. 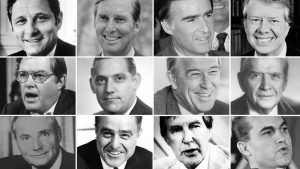 The point of this test is that a crowded field signals a high level of political turmoil, so much so that a plethora of candidates are willing to take the plunge (the winner was Jimmy Carter, top right).  As the 2016 GOP primary showed, as did the 1976 primary, it’s anybody’s guess who will win.  We are watching what is going on but, at this point, picking the Democrat from a field of 22 is an exercise in being wrong.  After all, few pundits thought Trump would win in 2016 and Jimmy Carter wasn’t considered a strong candidate in 1976 either.  Simply put, it’s too early to handicap the outcome and it probably isn’t affecting markets yet anyway.