[Posted: 9:30 AM EDT] It’s employment day!  We cover the data in detail below.  The report was mostly strong, although wage growth continues to disappoint.

On Sunday, the French go to the polls for a runoff election between Emmanuel Macron and Marine Le Pen.  The latest polls show Macron leading 62% to 38%.  Although we don’t want to call the election prematurely, a Le Pen win would be an historic outlier.  As we noted last week, the current spread is roughly where Truman/Dewey stood about five weeks before the election.  However, at the time of the election, the spread had narrowed to about 5%.  Truman’s win was still a stunner but the polls were going his way into the election.  Le Pen has not seen any surge in support; in fact, she peaked around 41% last week and has now fallen to 38%.  Overall, she commands about 40% of the electorate and probably won’t improve beyond that.  Thus, we expect Macron to be the next president of France.

We do note that the French president isn’t all that powerful; a good way of thinking about the French system of government is that it is a combination of the American presidential system and the European parliamentary system.  The president does have great authority in foreign policy but domestic policy power really resides with the prime minister who is approved by the legislature.  Normally, the president is the leader of a major party that also controls the legislature.  Thus, the PM is usually seen as an agent of the president.  However, on occasion, the president will represent a different party than the PM, a condition called “co-habitation.”  Such governments tend to be unstable.  The president can dissolve the Assembly and trigger new elections, but this avenue probably isn’t available to Macron if he gets stuck with a legislature he doesn’t like since he has no party.  Parliamentary elections will be held next month and Macron will have a PM thrust upon him, most likely from the center-right, as he has no real party apparatus.  This condition probably means that Macron will be a weak leader and current policies in France will remain in place…and since those policies aren’t all that popular, the likelihood of a continued populist backlash is high.

Yesterday, the House did narrowly pass the AHCA bill.  Although this is being celebrated with great relish by the House leadership and the president, the Senate has already made it abundantly clear that nothing on this is going to happen quickly.  First, Senate leaders are indicating that they will write their own version of the bill and not use the House version as a starting point.  That surely means reconciliation will be almost impossible.  Second, McConnell has indicated he will wait for the CBO to score the bill.  The House moved before the bill was scored, most likely because it feared the CBO would indicate a sharp rise in the uninsured.  Although there are some political analysts suggesting that the House may be in play after this vote, it still seems like a long shot.  Using the Cook Political Report[1] analysis, the categories of “Likely” Republican and “Lean” Republican bring in 234 seats, a 16-seat majority.  Cook did shift 14 seats from Likely to Lean for Republicans after the report,[2] and three into the “Toss-Up” category, suggesting the vote does increase the risk of a turnover in the House.  However, at this juncture, it’s still a long shot for the Democrats to take control.  If the Senate bogs down the process, the potential negative impact of the vote is probably lessened.  Still, for the financial markets, the fact that something was accomplished may boost hopes that tax reform, or at least cuts, could be possible.

Oil prices have come under pressure, dipping under $45 per barrel for WTI on a few occasions overnight.  We view $45 as psychological support, so some consolidation at this level is possible.  As we have been noting for weeks (including yesterday), oil prices have been quite rich relative to oil inventories and the dollar.  Some degree of correction was likely.  On the other hand, the Saudis remain committed to propping up prices so they should be willing to cede market share to other producers, including the U.S. 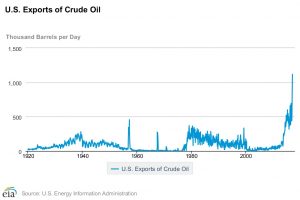 This chart shows U.S. crude oil exports.  Although the U.S. banned oil exports in 1975, an exception for Canada was made to facilitate smooth refinery operations.  Note the spike in exports seen since the ban on exports was lifted in January 2016.  Rising U.S. oil production and exports pits American producers against OPEC + Russia.  It will be interesting to see how long the cartel will tolerate the loss of market share from U.S. production.