[Posted: 9:30 AM EDT] Oil prices moved higher overnight on the Canadian oil sands wildfire and escalation of fighting in Libya, both leading to speculation of supply contraction.  The Fort McMurray oil sands wildfire has spread to five times its initial size, leading to the evacuation of the entire town of more than 80,000 residents.  Fort McMurray is the main city in Canada’s oil sands region.  Separately, escalating tensions in Libya could cause short-term disruptions in production.  While the market is generally over-supplied, prices are becoming more sensitive to supply disturbances.  The chart below shows the year-to-date Brent crude price chart.

Yesterday, the March factory orders report was released, which came in stronger than forecast, rising 1.1% monthly compared to the 0.6% increase expected.  Durable goods orders came in on forecast, rising 0.8% from the month before.  Despite the monthly increases, the annual data revealed some weakness in both durable and non-durable production.  Total new factory orders fell 2.8% annually.  New orders for non-durables fell 5.8%, while durables fell 2.6%.  As the chart below shows, new orders have not been able to recover recently.  Weak global demand and the stronger dollar are the two main reasons for the weakness. 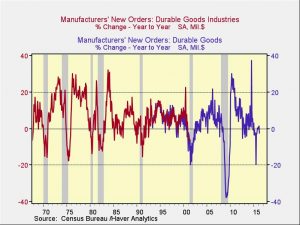 At the same time, non-defense capital goods excluding aircraft shipments rose 0.5% in March.  This measure is called core shipments and is a good proxy for capital spending in the business investment component of the GDP report.  However, the March increase follows a decline of 1.4% in January and a decline of 1.8% in February, which will likely lead to a decline for the quarter.  Additionally, weak demand maintained the inventory/shipments ratio at the highest level since 2009.

The dollar remains strong but, as the chart below indicates, has actually weakened since the beginning of the year.  This may ease some of the pressures felt by the manufacturing sector.