Our Comment today opens with an update on the Russia-Ukraine war, where Russian forces continue to make progress toward their scaled-down goal of seizing all of Ukraine’s eastern Donbas region.  In other major news regarding the war, the European Union has finally agreed on a partial ban on Russian oil imports, helping drive up global oil prices so far this morning.  We next review a range of international and U.S. developments with the potential to affect the financial markets today.  We wrap up with the latest news on the coronavirus pandemic.

Russia-Ukraine:  Russian forces continue to capitalize on their superiority in the quantity of equipment and manpower available to pour into the fight, especially now that they are concentrating their efforts on seizing territory in the Donbas region of eastern Ukraine.  The Russian superiority in equipment and personnel quantities has allowed them to seize more of the city of Severodonetsk, despite their continued losses of junior officers and rank-and-file soldiers.  The Russians are also regrouping near Izyum to renew offensives towards Slovyansk and Barvinkove.  It now appears more likely that Russia will eventually achieve its scaled-down goal of controlling all the Ukrainian provinces of Luhansk and Donetsk.  Meanwhile, we continue to see growing domestic dissent within Russian military circles, claiming that the Kremlin is not doing enough to win the war. 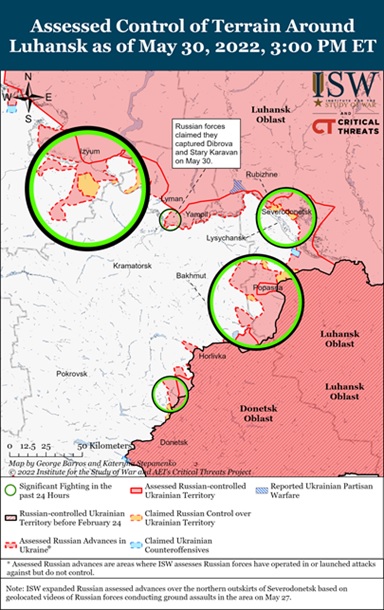 Eurozone Inflation:  As shown in the data tables below, the Eurozone’s May Consumer Price Index (CPI) was up a record 8.1% from the same month one year earlier, far above both the expected inflation rate of 7.7% and the April rate of 7.4%.  Excluding the volatile food and energy components, the zone’s May Core CPI was up a worse-than-expected 3.8% compared with 3.4% in the year to April.

China-South Pacific:  A summit of South Pacific island nations yesterday deferred a decision on endorsing China’s proposed “China-Pacific Island Countries Common Development Vision,” at least temporarily setting back China’s effort to bring those countries under its influence.  While some South Pacific nations have been open to China’s overtures (including the Solomon Islands, which has just signed a new security agreement with Beijing), others remain wary of Chinese influence and are concerned that China is not working hard enough to limit global warming, which is a major threat to their low-lying territories.

Israel-United Arab Emirates:  The governments of Israel and the UAE signed a free-trade agreement today, boosting business ties less than two years after they established formal diplomatic relations in a U.S.-brokered deal.  The deal will cut tariffs and otherwise loosen restrictions on some 96% of trade between the two countries.

Colombia:  Leftist former guerilla Gustavo Petro won the first round of Colombia’s presidential election on Sunday with 40.3% of the vote, followed by populist right-wing real estate tycoon Rodolfo Hernández with 28.1%.  The two will now compete in a June 19 run-off election.

U.S. Monetary Policy:  The White House announced that President Biden will meet today with Federal Reserve Chair Powell to discuss the state of the U.S. and global economies.  The president has pledged not to try to influence Fed policy, but he has broadly supported the Fed’s plans to withdraw stimulus and fight inflation.

U.S. Fiscal Policy:  Senate Majority Leader Schumer and Sen. Joe Manchin are reportedly nearing a deal to advance some elements of President Biden’s stalled economic program.  While the details remain closely held, some Democrats and outside analysts now expect a possible agreement could raise roughly $1 trillion in revenue and spend about $500 billion over a decade.

COVID-19:  Official data show confirmed cases have risen to  529,459,106 worldwide, with 6,289,228 deaths.  The countries currently reporting the highest rates of new infections include the U.S., Taiwan, Germany, and Australia.  (For an interactive chart that allows you to compare cases and deaths among countries, scaled by population, click here.)  In the U.S., confirmed cases have risen to 84,012,408, with 1,004,760 deaths.  In data on the U.S. vaccination program, the number of people considered fully vaccinated now totals 221,190,484, equal to 66.6% of the total population.