[Posted: 9:30 AM EDT] It’s employment Friday!  We cover the data in detail below, but the quick take is that it was a blowout report.  Payrolls were well above forecast and the unemployment rate fell to its lowest level since December 1969.  Here is what we are watching:

Moore out: Stephen Moore is no longer in the running for a Fed governor seat.  The official line is that he withdrew.[1]  Moore has made a number of controversial statements that ended up dooming his chances.[2]  To some extent, the president is pressing the boundaries of who he can nominate for these positions.  What lesson may have been learned?  Try to meet your goal with candidates that are less divisive.  We still think Larry Kudlow will be the next to be “run up the flagpole.”  His views are similar to Moore’s but Larry has the reputation of being a genuinely nice guy.[3]  The president could also appoint a committed dove to the FOMC, such as Minneapolis FRB President Kashkari or St. Louis FRB President Bullard, and get the same policy outcome without the controversy.  If the president continues to seek out difficult candidates, it suggests he sees some value in the battle and is less concerned about getting doves for the last two open spots.

European inflation: Eurozone inflation rose more than forecast, up 1.7%, which was good news, although the data may have been distorted by the late Easter holiday.  Core CPI also rose.[4] 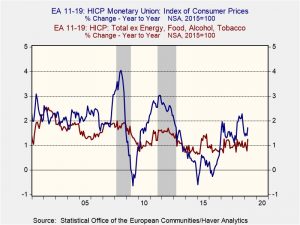 Low inflation has weakened the ECB’s ability to stimulate the economy through rate cuts, so the central bank will welcome this rise.

U.K. local elections: As expected, the Tories took a beating in local council elections.[5]  Interestingly enough, so did Labour.  The Liberal-Democrats, a center-left party, had the best showing.  These elections have the tenor of a protest vote, which probably means they don’t really tell us much about the path of national politics.

Politics and money: A couple of articles caught our attention.  First, Silicon Valley is finding the flow of cash impeded a bit by the Treasury department, which is vetting inflows from China and Saudi Arabia.[6]  Second, the Chamber of Commerce, a bastion of the GOP establishment, is finding itself on the outs with the White House.[7]  As the GOP becomes more populist, establishment bodies, like the Chamber and the Koch brothers’ Americans for Prosperity, have seen their influence wane.

A German at the ECB?  Jens Weidmann has been a controversial candidate for the ECB.  His nationality is an issue; the rest of Europe, but especially the southern nations, are worried that a German at the helm will turn the ECB into the Bundesbank.  In addition, Weidmann has been a critic of the extraordinary measures adopted by Draghi.  Over the past couple of years his star has risen and fallen, but it appears the Merkel government is pushing for Weidmann to get the nod.  Today, European Commission President Juncker, who is near the end of his term, has signaled he would support Weidmann.[8]  We would expect a more hawkish bank if Weidmann does become ECB president, which would be bullish for the EUR.

Japan and consumption taxes:Japan used an investment-led development model after WWII.  The model generated domestic saving by suppressing household consumption.  Part of that effort was national consumption taxes.  This method of taxation was appropriate for Japan’s development period, but that ended in 1990 and the inability to adapt to the post-development era has led to over three decades of economic stagnation.  The Abe government has been proposing to increase the consumption tax to 10% from 8% to address a huge fiscal deficit.  However, it has delayed the move twice due to economic conditions, once in 2014 and again in 2016.  Policymakers are indicating they will raise rates this year.[9]  In the past, such increases have undermined Japan’s growth; we would expect a negative reaction again if the country makes good on an increase this year.

[3] A couple of observations.  First, (Bill speaking here) I have been interviewed by Larry Kudlow on CNBC.  Although I don’t necessarily share his views on the economy, he was a fair questioner and allowed my viewpoints to be expressed.  Second, he usually goes on Bloomberg with Jonathan Ferro after the labor or GDP data are released.  While they do spar, it is done with respect and Kudlow goes to great lengths to make his point but in a fair manner.