[Posted: 9:30 AM EDT] It’s another quiet day in world markets, but the FOMC does conclude its meeting today and is widely expected to make no moves.  The item of interest will be the statement.  We expect it to acknowledge the recent slowdown, but we expect the weakness to be attributed to seasonal factors.  The Fed may not raise rates in June, but they won’t want to remove the possibility in today’s statement.  Although the FOMC did make strong efforts to prepare the financial markets for hikes in 2015 and 2016, the March increase was not signaled at the January meeting so the “teeing up” process may be becoming less of an issue.  Thus, a neutral statement does not necessarily mean that a rate hike won’t occur in June.  The area of greatest uncertainty will be any comments about the balance sheet.  We don’t expect too much to be said here, although we have less confidence in that prediction.  In other words, if there is going to be a surprise stemming from today’s meeting, it will likely come from discussions about normalizing the balance sheet.

Current expectations from fed funds futures put the likelihood of no change today at 87.7%.  The odds of a 25 bps hike in June are at 62.8% and have been rising over the past month.  Meanwhile, Eurodollar futures are still projecting a terminal rate of 1.75% for fed funds, well below the 3.00% projected by the dots plot.

This chart shows the implied three-month LIBOR rate from the Eurodollar futures market.  Based on the normal relationship between the three-month LIBOR rate and fed funds, we can say the futures markets have discounted a fed funds rate at the above forecast level in two years.  It is worth noting how rate projections jumped with the November elections.  If the Trump agenda fails to materialize, we could see this projected rate decline.

Auto sales have eased and are consolidating around the 17.5 mm unit level. 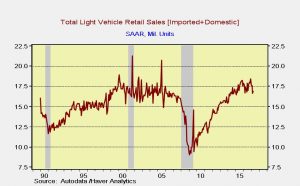 The 17.5 mm unit annualized level seems to be a peak in the data.  By itself, we are not overly concerned about auto sales.  The recovery since the Great Financial Crisis was likely to peak somewhere just above the 17.5 mm unit level and that is exactly what has occurred.  We see no major danger for the economy as long as sales remain above the 15.5 mm level.

However, one issue that does concern us is that automakers may have overestimated further growth as inventories are ballooning. 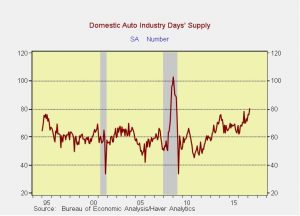 This chart shows inventory levels divided by sales times the number of selling days in a month.  We are currently exceeding 80 days of car sales on deal lots, well in excess of the long-term average of 61 days.  This inventory overhang is mostly dealt with in two ways; production cuts and price reductions.  The industry loathes to reduce prices because it signals to future buyers that they should wait for “deals.”  On the other hand, temporary plant closures can be costly.  Shutting down production lines and restarting them isn’t frictionless.  However, each summer, the auto industry traditionally slows production to prepare for the upcoming model year.  We would expect the shutdowns this summer to last longer than usual in an attempt to deal with excessive inventories.  We would also not be surprised to see the industry couple the summer shutdowns with more aggressive prices.  Thus, this summer, we could see a jump in initial claims as automakers lay off more workers to adjust inventory levels.  The BLS does attempt to account for this usual increase in claims in its seasonal adjustment process but these adjustments can be overwhelmed if the claims are higher than normal.