[Posted: 9:30 AM EDT] Good morning!  Risk-off is dominating the financial markets this morning.  Here is what we are watching:

Global bonds: U.S. 10-year Treasury yields are falling toward the 2.20% level and yields around the developed world continue to spin lower.  Although most economic indicators continue to signal slowing but positive growth, the behavior of the interest rate markets are sending warning signs of potential recession. 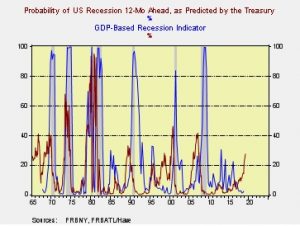 The European Commission presidency: The process now turns to selecting a president for the European Commission (EC), the position currently held by Jean-Claude Juncker, who is leaving office.  The appointment of the president of this body is a complicated process; essentially, this person must be (a) considered a leader of the EU Parliament, thus an important, known figure, officially called a Spitzenkandidat, and (b) acceptable to the leaders of the EU countries.  In terms of condition (b), not all nations are equal so, in practice, the EC president must be acceptable to Germany and France.  Going into the election, Manfred Weber, Merkel’s favorite, was considered the front runner.  Given that Weber’s EPP won the largest share of the vote, he has a claim to the job.  However, while he may have passed requirement (a), requirement (b) is becoming a problem because French President Macron is objecting to Weber’s appointment.  Instead, Macron, along with other leaders in the EU, are pushing other candidates.  Complicating matters for Merkel is an apparent political rupture within her CDU Party; she is now defending her hand-selected successor, AKK, after reports surfaced yesterday that Merkel believed she was incapable of leading the German center-right coalition.  Merkel has indicated she wants the president named next month, but it is possible the appointment could become protracted.  An important side note is that if Merkel loses on Weber, look for Germany to press hard for the ECB presidency.  Jens Weidmann, the current president of the Bundesbank, is considered hawkish and his appointment could give a boost to the EUR but would be bearish for Eurozone bonds, especially the periphery.

Hardening on Brexit: The EU is making it abundantly clear that it is in no mood to renegotiate Brexit.  In fact, the current president of the EU Council (the body of EU heads of state), Poland’s Donald Tusk, indicated that he views the Pro-EU win in the elections as partly due to the hardline take on Brexit, calling the position a “vaccine” to populism.  The candidates for Tory leadership are all arguing they will renegotiate a better deal, but it is more likely that we either get a new vote or a hard Brexit before the EU changes its position.

The Populist Right and the EU: Although Tusk noted that the Pro-EU position “won,” in reality, the election showed the strength of the populist right.  Although these parties didn’t win power, they are a significant enough majority that they will have increasing influence. It is interesting to note that these parties are no longer pushing to break up the EU but instead are trying to change the EU to implement policies more to their liking, including deglobalization (against immigration and trade) and anti-environmental regulation.

Currency manipulators: The Treasury has a process whereby it can name a country a “currency manipulator,” indicating that it is using its exchange rate unfairly.  If a nation is found to have achieved currency manipulator status, the Treasury then opens an investigation which can lead to trade retaliation.  The tool has been rarely used, in part, because nearly all nations outside of a few major industrialized nations allow a full float.  But, over time, policymakers have tightened the definition of what manipulation looks like.  Although the Treasury didn’t name a particular nation as being a manipulator, it has tightened the rules and expanded the number of countries being monitored, setting up a structure to allow this process to become more important in trade policy.  Exchange rates have been an item of interest for Treasury Secretary Mnuchin (part of his department’s mandate) as he seems concerned that countries hit with tariffs will use exchange rates to mitigate the impact.

Rare earths: In recent days, China has sent clear signals that it is considering using its dominance in rare earth minerals as a weapon against U.S. trade and technology restrictions.  There is precedent for such actions; China cut off Japan from these minerals in 2010 over disputed islands in the South China Sea.  This issue will be the topic of next week’s WGR.

The tragedy in the farm belt: It has been a cold, wet spring for the nation’s midsection, with persistent flooding and otherwise lousy weather.  As a result, farmers have been unable to get into the fields to plant.  As of May 26, 58% of the nation’s corn crop has been planted compared to the past 10-year average of 90% by this reporting week.  The southern states, which have been spared from the deluge, are nearly all planted (but are now getting too dry), while Indiana and Ohio are only 22% planted.  Illinois, another key corn state, is only 35% planted.  We are rapidly reaching the point where the potential loss of yield by planting this late will force farmers into other crops.  The most likely alterative is soybeans but planting is well behind normal there as well.  Only 29% of the soybean crop is planted compared to the decade average of 62%.  There is still time for soybeans to get in the ground if the rain stops soon, but forecasts show rain continuing into the weekend.  Complicating matters is the recent tariff relief program announced by the administration which pays farmers only if they put a crop in place.  The program incentivizes farmers to plant something and the “something” is most likely soybeans.  Of course, the point is moot if the rain doesn’t let up.  Corn (shown below) and soybean prices, which have been under pressure due to Chinese retaliatory tariffs, are rising sharply on supply fears.  But, if the rain stops, there is potential for a sharp drop in soybean prices in the coming weeks.

More on Baoshang:Yesterday, we reported that Chinese financial regulators had taken over Baoshang Bank due to worries about its solvency.  There were two additional news items on this issue.  First, China appears to be forcing a 30% “haircut” on bank bondholders.  Second, the PBOC made a massive injection of liquidity into the Chinese financial system, an indicator that regulators are concerned about the stability of the banking system in the wake of the takeover.