Good morning! U.S. equities continue to rally as investors no longer fear that the Fed will become more hawkish. Additionally, a drop in mortgage rates and a strong performance from retailers have boosted investor sentiment. Today’s report begins with the rising popularity of windfall taxes. Next, we discuss the latest updates on the Russia-Ukraine war and other related stories. We comment on the latest U.S. economic and policy news, focusing on the rivalry between Washington and Beijing and waning inflation expectations. We conclude with our COVID-19 coverage.

Tax on Energy: On Thursday, the U.K. government announced that it would introduce a 25% tax on the profits of energy producers. The government will use the tax to provide subsidies of £650 in two installments to low incomes households and £300 to some pensioners. The U.K. is not the first country to push corporations to use their profits to help the country. On Wednesday, the Hungarian government made a similar request for companies to use their “excess profits” to help the government fund utility subsidies. Italy also taxed profits on energy companies to fund aid packages earlier this month.

We suspect that taxing excess profits of firms, particularly those in the energy sector, could be detrimental to resolving the oil shortage. By taxing firms for being extremely profitable, the government gives them less incentive to expand production capacity. Moreover, by using the funds for consumer subsidies, the government is disrupting the communication mechanism for the consumer to purchase less. As a result, the tax on excess profits may hinder attempts to lower prices because it does not reduce demand or encourage firms to expand capacity.

Russia-Ukraine: Russian soldiers are having more success in eastern Ukraine as the troops learn from their previous mistakes. Russian forces are advancing in Severodonetsk and are close to encircling the region. These forces also appear to be closing in on the west and south of Popasna. Despite these gains, Ukrainian officials have maintained a solid defense. 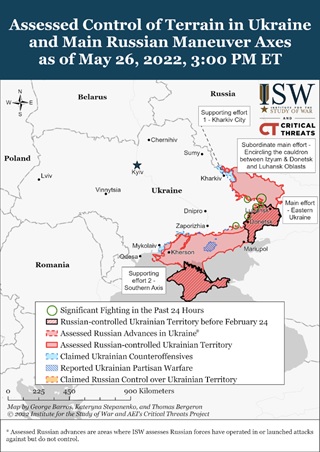