[Posted: 9:30 AM EDT] As noted below, Chair Yellen speaks later this morning.  This talk has been long awaited; however, we don’t expect too much.  In our opinion, Yellen remains dovish and would likely prefer not to move rates this year.  However, she does need to maintain control of the FOMC and so she occasionally has to acquiesce to rate hikes.  We look for a move of 25 bps in either June or July, which will probably be the last one for the year.  The market’s reaction to the anticipated hike has been quite controlled so far.  There has been an uptick in the two-year T-note yield, but not as high as we saw in December, and the dollar has rallied, but we haven’t revisited the recent highs.  Those reactions suggest that the markets are not projecting a summer move to trigger a series of future rate hikes.  To some extent, this is what the Fed has been trying to communicate; policy would only tighten gradually.  While this is good news in the short term, the policy seems strikingly similar to what the Fed tried to accomplish with its tightening cycle that ran from 2004 to 2006.  That cycle, on its face, didn’t cause the major market disruption that it needed to cause.  By not causing significant pain, risky leveraging behavior continued which culminated in the 2008 Great Financial Crisis.  So, bottom line, we don’t expect Yellen to say much and she will likely not dispel rate hike expectations for this summer.  Since this outcome is probably discounted, if we are correct, market action should be minor (especially in front of a long holiday weekend in the U.S.).

The G-7 communiqué probably disappointed the host nation, Japan.  PM Abe was trying to suggest that the world economy faces similar risk issues as seen in 2008.  The other six members of the group clearly disagreed.  We suspect Abe will use his outlook expressed at this meeting to deploy fiscal stimulation with the hope that the action will depreciate the JPY.  He would have likely preferred G-7 support but we expect him to move without it.

For those calling for a rate hike, the Atlanta FRB GDPNow forecast suggests strong support. 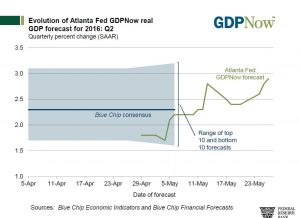 The current forecast is up to 2.9% compared to the consensus forecast of 2.4% and the initial forecast of 1.8%.  The contributions to GDP are clearly coming from consumption, which accounts for 2.46% of the 2.90%.  Residential investment is adding 28 bps (up from 8 bps in late April) and net exports is actually a positive contributor.  The primary drags on growth are inventory liquidation and commercial building. 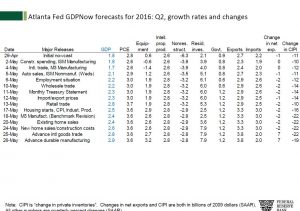 Overall, this forecast will increase the odds of a summer rate increase by the FOMC.