Good morning! Today’s report begins with a summary of the Fed meeting minutes and other central bank news. Next, we discuss the latest developments in the Russia-Ukraine war. Afterward, we go over the pushback regarding China’s zero-COVID strategy and the possibility of global famine due to the Russian blockade of the Black Sea. We end with international news and our COVID-19 coverage.

Fed Meeting Minutes: The Fed meeting minutes revealed a consensus among voting members for the central bank to hike rates 50 bps over the next couple of meetings. The minutes reaffirmed market sentiment that the central bank might push rates into restrictive territory to tame inflation. As a result, the S&P rose slightly, and Treasuries were relatively unaffected. The Fed’s decision to maintain 50 bp hikes appears to be related to its confidence that the economy is strong and capable of withstanding additional tightening. Fed members and staff shrugged off the unexpected decline in Q1 GDP as being temporary. Additionally, the group downplayed the possibility that decreases in inventory spending, government spending, as well as net exports, would persist throughout the year. Although the Fed was generally upbeat about the economy, it mentioned the Russia-Ukraine war and lockdowns in China as threats to the expansion. 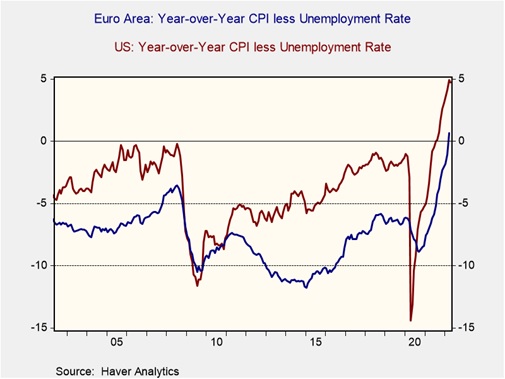 Russia-Ukraine: As the war enters its fourth month, the Kremlin faces growing criticism on social media regarding the way it is handling the Ukraine war. Bloggers on Telegram have complained that the government has not adequately supplied Russian soldiers with military equipment needed to hold off Ukraine troops. Although it is unclear how impactful these messages are on the general public, the backlash suggests the government may be losing control over the narrative. Meanwhile, the West is preparing for the possibility of a long war. NATO general Jens Stoltenberg urged countries need to be prepared to provide Ukraine with additional support. We believe that as the conflict rages on, the West will struggle to maintain its coalition. The inability of the EU to secure an agreement on the Russian oil ban reinforces the concern that this coalition may fracture in the future. If we are correct, it could mean the West could push Ukraine into accepting a ceasefire with Russia. At this time, leaders in both Russia and Ukraine have been postponing peace talks, hoping to secure more leverage. We believe such negotiations will happen sooner rather than later.

On the ground, Russian forces have entered Lyman and are closing in on Popasna. Russian troops are making gains in Ukraine but very modestly. The military is struggling to find reserves to carry out the mission.  It has raised the maximum age for army recruits and forced border guards to cancel their vacations. 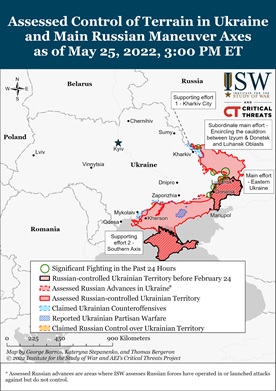 The Global Food Crisis: The Russian blockade of Ukrainian ports continues to stir fears of global famine and instability. Russia and Ukraine supply about 30% of the world’s wheat, a crucial food source for developing countries. In response to criticism, Russia has agreed to relieve some of the pressure by opening the Black Sea port for foreign ships. The move should put downward pressure on grain prices.

Zero-COVID Policy:  In a rarity, Chinese Premier Li Keqiang openly acknowledged that the zero-COVID strategy is harming the economy. In a meeting with multinationals operating in China, Li offered reassurances that the country would do its best to expand vaccinations. In addition, conceding the need for increased vaccinations, Li warned that the Chinese economy could struggle to avoid a contraction in the second quarter. His remarks highlight the growing unease among members of Chinese leadership about Xi’s decision to reimpose COVID-19 restrictions.