[Posted: 9:30 AM EDT] The GDP data (see below) came in much better than forecast and that is giving a bounce to equities this morning.  It’s a long Memorial Day weekend, which usually means the afternoon trade will become very thin and sluggish.

The big news overnight was that the Conservatives’ lead in U.K. polls has evaporated to a mere 5%, down from 20% a couple of weeks ago.  The election will be held in less than two weeks, on June 6th.  May called for early elections due to strong polling and disarray in the Labour Party.  There is no evidence that that order is being restored to Labour; today, Corbin (the Labour Party leader) blamed U.K. foreign policy for terror attacks in Britain.  That isn’t a mainstream view.  So, why is the lead narrowing?  This may reflect a broader theme of disenchantment with the establishment in Britain.  First, they voted in favor of Brexit, and second, in what would be the ultimate snub, we are seeing a surge in the polls for a party whose leader is considered wildly outside the mainstream.  If Labour were to win, it would be profoundly bearish for the GBP and British equities.  We do note that the betting sites still show a 90% probability that May will prevail.  But, she really needs a landslide to help her negotiate the best deal possible from the EU.  A narrow win will tend to undermine her bargaining position.

President Trump made headlines in Europe for a number of actions, including an apparent stiff-arming of the leader of Montenegro, Filip Vujanović, refraining from confirming his support of Article 5 of the NATO charter (the one on collective defense) and calling the Germans “bad” for running trade surpluses with the U.S. and threatening to apply tariffs to German vehicles.  Regarding collective defense, although there is great concern about this issue, it should be noted that the U.S. still has a sizeable military presence in Europe and would certainly defend the continent if it were attacked.  The lack of confirmation is worrisome, but it is likely designed to boost European defense spending and not signal a U.S. pullback…at least not yet.

Although the German press is apparently up in arms about being called “bad,” it should be noted that the quote, initially reported in Der Spiegel, was not attributed and may have come from a third-hand source.  Administration sources did try to walk back the comment, suggesting the president didn’t mean the German people but instead the trade situation.

Although the president’s comments may have been undiplomatic, he actually has a point.  First, Germany does run a persistent trade surplus with the U.S. 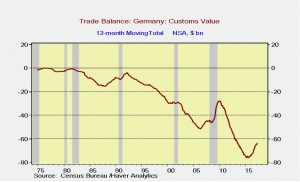 On a rolling 12-month total, the German trade surplus with the U.S. is nearly $64 bn.  The EU surplus is $146.6 bn, with Germany representing 44% of the surplus.  As we detailed in our recent WGR series on trade, Germany runs a domestic policy designed to generate saving; essentially, they export this saving to the world and import demand.  This is the root cause of the problems in Europe.  At least the U.S. has the protection of a floating exchange rate where a weaker dollar can blunt some of Germany’s policy.  The nations of the Eurozone have no such protection. 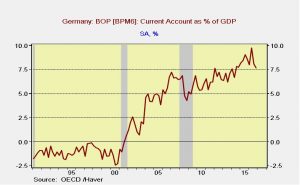 Its surplus runs 7.6% of GDP, well above norms that suggest anything over 3% is a deliberate policy designed to “beggar thy neighbor.” 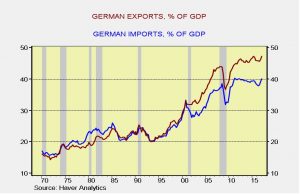 This chart shows German imports and exports scaled to GDP.  Exports represent 47% of Germany’s GDP.  It does also import 40%.  However, note that with the onset of the Eurozone in 1999, trade surpluses have become persistent.  In effect, Germany is treating the Eurozone much like 19th century European powers treated colonies—a venue to absorb excess output.

So, the president does have a point.  German policy is designed to export and it probably can’t continue without significant political repercussions, e.g., trade restrictions from outside the Eurozone, and a breakup of the Eurozone itself.  His expression of displeasure was inartful but isn’t untrue.  Germany would be better off if it absorbed some of its domestic saving in higher public or private consumption.  However, we don’t expect that policy to change anytime soon.  Thus, rising trade conflicts are likely, both outside and inside the Eurozone.