[Posted: 9:30 AM EDT] Last week, the finance ministers of the G-7 met; now the leaders are meeting.  There is no lack of topics for discussion.  Although China isn’t a member, there has been some discussion of China’s activity in the South China Sea.  China, of course, suggests that this isn’t a proper issue for G-7 discussion.  The G-7 apparently disagrees and says it will send a “strong message” on this issue.  Much of the discussion centered on the global economy.  President Obama took some time out of his schedule to make disparaging remarks about Donald Trump.  Probably the most important post-meeting issue will be Japan’s handling of the JPY.  We would not be surprised to see Japan take steps to weaken its currency in the wake of this meeting.

The FT reported on a Conference Board study that focused on weak productivity in the U.S. 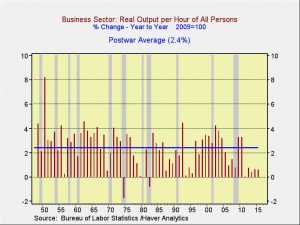 This chart shows the annual change in real output per hour worked with the postwar average.  Clearly, since 2011, real output per hour work has slumped; it isn’t completely clear why.  Some of this could simply be that there is excessive productive capacity in the economy compared to demand, and so the economy may not be able to efficiently produce what we need.  A more likely reason is that workers are flooding the low productivity parts of the economy which pay little but are mostly protected from technology and globalization.  That would explain a good bit of the wage disparity.  Raising wages in these sectors will simply force these industries to deploy automation (in fact, a former CEO of a fast food firm warned today about lifting the minimum wage due to this threat).

Oil prices moved above $50 this morning.  Yesterday, the DOE reported that oil inventories fell 4.2 mb last week, more than the 1.6 mb decline expected.  It does appear that the Alberta fires probably cut imports and led to the bigger than expected decline (we participate in the various media surveys and were projecting a 3.0 mb draw).  Crude oil inventories remain elevated but are clearly in the seasonal liquidation period. 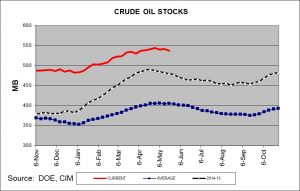 This chart shows the current level of stockpiles, along with last year’s storage level and the five-year average. 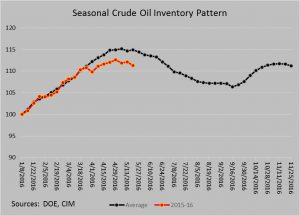 This year’s seasonal pattern is showing faster than normal withdrawals because of the unexpected drop in inventories recorded in early April.  Since then, stocks have been reacting fairly close to normal but have failed to narrow the gap.

Based on the average EUR exchange rate and current oil inventories, fair value for crude oil is $40.72.  Assuming a €/$ exchange rate of 1.133 (the current closing average, month to date), the current price has discounted oil inventories of approximately 480 mb, or 57 mb below current levels.  That would be a much faster decline in the inventory overhang than the current pattern would generate.  Although we are friendly to oil longer term, the oil market has already discounted a significant storage withdrawal that is probably not going to happen.  In other words, the current price is a bit rich based on the dollar and inventories.