In today’s Comment, we open with the latest details on the Belarusian “state hijacking” and its impact on geopolitical relations between the U.S., Europe, and Russia.  We then continue with other international news ranging from China and Russia to Turkey and Ecuador.  We end with the latest developments on the coronavirus pandemic.

European Union-Belarus:  EU leaders imposed new sanctions on Belarus and banned Belarusian airlines from entering EU airspace to punish the Lukashenko government for an incident over the weekend.  A jet fighter was ordered to force a civilian airliner flying over Belarusian territory to land and then arrested an opposition journalist on the plane.  Separately, British Foreign Secretary Raab said the U.K. was suspending the Belarusian national airline’s permit to operate in British airspace and would advise British airlines to avoid the former Soviet Republic’s airspace.  President Biden said his administration was also considering punishments.

United States-China:  Goldman Sachs (GS, $368.29) won approval from Chinese regulators to launch a joint-venture asset management company in China with the Industrial and Commercial Bank of China (IDCBY, $12.70).  That follows an announcement earlier this month that BlackRock (BLK, $872.36) won approval for a joint venture with the China Construction Bank (CICHY, $15.86).

United States-Russia:  The U.S. and Russia may be ready to announce a date for the first summit meeting between Presidents Biden and Putin.  In a news conference today, Kremlin spokesman Dmitry Peskov told reporters an announcement related to a summit would be coming “soon.”  Based on its sources, a Swiss newspaper yesterday said the summit will be held in Switzerland.

Global Commodity Sector:  Even though the post-pandemic commodity boom is boosting profits for miners, they aren’t throwing cash at new projects, raising concerns about future shortages and higher prices for some metals.

Turkey:  In the latest sign of political interference in Turkish monetary policy, President Erdogan has dismissed Oguzhan Ozbas, one of the central bank’s deputy governors and a member of its monetary policy committee.  He replaced him with Semih Tumen, a presidential adviser and a professor of economics at TED University in Ankara.  Erdogan has now replaced three senior central bank officials in just the last two months, on top of numerous other personnel changes in recent years.  He makes these moves as he pushes his unconventional view that high interest rates are a cause, rather than a cure, for Turkey’s high inflation and financial problems.  In response, the lira has plunged some 14% since March, although the currency has reacted little to today’s news. 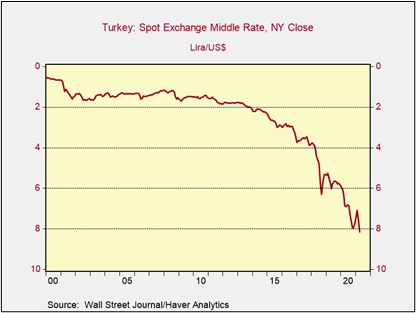 Ecuador:  Conservative businessman Guillermo Lasso was sworn in as the country’s new president yesterday.  In his inauguration speech, Lasso decried corruption and authoritarianism and vowed to address the country’s massive economic and social challenges.