[Posted: 9:30 AM EDT] The FOMC minutes held no surprises—barring a sudden downturn in the data, the next rate hike will come on June 14.  Dallas FRB President Kaplan gave a speech in Toronto yesterday and indicated that he expects two more rate hikes this year; thus, if they do move next month, as expected, there would only be one more hike this year.  As we have noted in the past, the key issue for policymakers is the correct measure of economic slack.  If it’s the unemployment rate, the Fed needs to raise rates into the 4% range to achieve neutrality.  If it’s the employment/population ratio or wage growth for non-supervisory workers, then the fed funds target is near neutral now.

In terms of the expected balance sheet reduction, the FOMC is considering a plan that would set limits on the amount of bonds that would be allowed to “roll off” each month.  If there were more bonds that reached maturity than the limit, those would be reinvested.  Over time, the limits would be raised to allow for more bonds to roll off.  This appears to be a very gradual approach likely designed to reduce potential market volatility.  We expect more details to emerge as we approach year’s end. 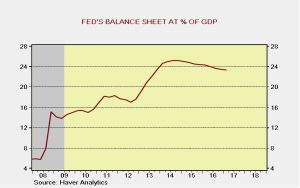 Although we don’t have any details yet, we are assuming that the Fed is probably going to target a balance sheet roughly around 10% to 12% of GDP.  We expect that, at most, the Fed would reduce the balance sheet by about $50 bn per month; with 4% nominal GDP growth (growth has been around 3.7% since 2011), the balance sheet will stabilize around 2021 at around $3.6 trillion.

U.K. PM May is reportedly “furious” at information leaked to the U.S. press about the recent terrorist bombing in Manchester.  The NYT published pictures of evidence that seem to show a well-crafted bomb.  The bomb suggests a broader conspiracy; so far, seven people have been detained, including the bomber’s brother and father.  According to reports, May intends to confront President Trump on the leaks and then return to Britain, returning early from the G-7 meeting.  The most recent polls show a widening of the Tories’ lead, to 14% from 9% prior to the terrorist event.  PM May was Home Secretary under PM Cameron and is considered strong on security.

Oil prices have slumped this morning despite OPEC agreeing to a nine-month extension of its current output agreement.  The market narrative is that oil prices are lower on disappointment that new cuts were not announced.  We doubt that’s the case.  This look more like classic “buy rumor, sell fact” market action.  Overall, the extension is supportive for oil prices but the recent rally has put oil prices in the middle of our expected range, meaning some price consolidation is plausible.

This chart shows current crude oil inventories, both over the long term and the last decade.  We have added the estimated level of lease stocks to maintain the consistency of the data.  As the chart shows, inventories remain historically high but they are declining.  We also note that, as part of an Obama era agreement, there was a 0.4 mb sale of oil out of the Strategic Petroleum Reserve.  This is part of a $375.4 mm sale (or 8.0 mb) done, in part, to pay for modernization of the SPR facilities.  International agreements require that OECD nations hold 90 days of imports in storage.  Due to falling imports, the current coverage is near 140 days.  Taking that into account, the draw would have been 4.9 mb, which is well below expectations.

As the seasonal chart below shows, inventories are usually just starting their seasonal withdrawal period.  This year, that process began early.  Although the actual level of stockpiles remains quite high, we are seeing stock declines at a rather rapid pace.  Assuming a similar drop from this year’s peak of 566.5 mb at the end of March, we will end up at 510 mb by late September. 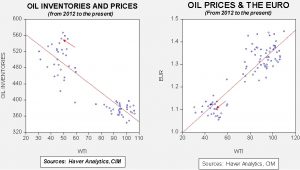 Based on inventories alone, oil prices are overvalued with the fair value price of $34.32.  Meanwhile, the EUR/WTI model generates a fair value of $48.17.  Together (which is a more sound methodology), fair value is $43.87, meaning that current prices are above fair value but the deviation has been steadily closing in recent weeks.  We note that OPEC looks like it will keep production cuts in place into next year, which probably keeps oil in a range of $55 to $45, basis WTI.