Good morning.  After a strong rally off the lows on Friday and impressive follow-through yesterday, risk assets are lower this morning.  However, one pattern emerging in the past couple of weeks is that the correlation between stocks and bonds has again become inverse.  Since about May 6, we have seen the inverse pattern that has mainly been in place since the mid-1990s and is the backbone of the 60/40 portfolio.  We remain cautious about the long-term path of this relationship.  If inflation becomes persistent, higher bond yields are probably unavoidable. The fact the pattern has returned suggests that (a) the market thinks the current yield on longer duration Treasuries is “about right,” and (b) the debt markets believe the Fed will defend bond values against inflation.

In today’s Comment, we open with China news, focusing on the aftermath of President Biden’s statements on Taiwan.  From there, we take a look at economic news.  The Ukraine update follows.  International news comes next, and we close with the pandemic update.

China news:  Was it a gaffe, or not?  As we reported yesterday, President Biden seemed to end the U.S. policy of strategic ambiguity regarding Taiwan.  Within 24 hours, the White House tried to walk the comments back, suggesting “nothing has changed.”  To be fair to the president, strategic ambiguity has been fraying for some time.  We note that SoS Blinken once referred to Taiwan as a “country,”  and it isn’t the first time the president has suggested the U.S. would defend the island militarily.

So, has anything changed?  In some ways, yes, but in others, no.  What has changed?  Japan seems much more committed to the defense of Taiwan.  As we have noted before, Taiwan in the hands of Beijing is an existential threat to Tokyo.  What remains the same?  We seriously doubt anyone in China’s leadership believes the U.S. would not come to the aid of Taipei if China tried to invade Taiwan.  That isn’t anything new.  The rhetoric surrounding the president’s remarks in Beijing will escalate; if the PLA hasn’t been pondering how to thwart American defense efforts in its invasion plans, they should be relieved of duty.  We note that within the international relations community, the end of strategic ambiguity is being widely cheered.  The primary benefit of ending strategic ambiguity is that China won’t be as likely to miscalculate, assuming the U.S. won’t act; that was, in part, why the Korean War occurred.  However, as noted above, the odds of such a miscalculation were small anyway.  The most serious risk of ending the policy is that it reduces American optionality and might lead to less cautious behavior on the part of Taiwan.  We still view Taiwan as a chief point of geopolitical risk; the president’s “gaffe” doesn’t change that.

Larry Summers has been a problem for the administration.  He criticized the fiscal stimulus in 2021, saying it would likely lead to higher inflation.  Although fiscal spending wasn’t the only reason for inflation, it certainly contributed.  He is now attacking the idea that industry concentration leads to higher prices.  The basic issue is that industry concentration can improve efficiencies but also gives market power to firms.  Firms can decide how to allocate the gains to efficiency because they have market power.  Since the mid-1980s, when the Bork Standard for antitrust emerged, firms have mostly allocated these efficiencies to profits and consumers by keeping price hikes contained.  Labor has generally been excluded from benefiting from any efficiencies. 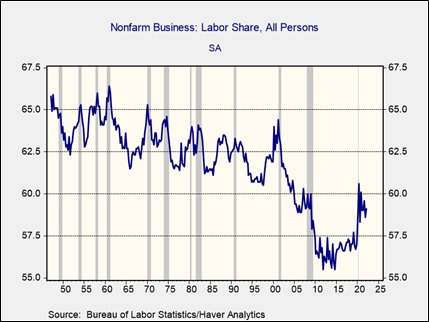 This chart shows the share of output going to labor.  The trend was mainly declining but clearly accelerated this century.  So, back to Summers’s argument.  He contends that antitrust action might actually lead to higher inflation if it undermines the efficiencies from concentration.  But, that is true only if two conditions are met.  First, increased competition should make it more difficult to pass along high costs.  Second, it appears that Summers believes current profit margins will be maintained.  With S&P 500 earnings nearly 8% of GDP, an all-time record, it seems reasonable that a return to trend could allow for antitrust to at least not contribute to higher inflation.  At the same time, we think the administration is overstating the case for antitrust to bring down inflation.  It’s easier to blame industry concentration for inflation than to cool the economy by cutting spending and raising taxes.

The Ukraine War:  The conflict appears to be evolving into a trench war, with both sides building fortifications to thwart offensive actions.  Here is the latest map: 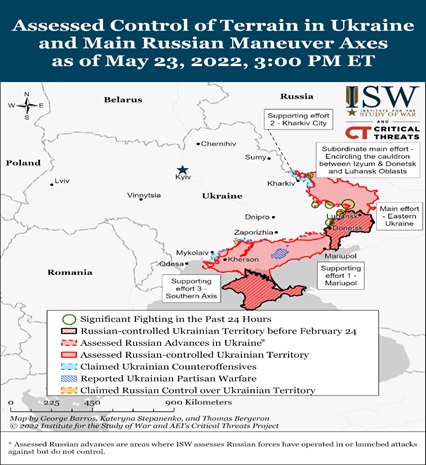 International roundup:  A big deal is in the works and more from the president’s trip.

COVID-19:  The number of reported cases is 526,196,860 with 6,278,868 fatalities.  In the U.S., there are 83,393,876 confirmed cases with 1,002,385 deaths.  For illustration purposes, the FT has created an interactive chart that allows one to compare cases across nations using similar scaling metrics.  The FT has also issued an economic tracker that looks across countries with high-frequency data on various factors.  The CDC reports that 741,676,155 doses of the vaccine have been distributed, with 584,449,398 doses injected.  The number receiving at least one dose is 258,174,992, while the number fully vaccinated, which would grant the highest level of immunity, is 220,933,970.  For the population older than 18, 76.5% of the population has been fully vaccinated, with 61.1% of the entire population fully vaccinated.  For those over 65, 90.9% have been fully vaccinated.  The FT has a page on global vaccine distribution.